A chance to talk about gibbeting and hanging in France? Yes, please! By Emma Battell Lowman

Posted by Emma Battell Lowman in The Power of the Criminal Corpse on February 22, 2016

One of the joys of academic work is participating in study days or workshops that bring together a diverse group of scholars to approach a theme or issue from multiple vantage. It is easy to fall into working within the same networks and groups – whether textually in the form of the bodies of literature we use, or disciplinarily keeping to approaches that maintain or take for granted certain parameters, or interpersonally by engaging with the same group of scholars with whom we have already developed relationships. Done right, study days can explode our well-worn trenches of habit and stimulate exciting ideas and discussions. What do I mean by ‘done right’? Well, that has to do with the quality of organization including setting the intention for the day, fostering connection and communication through formal and informal times and over food and drink, and inviting people passionate about their work whose research brings something new to the conversation. Mathieu Vivas and Martine Charageat of the University of Bordeaux Montaigne did just that last week at their study day “Hanging, suspending, and cutting down from the Middle Ages to the Modern”.

Mathieu and Martine brought together archaeologists, historians, medievalists, medical researchers, biomechanical investigators, and forensic specialists to share research around the theme of the gallows and the hanged or suspended body. I had the privilege of participating because the organizers invited Sarah Tarlow, author of “The Technology of the Gibbet” to speak on that work and Sarah arranged for me to attend as her postdoc and to deliver our presentation.  It was wonderful. Mathieu spoke first, outlining the themes and questions he is pursuing in his research on hanging, gibbeting (and suspension of bodies), and removal of bodies from the gallows. His work is archaeological and historical and spans the medieval to the modern and while focused on France brings in work from many European nations where research on this subject is more advanced. Anne Lafran spoke next on “The Hanging of Judas or the Punishment Without End”. 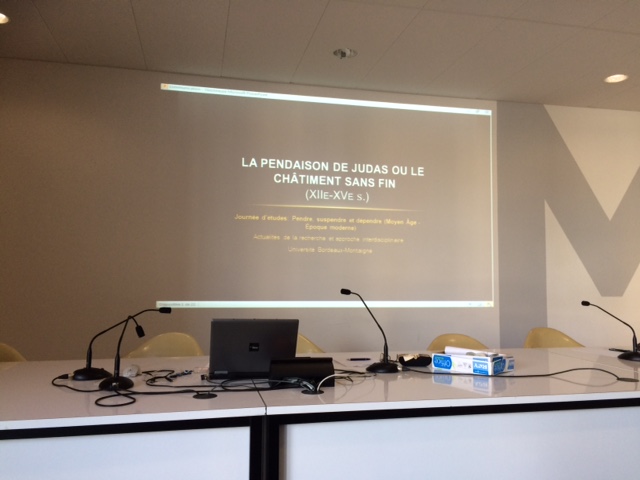 Anne’s work engaged representations of the hanging of Judas as well as biblical passages (from several sources) and raised questions of the distinctions between suicide and punishment, and how understandings of the physiology of Judas’ death shifted over time and why. From investigating this archetypal case we then moved to our presentation, “The Technology of the Gibbet”. Sarah’s work on gibbeting (‘hanging in chains’) in Britain as part of the Harnessing the Power of the Criminal Corpse project has broken new ground and was held up as critically important beyond Britain as gibbeting has received scant scholarly attention in other European contexts. The intention of our presentation was to introduce an unfamiliar but interested audience to the gibbet in 18th and 19th century Britain, its purpose, use, and construction. We emphasized the importance of security, visibility, durability, and movement to the construction of gibbets – a technology that encompasses the gibbet cage in which the body is secured, the tall wooden gibbet post, the cross beam, the short chain or hook attaching the gibbet cage to the cross beam, and the place in which the gibbet is erected. This research was based on historical sources, the expense claims for gibbet construction submitted for reimbursement by the Sheriffs responsible, and an exhaustive inventory of extant gibbet cages (whole or partial). We also considered who was gibbeted and why, and addressed the differences between gibbeting and dissection – punishments that were considered legally equivalent under the Murder Act (1752-1832) – in Britain.

In the afternoon session, Michel Sapanet took up the physiology of gallows erections and emissions observed in hanged men and connected this with legends about the reproduction of the mandrake (which at one time was said to grow from the ejaculate of hanged men on the gallows) and present-day interest in and practices of male autoerotic asphyxiation. The medical angle continued with Stephane Chapenoire and Michel Benezech’s work on singular cases of present-day hanging and the ways it is possible to distinguish between hanging as murder, as post-mortem suspension, and as suicide. The final presentation came from Lionel Thollon and Maxime Llari whose research investigates the biomechanics of injuries resulting from unsupported cutting down of hanged bodies. Their work involved experiments with cadavers in order to produce a highly nuanced virtual model that can be used to help determine when injuries to hanged bodies are likely to have occurred due to their release from whatever was used to suspend them and the subsequent impact with the ground, or if such injuries – including cranial traumas – were unlikely to arise from that process and might be signs of other pre- or peri-mortem violence.

Martine and Mathieu built in ample time for questions, and this allowed conversations to develop over the course of the day. Further, their attention to providing coffee breaks (with lovely French pastries) for the attendees – which included a large group of rather wonderful students – and a 3-course lunch for speakers fostered opportunities to continue conversations started in the sessions and for participants to get to know one another in collegial and less formal interactions. Throughout the day, we also laughed together. The theme and our individual presentations were not in themselves funny; these are serious and sometimes disturbing subjects. But the ability to share moments of levity is important to long-term survival in research on difficult situations and specifically was essential to bringing the group together into a shared space of respectful, challenging, and productive work. 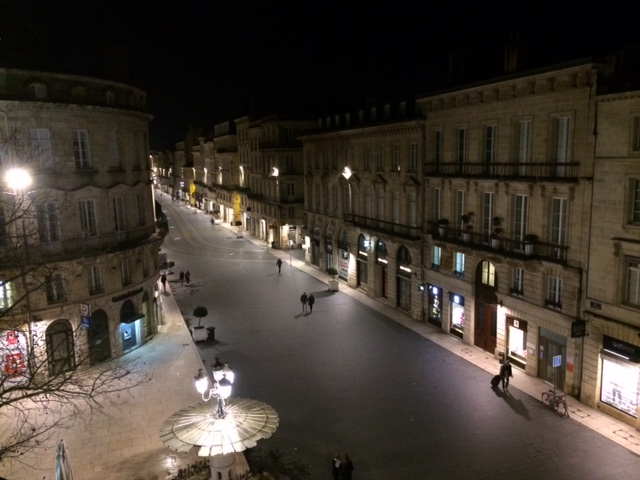 The organizers chose a hotel right in the centre of beautiful Bordeaux, a great place from which to explore the city and launch into a great study day.

I came away from this day energized and intrigued. The possibilities for connecting our largely British-based work to new research in France are exciting and open opportunities for all involved. Connecting our project’s work to medieval research on punishment, hanging, and representations as well as to modern medical research will strengthen aspects of our research outputs that are currently in progress, hopefully improving and increasing their utility to colleagues. I was inspired by Mathieu’s work and am already thinking forward to our next event together. I also appreciated the chance to step into French scholarly spaces and practices. Research culture and structure differs from place to place, and in Bordeaux I experienced the respect hierarchy of French academe as a positive influence in scholarly spaces – the highly-engaged students waiting out of respect until senior staff had been served at coffee breaks before helping themselves; the importance of researcher contributions and discussions over keeping strictly to schedule; and great care and attention to introductions that helped to situate each participant in wider networks and research relationships. It all made for a brilliant day. 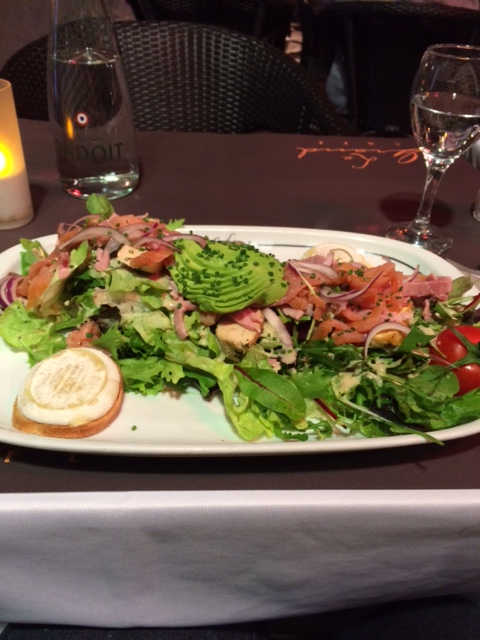 Finally, I appreciated the chance to participate in crossing implicit language barriers in research. Mathieu had looked to Sarah’s research because there was almost no French-language scholarly writing on gibbets. At this study day, I had the chance to use my French in a new research context and was able to follow the presentations, evidence, and arguments of the other speakers. A translation webpage on my phone helped me with a few unfamiliar terms (weirdly, I required no additional help to follow Michel’s presentation on penises…).  Thanks to encouragement from Martine and Anne, I delivered our presentation in French – or at least, mostly in French with occasional vocab help from the floor. This was outside my comfort zone, and absolutely worth it for the way it facilitated connection and communication with the other participants. The point is not to be word-perfect but to be less concerned about making mistakes than about improving the scope and usefulness of our work.

I came home to Leicester re-energized about my work on the criminal corpse, and extremely grateful to Mathieu and Martine for their generous invitation and to Sarah for the opportunity to represent her work and our project team. It was also a wonderful thing to pop over to France for a quick visit, certainly one of the benefits of being located in the English Midlands is the ease of travel to Europe. I hope that means I’ll get to do this again.