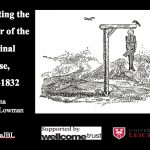 Posted by Emma Battell Lowman in The Power of the Criminal Corpse on April 19, 2016

In late March 2016, the Social History Association (SHA) met for its annual conference. In beautiful Lancaster, at the University of Lancaster, a large group of energetic scholars met to share new research, connect with colleagues, and celebrate four decades of successful operation. This was my first engagement with the Association. I have hesitated […]