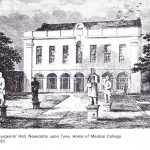 The Bloody Business of the Bloody Code: Dissecting the Criminal Corpse. By Elizabeth Hurren

Posted by Emma Battell Lowman in The Power of the Criminal Corpse on May 3, 2016

Imagine hearing local gossip that a notorious murderer was about to be executed, and that everyone in the vicinity of a homicide was planning to turn out to see the violent culprit punished in Georgian England. Getting to the gallows to secure a good spot would mean having to take an unpaid half-day off […]