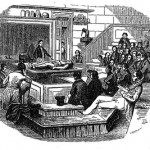 The Criminal Corpse and the Competing Claims of Justice and Anatomy. By Richard Ward

Posted by Emma Battell Lowman in The Power of the Criminal Corpse on December 21, 2015

The later eighteenth century represents a particular moment when the competing claims of anatomy and criminal justice fought for supremacy over the criminal corpse. In both 1786 and 1796, schemes were put before Parliament that sought to extend the 1752 Murder Act by handing surgeons the bodies of offenders executed for a whole range of […]