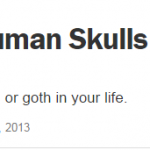 Being Disturbingly Informative. By Shane McCorristine

Posted by Emma Battell Lowman in The Power of the Criminal Corpse on October 31, 2016

Last year I visited a fine old building nestled incongruously close to the skyscrapers and busy financial offices of Market Street in downtown Philadelphia. The building houses the College of Physicians of Philadelphia, the oldest private medical organisation in the United States (founded in 1787). Today, Philadelphia’s heyday as the centre of medical and […]