Posted by Emma Battell Lowman in The Power of the Criminal Corpse on October 1, 2015

In the two months since joining the Harnessing the Power of the Criminal Corpse project at the University of Leicester, I like to think I’ve become a highly desirable dinner guest. Before what I’m calling my CrimCorpse period, I could be relied on to chat socially about the weather, dogs, the latest series of RuPaul’s Drag Race, or ongoing settler colonialism and its accompanying dispossession and genocide of Indigenous peoples (an important subject on both the continents I call home). Now, however, I’m also brimming with enthusiasm for the history of the treatment and uses of criminal corpses in British history and overflowing with gruesome archival anecdotes thanks to immersion in the excellent research of the HPCC project team. And you know what? People love hearing disgusting stories.

The first one that leapt of the page was from the project’s Principle Investigator (and fearless leader), archaeologist Sarah Tarlow. In Sarah’s 2010 book, Ritual, Belief and the Dead in Early Modern Britain and Ireland, she described the state of bodies post-dissection or post-autopsy as having undergone extensive modification. In the case she described, the spine, rib cage and bodily organs had been removed, leaving only a “skin bag” with attached arms, legs, and head which then required stuffing and sewing up to create something body-like for burial.

Possibly better not to say that one when someone actually has food in their mouth. It still gets me at the back of the throat. 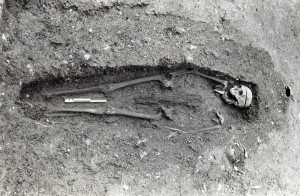 The skeleton has spine, pelvis and shoulders removed. The torso was given shape by the inclusion of a stake of burned wood. Image thanks to Warwick Rodwell – Barton upon Humber.

The second one that had me put my head between my knees for a moment in the project office came from reading the fascinating and vividly-described research of historian Elizabeth Hurren. In Elizabeth’s forthcoming book, Dissecting the Criminal Corpse: Staging Post-Execution Punishment in Early Modern England, she describes the physiognomy of hanging, and in particular the effects of hanging (as a method of execution) on the female body. She noted that the bodies of hanged men tended to show signs of ejaculation but that there was a response in women’s bodies to hanging also: spontaneous menstruation.* Whoa. I’d had a rudimentary understanding of the effect of hanging on male bodies – per the well-known “he’ll piss when he can’t whistle” – but had stopped short of thinking about what the effect may be on women’s bodies. From the responses of conversation partners, I was not alone in this oversight.

There are so many gruesome details, anecdotes, and stories in research on criminal corpses which are legitimately fascinating and horrifying. And it is this mixture which seems sure to attract interest, and as such, form the basis of some pretty energetic and engaging dinner conversation.
But in the experience of coming to know this subject, and of working with the visceral and vulnerable stories of women, men, and children executed in Britain and in the British Empire, these moments – my moments – of revulsion and revelation are important beyond the sensationalist opportunities that learning (and sharing) these stories may create.

These shocking moments jar me from the detachment of researching at such an experiential and temporal distance from these historical subjects. As I encounter these gruesome stories on the page – and as they encounter me – it is impossible to ignore the indignities, harms, and hopes in histories involving complex individuals, families, and communities. These moments refuse passivity, and remind me of my responsibilities as a researcher to work carefully with the difficult and sensitive stories and histories of others. These are concerns I have carried in other work, particularly in the violent settler colonial contexts of historical and present-day Canada. And though my work with HPCC is taking me very different geographical, temporal, and theoretical directions, the dead are still with us and to tell their stories requires “practising respect, reciprocity and responsibility with the human, living, physical, and spiritual world.”** Learning how to do this in a new context will be uppermost in my mind in the next few months, and if you’d like to have me over for dinner, I’d love to hear your thoughts.

* I won’t give away any more on this subject, so do read Dissecting the Criminal Corpse – chapter 3 for more.
** Emma Battell Lowman, “Indigenous Methodologies, Missionary Lives” (PhD Diss., University of Warwick, 2014), 9.