Post-Mortem Punishment: A Fate Worse than Death? By Rachel Bennett

Posted by Rachel Bennett in The Power of the Criminal Corpse on September 14, 2015

A key question I have repeatedly asked myself in the researching and writing up of my PhD thesis, and one that permeates the Criminal Corpse project, asks why punish the dead? The 1752 Murder Act placed the post-mortem punishment of the corpse at the centre of the criminal justice system in Britain as it stipulated that the bodies of all convicted murderers were to be either publically dissected or hung in chains. It explicitly stated that this was in order to add “some further terror and peculiar mark of infamy” to the punishment of death and to “impress a just horror in the mind of the offender, and on the minds of such as shall be present, of the heinous crime of murder”.

However, the question of whether or not these post-mortem punishments met the ends of the act needs to be further unpicked. We need to question if, and why, they were viewed by the condemned criminals and the spectators as being worse than the death sentence itself. When Robert McIntosh was convicted for murder in Aberdeen in 1822 his father actually travelled to London in order to petition, unsuccessfully, for a remission of the part of the death sentence directing that his body be handed over for dissection. Similarly, following her capital conviction for murder in 1823 Mary McKinnon had seemingly accepted her fate but beseeched the visitors she received in the prison to see that her body was decently buried. It was reported that, when the part of the sentence ordering her body to be sent for dissection had been read out in the court room, she had been in a “state of insensibility”. Her attendants had “very humanely kept her ignorant of the circumstance”.

As well as the evident trepidation on the part of some criminals, the post-mortem punishment of the body also had the potential to affect the spectator. Evidence of this can be found in the adverse reactions I have explored in my research to both dissection and hanging in chains, despite the fact that the public executions themselves had passed without any reports of unrest. For example, the execution of James Glen in Glasgow in 1827 was reported to have passed without incident and the crowd was described as having maintained the utmost order. However, when the body was lowered into the coffin to be conveyed to the Professor of Anatomy at Glasgow University for dissection there was a shift in the mood of the crowd. They followed the body in procession from the place of execution to the university and attacked the man driving the cart carrying the body. Furthermore, those in attendance during the experiments in galvanism on the body of Matthew Clydesdale in 1818 reacted with a mixture of shock, fascination and horror at the sight of his convulsing body. 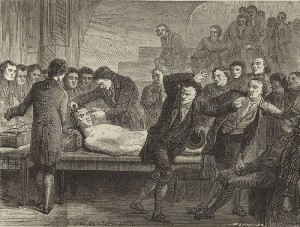 Galvanic Experiments on the body of Matthew Clydesdale, 1818.

If an offender was sentenced to be hung in chains their body would be encased within the gibbet cage, which was usually made of iron. The cage would then be suspended from an upright post with a projecting arm. It was certainly a visually impressive punishment intended to make a stark and lasting example to those who encountered it. 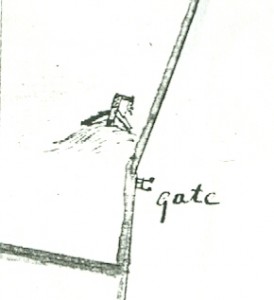 David Edwards’ gibbeted body in Ayr following his execution in 1758.

However I have found cases where the bodies were illegally removed from their gibbet cages for a variety of reasons. In the cases of Andrew Marshall in 1769 and James McLachlan in 1779 it was the inconvenience their presence caused to the local farmers that had prompted their removal. However, in other cases it was a desire to see the bodies buried that had motivated people to take them down. Often these burials were in shallow graves, sometimes at the foot of the gibbet, and were makeshift at best. This suggests that the burial of the bodies was not prompted by any particular sympathy for the criminals, who had often committed heinous murders, and was more about removing their rotting corpses from sight and smell. Attending an execution was one thing but witnessing the prolonged decay of a body, and having it entrenched within the landscape indefinitely, was quite another.

Rachel Bennett is currently in the final year of her PhD which has been conducted as part of the Wellcome Trust funded project, Harnessing the Power of the Criminal Corpse. Her thesis investigates the use of capital punishment in Scotland in the eighteenth and early-nineteenth centuries. A central area of her research questions the uses, meanings and treatment of the criminal corpse beyond the point of physical death.