During my PhD study and for the first ten years of my academic career, I researched alone. I went to the archives, I discussed and presented my work to academic audiences, and I published books and academic papers. Though like many others, I felt myself to be engaged in a larger intellectual project (subaltern studies, […]

Thinking sociologically about the history of convicts and penal colonies

Posted by Clare Anderson in Carceral Archipelago on February 25, 2016

In the early 1990s I had the privilege of studying with David Garland, then teaching and researching in Edinburgh University’s Law School. He had recently published a wonderful book – Punishment and Modern Society: a study in social theory – which remains as relevant and important today as it was then. Week by week, Professor […] 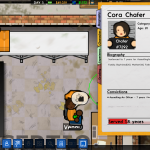 Posted by Katy Roscoe in Carceral Archipelago on January 24, 2016

When my other half pointed out that there was a computer game where you could run your own prison, he probably didn’t think I would actually play it. After all, I spend enough of my free time (and his!) thinking and talking about convicts. Nevertheless, it struck me that a computer game might be a […]