Western Australia welcomed the transportation of convicts in 1850 as a solution to the economic problems which had affected the colony since its foundation as a free settlement in 1829. However, the 1857 Penal Servitude Act significantly altered the kinds of convicts being sent as deportation was discontinued for sentences shorter than fourteen years. As a result, it quickly became apparent to the colonists that a significant number of the men who were transported after this period were no longer as beneficial to the colony. (1) A particular concern of the colonists was the mental health of the arriving convicts, resulting in demands to build a secure institution on the outskirts of the colony. Yet, despite the detailed records created by both the convict system and the Colonial Office questions regarding the colonists sudden desire to establish a lunatic asylum remain.

Whilst the number of convicts recorded as insane remained relatively low during the colony’s first decade as a penal colony, the ‘authorities’ inability ‘to dispose of them’ was a concern for the colonists from the beginning. (2) By October 1857, twenty cases of lunacy were recorded by the convict establishment. Although the colonists requested their removal to a specialist facility ‘in some cheerful part of the country’, the colony’s financial situation dictated a ‘cramped’ warehouse in Fremantle was to be used. (3) This newly formed asylum was under the control of the Comptroller General of the Convict Establishment, and accommodated the convict patients with both physical and mental illnesses. 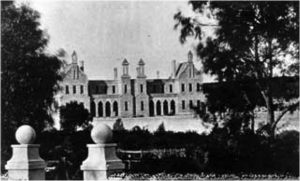 It was almost five years in 1862, before building commenced for a permanent lunatic asylum and a further two years before its completion. In July 1864 convicts identified as mentally ill were removed from their temporary housing to the Fremantle Lunatic Asylum, which provided spacious, ventilated rooms with a pleasant look-out over land and sea. (4) Dr Attfield, the surgeon superintendent of the asylum, expressed his belief that the new building would provide a stimulating environment for recovery. However, the increase in convicts being committed to the asylum often hindered his attempts. One of the most frustrating aspects for the staff was the range of reasons being utilised in the committal of convicts. For several years Attfield had struggled to classify the behaviour of some of the criminal patients within his care. In 1859, he wrote a letter to the comptroller general, stating that a significant number of the convicts knew they were ‘irresponsible for their acts’ whilst in the asylum, therefore the temptation to ‘swear, bluster and do mischief’ without punishment was ‘quite enticing’. (5) He went on to condemn this type of patient stating that ‘their insanity is equally as doubtful as their sanity’ and would retard the cure of the really insane. (6)

Another subject which Attfield alluded to in his reports was the treatment of convicts who were deemed ‘morally insane’, a problem which medical officers in Britain also faced. (7) The difficulty arose in trying to establish if the patients were actually insane, or merely, as one judge noted, displaying signs of ‘insane morality’, which referred to a propensity to commit crime, coupled with a determination to resist being subjected to any laws, which they knew were ‘wrong’. (8) Though now outdated, the concept of ‘moral insanity’ did allude to a (practical, if not necessarily psychological) problem of many of the men who became trapped in a cycle of re-offending. A situation which was made worse by the declining need for convict labour within the colony following the increase of free migrants after 1850.

For many convicts who were unable to find regular work, and felt socially outcast from society, there was little incentive not to drink. As a result, drunkenness became a significant problem which often lead to the men’s confinement in either the prison or the lunatic asylum for being a public nuisance. Although not recognised in England as a legitimate reason to commit individuals to an asylum, a mania for drinking, or dipsomania as it was known, was treated on the grounds of expediency in Swan River. A related social issue was the rise in vagrants, who were also brought into the asylum for want of other institutions to care for them. On their release from the prison several men found themselves in the position of having to beg in order to survive. In a colony that had long held negative views of those they deemed to be burdens, this was an added blow to the convicts who had dreamt of achieving a better life. Once more the resources of the lunatic asylum were stretched beyond its capacity as these convicts, turned vagrants, were forced to seek shelter and food under the pretence of being sick. (9)

Those in the asylum who had genuine mental health issues, often resulting from trauma within the convict system had to deal with the stigma of having been both an inmate of the Fremantle Convict Establishment and the Lunatic Asylum. Despite the surgeon’s best efforts to replace confinement with rehabilitation the lack of space and knowledge on mental health meant seclusion and restraint would remain an unavoidable aspect of the patient’s treatment. By rejecting the convict population, because they were no longer useful, the colonists had inadvertently transformed the asylum into an overcrowded shelter for the socially unacceptable. Not only did this have a negative impact on the men and women who required specialist attention, it also led to a negative cycle of confinement for the convicts who had no other support. Rather than accepting pardoned convicts as valuable members of society, the colonists had instead chosen to denigrate the men they themselves had openly requested. Unwittingly creating a much larger burden in the process, as the convicts they wished to ignore became fully dependent on a system most would never escape.

Kellie Moss is a PhD candidate in the School of History, Politics and IR, University of Leicester.