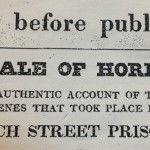 Posted by Clare Anderson in Carceral Archipelago on September 10, 2015

By Kristin O’Brassill-Kulfan. Over the past two years, I’ve been welcomed as an affiliated researcher by the CArchipelago team with the tangible benefit of having learned more about both convict history and global history in this brief span of time than in a lifetime previous. My own work is less internationally defined than the avenues the […]