Before I began The Carceral Archipelago project, my research was loosely centred on the history of Indian Ocean penal settlements and colonies, from the late nineteenth century to the Second World War. I have had the good fortune to work in archives across the region, including in Mauritius, India, the Andamans and Australia, and my transnational approach to tracking convict journeys and connecting colonial spaces together has enabled me to piece together a complex story of multi-directional networks and convict mobility within the British Empire. When I travelled to these places, though the remnants of the sites of my enquiry – administrative headquarters, for instance, or evidence of convict-built structures, roads and bridges – were not an explicit part of my research, I was often intrigued to seek out their physical traces. And when I found them, I came to understand the extent of the historic transformation of these places from and into penal settlements and other sites of confinement, including military barracks, jails, and vagrant depots. Through visiting museums, monuments and commemorative sites, where convict transportation was (or sometimes was not) remembered, I also started to understand the importance of thinking about the representation of histories of coerced mobility and violence, and their relationship to nation making in the post-colonial age.

In a previous Carceral Archipelago blog, project researcher Eureka Henrich gave a fascinating account of her search for Australian convict heritage. Through ethnographic observation, website research and interviews with museum stakeholders, she noted the multiple ways in which the history of penal transportation to the Antipodean penal settlements has been represented, both within museum spaces and through their outward facing online presence. Here, I note in particular the important role that family historians have played in convict history, in transforming the penal settlements into a source of pride, and in representing Australia’s convict founders not as common criminals or even political prisoners, but as builders of the nation. The Australia-based Founders and Survivors project is an extraordinary example of the collaboration of academic historians and genealogists in this respect, especially in the production of resources for a range of user groups. The recent inscription of eleven convict sites onto UNESCO’s world heritage list in 2010 was also an especially important moment in this discursive and representational transformation. In 2010, Prime Minister Kevin Rudd declared that he had two convict ancestors, and The Sydney Morning Herald noted that he appeared proud of his convict ancestry.

In this blog, I offer some reflections on a recent (September 2014) visit to Cape Town, including to the former penal colony, leper colony and site of political exile and incarceration, Robben Island. Like the Australian convict sites, the island is inscribed on UNESCO’s world heritage list, with its historic buildings bearing ‘eloquent witness to its sombre history’ and symbolizing ‘the triumph of the human spirit, of freedom and democracy over oppression.’ My trip to the city and island followed an extensive period of research on the Colonial Office records on the Cape Colony in The National Archives (Kew), which was complemented by project researcher Maureen Rail’s wonderful work on nineteenth-century petitions (amongst other things) in the Western Cape Archives, Cape Town.

The incarceration of Nelson Mandela and other anti-apartheid leaders on Robben Island during the 1960s and 70s is well known, not only for what it revealed of government brutality and repression at the time, but as a key moment in history: after his eventual release, the transition from apartheid to democracy in South Africa. In my work on Robben Island, I was looking an earlier period, at the years following the British takeover of the Cape from the Dutch in the early nineteenth century. If we already know of the importance of South Africa’s international networks in the struggle against apartheid, I wanted to understand how the Cape Colony fitted into what I knew of larger, imperial or pan-imperial global practices relating to imprisonment, banishment and transportation; penal confinement; forced migration; and coerced labour.

I had been invited to Cape Town to participate in the conference Reconsidering Southern African Studies from the Indian Ocean, and as I described in my last blog, I gave the conference keynote lecture at District Six Museum. There, I talked about how in the nineteenth century Robben Island had been a key site through which the Cape was connected to what I called the carceral archipelago of the Indian Ocean world, including through metropolitan London to other Atlantic, Mascarene, Asian and Australian colonies. I spoke of my research into the sending, receiving and on-transportation of convicts (planned and/ or realized) through the Cape and Robben Island, from places as diverse as Bermuda, Mauritius, St Helena and Van Diemen’s Land. I stressed the Cape’s importance as a recipient of “transportation orphans:” children left destitute in Britain by the sending of parents to the Australian penal colonies, and sent into their own form of servility, as servants and farmhands, in the southern hemisphere. The interest that this interpretation aroused amongst those present at my talk implied that my stress on the importance of the colony/ island in these respects was perhaps somewhat different from Southern African studies focused understandings of and stress on their role in scales of colonial governance. 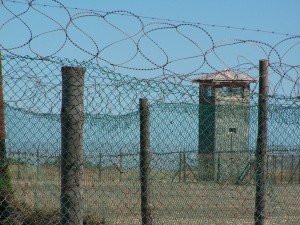 Nonetheless, it felt strange to speak on this theme – in front of a distinguished audience of African scholars, and scholars of Africa – just one day after I arrived on my first ever visit to South Africa. For although as historians we often first experience “place” through our encounters with textual (and sometimes visual or material) archives, it is certainly important to visit the contemporary landscapes, cultures or societies that we wish to understand historically. Especially, perhaps, in writing about forced mobility and confinement, it is necessary to take long journeys, to stand in isolated spots and prison cells, and to visit convict-built structures; in order to appreciate the meaning of distance and physical restriction, and to appreciate the physical efforts of hard labour. While I was in South Africa, it was vital that I had the chance to visit Robben Island; to catch the boat, to see the island landscape, and to walk around some of the remaining material sites of incarceration. And so, having spoken to colleagues and friends about what I conceive of as the choreography of tourist visits to this and similar sites; and having been honoured with a meeting with the CEO of Robben Island Museum, Mr Sibongiseni Mkhize, I bought my ticket, went through the airport-style security check, and embarked for the Island with over one hundred other tourists. Deliberately, I did not take the virtual tour which is available on the Robben Island Museum website, though I have since done so. 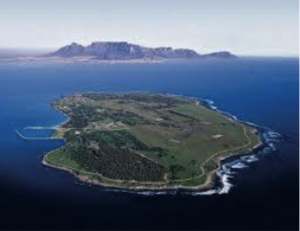 One of the distinct features of visiting Robben Island, compared to other convict sites I know of, is the Museum’s close management of tourists. No doubt this is necessary in order to control visitor numbers, and to minimize degradation of the island’s natural and built environment. Before we got on the boat, we were given paper bracelets to wear, marking us out as ticketholders; kept in a holding room, together; and accompanied in a line through the V&A waterfront and onto the boat by Museum staff. After a 45 minute boat ride, we disembarked, walked to waiting buses, and were taken on a short tour of the island. Like so many places of containment and isolation, the island is really beautiful. From what I saw, the landscape is undulating, and the shores are rocky. Seabirds were nesting; abalone shells lined the beaches; the fields of white calla lilies were in bloom.

Though we were able to see evidence of the island’s nineteenth-century history, notably the prison chapel and leper cemetery, the bulk of the tour was centred on the modern period. We were taken to the quarry where political prisoners cut rock; and from there to the prison. There, ex-political prisoners take tourists through the wings and yards, and into cells. They talk of the history of the prison, and offer anecdotes from their own experience. Our guide told us that after his release, though he had sworn to never set foot on the island again, he visited many times subsequently, even before he started work for the Museum. He said that it had helped him enormously in the process of healing; of coming to terms with what had happened to him, within the context of the newly democratic South Africa. The prison displays are certainly interesting, and visitors are allowed to wander around each prison wing. The cells are sparse, with short quotations from prisoners adorning the walls, side by side with their photographs. In only a few did we see beds or desks. I did not see any graffiti. My tour group moved quietly through the prison; pausing only to look at the texts (many were not English speakers and could not read them) and to take photographs. I noticed a middle-aged Italian couple arguing about whether it was appropriate to take pictures of each other in front of the cells.

Perhaps what struck me most during my visit to Robben Island was its proximity to Cape Town. It is far enough away for the tourist boats to get cancelled in poor weather. And yet it is close enough to render the mainland visible. I wondered how, as convicts and prisoners moved around the island in the nineteenth century, this impacted on their experiences of sentences of banishment or transportation. Did they feel the separation from that which they could see more acutely than if they had been sent far away; or were there more connections between island and mainland than was ideal for such a penal site? Certainly, some colonial officials in the nineteenth-century believed that Robben Island was far from isolated. Governor Benjamin D’Urban wrote in 1837: “Transportation … as is well known – so close to the main land that the Convicts and their Friends and acquaintances constantly hear and sometimes see, each other, and can often communicate, and where, consequently that complete removal of them from all future view, that conveying them to the oblivion of a distant banishment which enquiry cannot follow.” It was in this context that the administration began to think of Robben Island as having a place within larger scales of punishment, with ideas about penal reform drawn from other colonies, and efforts made to effect transportation over longer distances. And this brings me back to the purpose of my visit to Cape Town: to share my research on the many connections that linked the Cape Colony and Robben Island to other imperial sites of confinement – including the distant locations coveted by D’Urban. For it would seem that in the nineteenth century, with respect to sites of isolation, the local and the global were inextricably intertwined.

One response to “Remembering Exile and Transportation: some thoughts from Cape Town”