Posted by Christian De Vito in Carceral Archipelago on May 26, 2015

Addressing convict transportation –the key feature in the Carceral Archipelago project – implies multi-sited research, that is, research in archives located in different places (and countries/continents). Indeed, as convicts were transported from site to site within and beyond the borders of empires and nation-states, they left traces in official records presently held in repositories across the world.

At the simplest level, visiting multiple archives allows to piece together information and sketch a broader and more complete pictures of convict transportation, convict labour and the contexts they were living in. For example, documents held at the Archivo General de Indias (AGI) in Seville, Spain, mainly focus on the upper echelons of the colonial hierarchy, and include the correspondence between the Secretaries of the Indies and the Viceroys in Lima and (from 1776) Buenos Aires. Here we learn about the long-range transportation of prisoners from the Spanish peninsula to the Philippines and the Caribbean, and we gather a little precious information about convicts in specific settlements in Spanish South America, such as Valdivia (Chile), Patagonia (Argentina) and the Falklands/Malvinas. 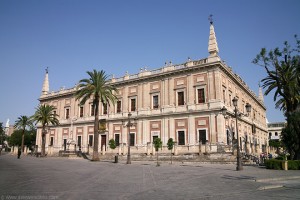 Conversely, in a recent one-month visit to Buenos Aires I studied at the Archivo General de la Nación (AGN) in Buenos Aires, Argentina. Sources there are more focused on the internal dynamics of the viceroyalty of the Río de la Plata: for example, we find the correspondence between the Viceroy, the authorities in Lima and Potosi, and the governor of the presidio in Buenos Aires; and we access the petitions convicts and related individuals addressed to the Viceroy and lower officials. 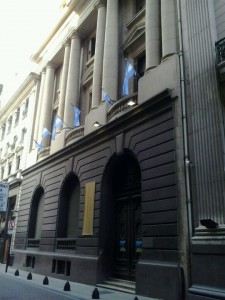 Visiting multiple archives then adds pieces of the puzzle. However, confronting the information gathered in both archives made me aware of the fact that things are more complex (and interesting) than that. For example, why do sources in AGI tell us so little about convict transportation to those settlements in the southern borderlands, while they abound in information on the route to the Caribbean? And why, on the other hand, are the documents in Buenos Aires so informative about those routes within the then Viceroyalty? This uneven presence of sources about convicts in the two archives highlights the agency of the Viceroyalty of the Río de la Plata in designing, settling and managing internal colonisation during the late eighteenth century: indeed, it points to the fact that, in contrast to the Caribbean, metropolitan authorities had very partial control on the actual mechanisms that informed decisions on convict destinations in this region.

Multi-sited information therefore adds information and at the same time allows comparing the quality of the received information. Moreover, no on-line source can substitute the actual experience of being in the places where the history we seek to write took place. In other words, much happens during the hours outside the archive which equally plays a key role in the research process.

During my sojourn in Buenos Aires I became aware of the existence of an extensive academic literature on various aspects of my research – particularly on legal processes in the late colonial period and the nineteenth century process of settlement of Patagonia and other borderlands of Argentina. This high-quality scholarship in Castillan is unavailable on the net and escapes most bibliographies of volume and articles, both in English and Castillan. Even if it does not usually address convict transportation directly, it provides fundamental information of the political, economic, social and cultural context in which it took place. Furthermore, in some cases I had a chance to meet Argentine scholars personally, discussing common aspects of our research and thinking about future research collaboration.

In the weeks of my visit to Buenos Aires, I did not search for the remnants of the convicts’ past in that thirteen-million-inhabitants metropolis. Therefore, I am unable to tell fascinating stories such as the one we can read in previous posts in this blog – Bermuda and Cape Town, Eureka Henrich on Sydney and Katherine Roscoe on Rottnest Island. However, I repeatedly, and somehow irritatingly, bumped into the ubiquitous presence of one issue connected with my research: the Falklands/Malvinas.

Starting from the late 1760s the Spanish Crown built a settlement in Puerto de la Soledad (Eastern Malvinas) in order to protect the trade route of Cape Horn from British penetration in the region. Criminal and military convicts made up the majority of the tiny, yet strategic settlement, being mainly occupied in the building of fortifications and other public works. In present-day Buenos Aires, books about the Falklands/Malvinas are literally in all new and second-hand bookshops. And they are many! Moreover, monuments, temporary exhibitions, graffiti and other signposts of memory can be found in the Argentine capital. In all cases, references are made to the Falklands/Malvinas war of April-June 1982, which opposed the Argentine bloody military dictatorship to Margaret Thatcher’s ultra-conservative British government, causing 904 deaths. Strikingly, this Argentine contemporary revival of the memory of the Falklands/Malvinas war, pushed by the conservative presidency of Cristina Fernández de Kirchner (since December 2007), disconnects that conflict from the dictatorship, and includes it in a story of long-term Argentine “presence” and “sovereignty” on those islands. 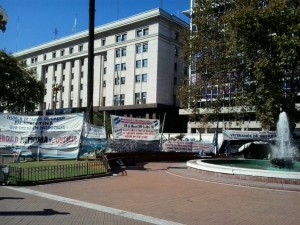 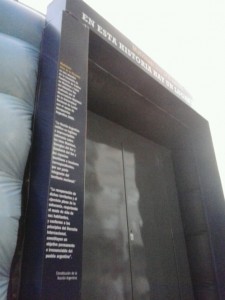 Entrance of the temporary exhibition on the Malvinas, Buenos Aires 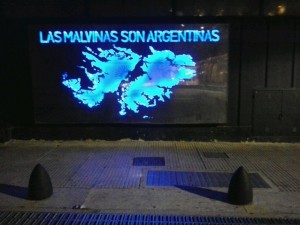 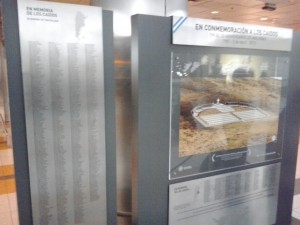 The nationalist discourse in Argentina goes that the Spaniards “came first”, both as explorers in the sixteenth century and as settlers in the eighteenth, and that Argentina’s sovereignty stands in continuity with the Spanish one. This explicit claim of continuity with the colonial period is of course striking. But from the perspective of a social historian two other issues are particularly interesting. First, sources in the archives of both Seville and Buenos Aires reveal the appalling conditions that convicts, soldiers, settlers, and even governors of that settlement had to endure, and how willing they were to desert and leave that colony “at the end of the world”. Indeed, it is for precisely this reason that forced labour was necessary to develop the islands. Second, present-day Argentine discussions on the islands do not recognise their history as a penal settlement or place of forced labour. It is interesting to consider why that might be the case. It might be to do with the ‘disappearance’ of convicts within the coercive labour flows that underpinned the Spanish Empire. Or perhaps it is a symptom of a more general historiographical refusal to incorporate convict labour into global histories of imperial expansion.

Interestingly, appalling living conditions and coerced labour – especially as impressed military labour – were common features in the British settlements in the Falklands/Malvinas in the late 1760s and in the 1830s-1850s too…