My initial research on peculiar history of Zanzibar’s so-called Prison Island as part of the Carceral Archipelago project began last year delving into the records in the National Archives and the British Library. Relying on Foreign Office correspondence, I was able to piece together some of the original documents of the construction of prison buildings in the 1890s on Changuu Island. It lies some three miles to the west of Unguja, the larger of the two islands in the Zanzibar archipelago, facing Zanzibar town. I recently travelled to Zanzibar to investigate further in the records of the Zanzibar National Archives and also visit the island to survey its contemporary use as a destination for tourist daytrippers. 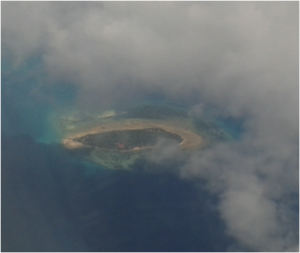 Figure 1: View of Changuu Island from the air

During the nineteenth century, the prison was located in the eighteenth century fort on the seafront in Zanzibar Town. In 1884, Sir John Kirk, H.M. Agent and Consul General, witnessed visited the prison and was horrified by the squalid and inhumane conditions in the fort prison. The prison housed local prisoners, many of whom were incarcerated for transporting slaves, outlawed since in the abolition of the slave trade in Zanzibar in 1873.[1]

The visit of Consul C. S. Smith in 1891 showed that little had changed since Kirk’s experience – he too encountered prisoners crammed into small, unventilated and fetid spaces, the ‘hot, heavy, foul air’ nearly made him vomit.[2] As Zanzibar had become a British Protectorate in 1890, the need to remedy the situation was now more urgent for the British officers.

Progress was slow, in spite of the support from the Foreign Office, the Sultan and his First Minister, the domineering General Sir Lloyd Mathews. The cornerstones were formally laid in July 1893 and gradually the prison complex took shape. Although completed by the mid-1890s, the buildings were left unoccupied and no prisoners were moved there. In fact, Europeans residing in Zanzibar regularly used the island as a health resort where they would spend time convalescing from illness or escaping the town, attracted by the fresh sea air.

Throughout the 1890s, the Zanzibar administration had planned to use the island as a site for quarantining boats infected with disease. The outbreak of plague in India in 1898 and the massive transportation of Indian indentured labourers to work on the Uganda railway created concern across the East African colonies, who called for a regional quarantine station.[3] In spite of lengthy protestations from Mathews and others in Zanzibar, Prison Island became the central quarantine station for the whole of East Africa. The prison blocks were repurposed for use by passengers while the labourers were segregated and inhabited in small buildings along the seashore. 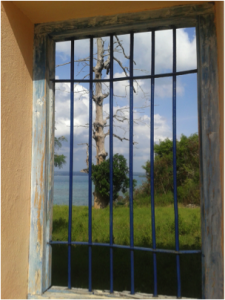 Figure 2: Looking out of the intended prison block courtyard

The need for a permanent quarantine station died down in the 1910s, although the island retained this function. Its main use, however, was still as a resort – the Europeans in Zanzibar regularly rented the bungalows or spent afternoons there picnicking. 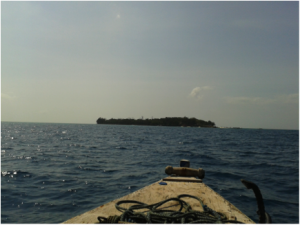 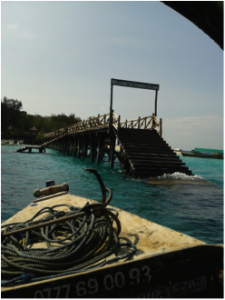 Figures 3 and 4: Approaching and arriving at the island

Today, it takes about twenty minutes on a motorboat to reach the island where visitors disembark on a jetty above the sandy beach facing Zanzibar town. The island has been landscaped with brick pathways winding around about half of the island, while a private hotel takes up the other half, fenced off from daytrippers.[4] As the seashore around Zanzibar town is not appropriate for sunbathing, many tourists take up the opportunity to spend a day on the island. There is also the added attraction of the giant tortoises, reportedly the gift from the Government of the Seychelles in the late 1910s. One of the buildings has been converted into the Mathews Restaurant – recalling the First Minister who was integral in the building project, although this is currently closed. The Prison Restaurant is currently open for visitors, with tables arranged on a patio in front of the intended prison block. 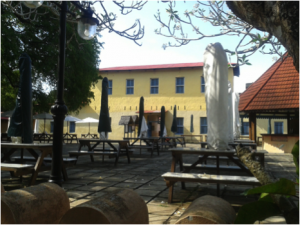 Figure 5: Prison restaurant in front of the intended prison block 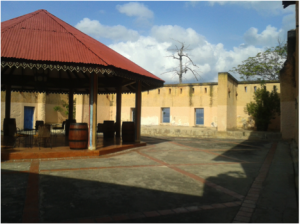 Throughout the site are display panels explaining the history of the island with reproductions of archival documents. Although rather faded now, it is clear that a great deal of time and expense was at one time devoted to providing this in-depth historical information for the visitor and interpreting the complex history of the island.

While officially named Changuu, the island is still known widely as Prison Island around the town – an enduring historical misnomer. Never officially used as a prison, the island did become a space for forced isolation during the quarantine period. However, its most consistent use has been and remains that of voluntary isolation – seeking an escape from the intensity of Zanzibar town. 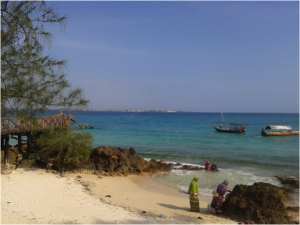 Dr Sarah Longair works at the British Museum and her research explores British colonial history in East Africa and the Indian Ocean world through material and visual culture. She has published several book chapters, articles and edited volumes, including Curating Empire: Museums and the British Imperial Experience (2012), co-edited with John McAleer. Her monograph, Cracks in the Dome: Fractured Histories of Empire in the Zanzibar Museum, 1897–1964, will be released in 2015.

[3] For the history of quarantine in Zanzibar, see: Amina Ameir Issa, ‘“From Stinkibar to Zanzibar”: Disease, Medicine and Public Health in Colonial Urban Zanzibar, 1870-1963’ (University of KwaZulu-Natal, 2009).