Posted by Emma Battell Lowman in Carceral Archipelago on October 6, 2014 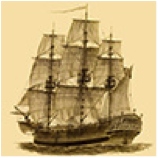 During a recent research trip to the State Library of Western Australia I had the opportunity to examine the journal compiled by William Smith, Surgeon Superintendent, on board the Merchantman’s second voyage to the Swan River Colony. [1] Leaving Portland on July 1st 1864, 257 convicted men were transported directly to Fremantle in a voyage that lasted 73 days. [2] As one of only forty-three convict voyages to the colony, Dr Smith’s journal highlights the level of authority awarded to the Surgeon Superintendents, providing insight into the developing techniques used to coerce and control convicts during this period.

Early reports of convict voyages frequently described the damp, unhealthy conditions in which the criminals were confined as ‘shocking’.[3] High mortality rates were a common feature as diseases, often left unchecked and untreated swept through the overcrowded decks. In an attempt to overcome these difficulties the Transport Commissioners in 1815 announced their intention to appoint Surgeon Superintendents to oversee each voyage. As a result, hygiene and medical treatments dramatically improved reducing the number of deaths at sea. Following this success the responsibilities of the Surgeon Superintendents increased to cover many aspects of convict life.

Once aboard the Merchantman, convicts were expected to follow a strict daily regime. Rising at dawn the men were given one hour to ensure their bedding was aired, cleaned and stored away, whilst each mess took their turn in bathing. Two divisions would then be selected to wash and return any utensils before everyone was admitted on deck to clean the ship throughout. Religious instructors were an important component of the routine, attending to the prisoner’s education and spiritual wellbeing twice daily. Whilst fears surrounding resistance ensured efforts to occupy the convicts remained a priority, it was also an attempt to prepare them for their arrival in the colony. A record compiled by religious instructor Charles Coopes, acknowledges the literacy levels of those onboard, emphasising the growing pressure to modify the convicts in preparation for their future. Having arrived in Fremantle Coopes reported 247 of the convicts as being literate, with just 10 remaining unable to either ‘read or write’.

As techniques designed to reform replaced previous preoccupations with physical punishments, Surgeon Superintendents turned to regularised discipline to preserve order. Although standard forms of punishment, including the use of leg irons and the lash, remained at the disposal of those in command, the convicts received few physical reprimands. Despite the shift in societal responses towards the treatment of convicts, Surgeons Superintendents remained quick to assert their authority when dealing with defiant individuals. The 36 lashes and removal of William Thompson, accused and found guilty of committing an unnatural offence, prior to the Merchantman’s departure is confirmation that these methods, although in decline, remained a significant threat to the convicts. Incentives however, were quickly recognised as an important alternative in encouraging positive behavioural changes. As a result, strategies initially intended to reform were soon accepted because of their ability to aid in the management of convicts. Unlike British prisons, where inmates were denied any influence over their treatment, the advertisement of rules on convict ships encouraged the men to regain a degree of control. If the prisoners conducted themselves commendably they were allowed all the privileges that could be granted. However, as Surgeon Superintendent on board the Sultana warned, if ‘order’ could not be preserved the convicts would be confined to their messes and ‘chained to each other when on deck’. [4] Recognising the detrimental effects associated with physical and mental abuse, Surgeon Superintendents used a combination of instructions, responsibilities and discipline to ensure the men were prepared, rather than damaged for public service.

A closer examination of the Merchantman’s final rule ‘to record the names of all defaulters for the purpose of being reported to the Governor’ further demonstrates the level of power attributed to the Surgeon Superintendents. Whilst some of the convicts may have been prepared to forego privileges during their voyage to Western Australia, few would have been willing to jeopardize their future prosperity so easily. Evidence of this manipulation is provided by the list of 35 prisoners recommended to the Governor for exemplary conduct. Investigation into these commendations displays the wide variety of opportunities available to the convicts, as the men were mainly recognised for the roles in which they had been employed on board.

Those who received an endorsement could expect to be treated with leniency, whilst prospects for the men who failed to adopt the expected behaviour were far more uncertain. The importance awarded to these recommendations can be examined in the differing fortunes of two convicts, Charles Kemble and Patrick Cahill. Kemble’s name appears regularly in Dr Smith’s journal after he took a key role in the cutting of the ship’s deck to ‘effect escape’. In comparison, Cahill was one of the few to receive a recommendation to the Governor of Western Australia for performing his duty as a cook. Although Cahill was sentenced for life in 1862, he was awarded a ticket of leave just two years after his arrival into the colony. This was in great contrast to Kemble, who, also convicted in 1862 and sentenced to 15 years, fared far worse having to wait eight years for the same opportunity.

Whilst the system of transporting convicts to Western Australia varied only slightly from previous efforts to Tasmania and New South Wales, the introduction of Surgeon Superintendents unquestionably led to rapid improvements. Initially a culmination of government intervention and reforming initiatives, the system evolved to incorporate the concerns regarding convict welfare and control. The ability to maintain discipline was vital to the transformation, providing a unique environment for the rehabilitation of those on board.

After graduating in Modern History at De Montfort University in 2012 and completing an MA in history at the University of Leicester, Kellie Moss was awarded a Graduate Teaching Position with the School of History in 2013. Her research centres on the global integrations of convicts in Western Australia between the years 1850-1868, addressing the circulation and utilization of convicts from within the British Empire. Kellie is also currently an affiliated researcher on the ERC Carceral Archipelago project (2013-2018) coordinated by Prof. Clare Anderson.