What and When is Death? By Floris Tomasini

Posted by Emma Battell Lowman in The Power of the Criminal Corpse on November 9, 2015

In this blog post I’d like to talk about two forms of death, biological and social death, through the conceptual lens of personal identity. This deceptively simple distinction informs a lot of my subsequent conceptual analysis about the harm and redemption of death and dying. It also lays one of the foundation stones for […] 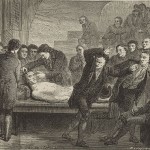 Post-Mortem Punishment: A Fate Worse than Death? By Rachel Bennett

Posted by Rachel Bennett in The Power of the Criminal Corpse on September 14, 2015

A key question I have repeatedly asked myself in the researching and writing up of my PhD thesis, and one that permeates the Criminal Corpse project, asks why punish the dead? The 1752 Murder Act placed the post-mortem punishment of the corpse at the centre of the criminal justice system in Britain as it stipulated […]