Posted by Jonathan Nichols in Leicester to Jupiter: The Juno Mission on June 30, 2016

Unfortunately, they don’t let you take observing trips to the Hubble Space Telescope; perhaps the only downside to using the veteran observatory.  It is a strange feeling, knowing that this world-renowned and famously oversubscribed facility, perhaps best known for its remarkable images of nebulae and galaxies, is, for a fleeting moment in history, doing what I have requested.  On the one hand it is obviously a huge privilege, extremely exciting and a source of professional pride.   On the other, although I have spent a considerable length of time over the past year developing computer simulations of what I expect to see at any given time, and having engaged in lengthy to- and fro- conversations with our telescope program coordinator in Baltimore to define the precise coordinates in the sky where I’d like to point the observatory, there is a nagging feeling that somehow, somewhere I must have forgotten to carry the 1 and I’m going to point the world’s most precious astronomical facility at the Sun.  Fortunately, that fear has so far proven to be merely healthy paranoia, and indeed there are many checks to make sure that such a calamity will not happen.  Thanks to all the careful planning, we’ve hit our target bang on, and we have captured some spectacular observations of Jupiter’s auroras. But still.  It’s nerve-wracking. 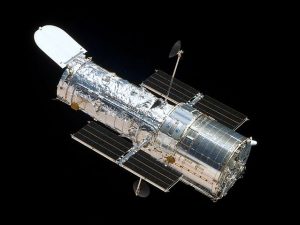 The fantastic thing about observing Jupiter’s auroral emissions is that every single time we look, something different is going on.  Sure, there are patterns and some features are like old friends but, like snowflakes, the images display remarkable variety within an overall framework of distinct features.   It is always exciting to download brand new, pristine data and discover what is happening this time, and knowing that only you and perhaps a handful of other scientists worldwide have ever seen the data at which you are currently marvelling.  In this case, we have had the privilege of capturing some spectacularly active emissions, and some of the most powerful ever observed.  In one case the total power released by the auroral emissions was equivalent to 6,000 nuclear power stations.  Remarkable!  It is as if Jupiter is throwing a fireworks party in anticipation of Juno’s arrival!  Our job now, over the coming weeks and months, is to painstakingly compare the auroral observations with Juno’s measurements of the solar wind as it approached Jupiter.   This is a unique moment in which we are able to do perform this test, as we’ve never had such a great set of solar wind observations near Jupiter while we are observing with HST, and of course Hubble will not be around for the next mission to Jupiter.  The hope is that we will be able to determine whether the solar wind, which is known to drive Earth’s auroras and play a large role in driving Saturn’s, also controls to some degree Jupiter’s auroras and magnetosphere. This is presently unknown, and is a gaping hole in our understanding of the solar system’s largest natural particle accelerator.  The fact that we’ve seen such great auroras during the program bodes well for our investigation.

An example of an image of Jupiter’s auroras obtained by the author using Hubble Space Telescope. This particular image was captured on 17 May 2016 using the Space Telescope Imaging Spectrograph.

So why do this?  Apart from being intrinsically interesting, understanding how planetary magnetospheres respond to ‘space weather’ has become important for our civilization, which is increasingly reliant on satellite technology that is is exposed to such processes in space, and each planetary magnetosphere provides a different part of the overall story.   Jupiter in particular also provides an important accessible analogue for more distant astrophysical objects such as pulsars (Jupiter exhibits weak but genuine pulsar behaviour) and exoplanets, such that increasing our knowledge of how Jupiter’s magnetosphere works has a positive impact on our wider understanding of the cosmos.

So, downloading the data is perhaps one of the most exciting parts of the process, but it is just the start of a thrilling scientific journey of discovery.