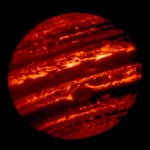 In just a few days time, on July 11th 2017, NASA’s Juno spacecraft will perform the closest-ever views of the swirling maelstrom known as Jupiter’s Great Red Spot. It was always hoped that the pre-planned polar orbit and close perijove passes would take the spacecraft over the storm, but the slow and somewhat unpredictable westward […]