Posted by Physics & Astronomy in Leicester to Jupiter: The Juno Mission on May 11, 2018

Members of NASA’s Juno mission team, some of the world’s leading observers of Jupiter, and citizen scientists from across the globe are attending a workshop ‘New Views of Jupiter: Pro-Am Collaborations during and beyond the NASA Juno Mission’ at the Royal Astronomical Society in London on 10-11 May. JunoCam images presented at the meeting by […]

The University of Leicester has a long history of involvement in cutting edge space and planetary research spanning more than five decades – a Leicester-built instrument has been operating in space every single year since 1967, and Leicester scientists and engineers have played vital roles in missions with many different space agencies, including NASA, […] 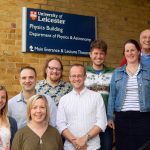 No matter where you look in the fields of astronomy and planetary science, humankind’s exploration of our Solar System’s largest planet has been a centrepiece for new discoveries and new insights into our place in the universe. What shaped the architecture of our Solar System, allowing the formation of rocky terrestrial worlds close to […]