The spacecraft that came before Juno

Posted by Henrik Melin in Leicester to Jupiter: The Juno Mission on September 12, 2016

The Juno spacecraft is not the first to visit Jupiter – this honour goes to the Pioneer 10 spacecraft back in December of 1973. The planet has been visited by a total of eight spacecraft prior to the arrival of Juno in July of 2016. Out of these eight, only the Galileo spacecraft entered orbit, […] 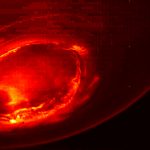 Posted by Henrik Melin in Leicester to Jupiter: The Juno Mission on September 5, 2016

Wow! The Juno spacecraft did not disappoint! The images released after Juno’s first science perijove are absolutely stunning. The one that grabbed me was this one:   Jupiter’s southern infrared aurora as observed by Juno JIRAM (NASA/JPL-Caltech/SwRI/ASI/INAF/JIRAM)   It is the first image released from the Jovian Infrared Auroral Mapper (JIRAM), an instrument contributed by the […]