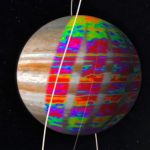 Water, water, everywhere.     Dr. Leigh Fletcher appeared on this month’s episode of BBC Sky at Night to discuss Juno’s goals at Jupiter, and describes the importance of Jupiter’s water in this new post.   If our ideas about the formation of giant planets stand up to the observational tests of the Juno […] 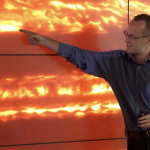 Posted by Physics & Astronomy in Leicester to Jupiter: The Juno Mission on July 6, 2016

In addition to the suite of remote sensing instruments carried aboard the Junospacecraft, the mission coincides with an unprecedented international campaign to scrutinise Jupiter’s dynamic, evolving atmosphere from Earth-based facilities. Juno carries a microwave radiometer capable of sounding below Jupiter’s top-most cloud decks to hundreds of bars of pressure to understand the deep processes underpinning […]