When Juno successfully entered orbit around Jupiter on 4th July 2016, it was placed an orbit that took 53.5 Earth days to complete. During the 3rd orbit, which was scheduled to begin on 19th October 2016, a burn of the main engine was intended to move Juno into a 14 day science orbit. This new orbit […] 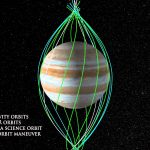 Posted by Physics & Astronomy in Leicester to Jupiter: The Juno Mission on June 17, 2016

As the Independence Day fireworks erupt over the Rosebowl Stadium near Los Angeles, just across the highway from NASA’s Jet Propulsion Laboratory, fireworks of a very different kind should be going off at Jupiter. For 35 minutes, NASA’s Juno spacecraft will fire its main engine to apply the brakes and ease into orbit around […]