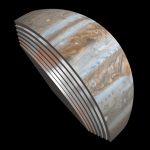 Posted by Physics & Astronomy in Leicester to Jupiter: The Juno Mission on November 29, 2016

Back in July, there was much fanfare surrounding the successful arrival of the Juno spacecraft at Jupiter.  A near-perfect engine firing had placed the solar-powered spacecraft into just the right orbit, with the promise of great things to come.  Juno’s science goals are fourfold:  explore the origins, interior structure, atmosphere and magnetosphere of this […]

When Juno successfully entered orbit around Jupiter on 4th July 2016, it was placed an orbit that took 53.5 Earth days to complete. During the 3rd orbit, which was scheduled to begin on 19th October 2016, a burn of the main engine was intended to move Juno into a 14 day science orbit. This new orbit […]