During Juno’s time at Jupiter, we will have the fantastic opportunity to study the most powerful aurora in the solar system. An aurora is light emitted by atoms and molecules that have been excited through collisions with very energetic particles that enter a planet’s atmosphere along the planet’s magnetic field lines. The generation of Jupiter’s aurora is vastly different to the processes that create the Earth’s aurora and by studying this, we can gain a better understanding of space weather and how the planets interact with it. 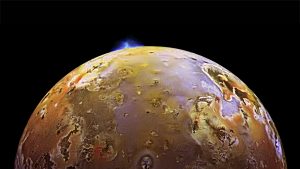 Imagine you’ve made a line of people and asked them all to hold hands and you stand on the spot and spin them around you. Maybe you’re mean and try to spin them really fast and you’ll notice that the person on the end of the chain has to run the fastest to keep up. At some point they can’t run fast enough and eventually they break the chain. This is essentially what happens at Jupiter to create the aurora, but instead of people there is plasma, and instead of arms there are magnetic fields. 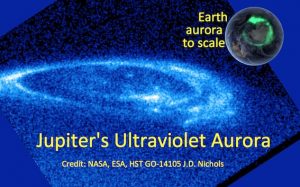 The generation of the main auroral emission is thought to be very well understood, but it behaves strangely when the pressure of the solar wind increases. When the solar wind pressure ramps up, Jupiter’s main auroral emission has been observed to brighten, which is opposite to the expected behaviour calculated in models. If Juno is lucky enough to be at Jupiter during increased solar wind pressure, we will be able to collect measurements from inside the magnetosphere and pin-point the processes behind this strange behaviour.

Not only does Jupiter have main auroral emission, there are also the footprint auroras from the Galilean moons. Through the direct connection of magnetic field lines to the moons, Io, Europa, Ganymede and Castillo, spots and arcs are created in Jupiter’s aurora. The footprint aurora are crucial in creating models of Jupiter’s magnetic field and alongside the measurements taken with Juno, we will be able to create amazingly accurate models of the magnetic field to understand the whole system more completely.

The final component of Jupiter’s magnetic field is the most controversial. Poleward of the main auroral emission is the polar aurora which is highly variable – scientists observe arcs, spots and patches. Exactly how this aurora is generated is not fully understood. Some researchers believe that the processes that occur here may be similar to the interaction between the Earth’s magnetosphere and the solar wind. Others believe that the magnetosphere of Jupiter is completely closed to the solar wind. Already we have tantalising evidence that Jupiter is connected to the solar wind but exactly how, we do not know. And again this is where Juno’s data will be the key in discovering the answers to one of the most pressing questions in space physics.

We can apply what we learn about Jupiter’s magnetosphere to the Earth’s magnetosphere. Although the magnetosphere’s of Jupiter and Earth are different, studying other planets provides a natural laboratory in which the conditions of the experiment change at each planet. Understanding magnetosphere’s is not only important for the satellites and astronauts that orbit the Earth, but will be crucial for future space exploration and the potential industrialisation or colonisation of Jupiter’s moons.

5 responses to “Jupiter’s aurora: the most powerful Northern lights display in the solar system!”