Like many New Zealanders, I grew up hearing stories about the Australian penal colonies, particularly anecdotes of London pickpockets and similarly desperate, impoverished characters, and the harsh and sometimes unfair regimes of punishment and deprivation under which such convicts lived and laboured. These tales often took on mythic proportions. Little did we know that our homeland was instrumental in transporting people from New Zealand across the Tasman Sea into captivity throughout much of the 1840s until 1853 when transportation to Van Diemen’s Land ceased.

On a research trip to New Zealand in 2013, I was astonished to discover at Archives New Zealand in Wellington a large, leather-bound ‘Register of indents for convicts transported to Van Diemen’s Land, 25 Nov 1847-22 Feb 1853’. This weighty tome contained a series of letters from Lieutenant-Governor Edward John Eyre to his Vandemonian counterpart with lists detailing convicts’ names, ages, marital status, trade or profession, offences, where and when tried, sentences, physical descriptions and remarks. These indents transferred the custody and, importantly, the labour of prisoners convicted in New Zealand to the penal colony of Van Diemen’s Land. From my earlier research, I knew some Māori had been transported to Van Diemen’s Land.[1] I was intrigued to find that this practice had been far more widespread.

On delving into the convict records in Hobart, Tasmania, it became apparent that the transportation of prisoners from New Zealand did not commence in 1847, the year in which the register began: it dated back to an earlier period. The first person in the colony sentenced to transportation, William Phelps Pickering, appeared before the Court of General Quarter Sessions in Auckland in October 1841, the year after the Treaty of Waitangi was signed between the British and more than 500 Māori, and just a few months after New Zealand ceased to be administered from New South Wales. His sentencing sparked a dilemma. 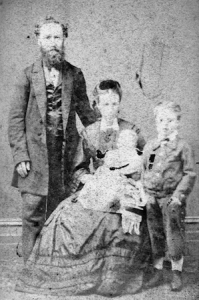 At the time, there was no legal instrument directing to whence Pickering ought to be sent. This was resolved on 4 November 1841 when New Zealand’s inaugural governor, William Hobson, exercised the prerogative of his office to ‘appoint that any Offender convicted in the said Colony [New Zealand], and being under sentence or order of transportation, shall be transported by the first convenient opportunity to the Colony of Van Diemen’s Land’. [2] Accordingly, Pickering was eventually shipped to Van Diemen’s Land in 1843 along with 12 other prisoners who had, by then, likewise been sentenced to transportation.

Throughout the decade in which New Zealand was shipping convicts across the Tasman Sea, at least 110 people underwent this journey. The vast majority of them – 93 of the 110 prisoners, or 85 per cent – were young single men from a working-class background. Some were men without means. Most of those transported, whose average age was a little over 28, were convicted of thefts and assaults or, in the case of the military, desertion. This cohort was ethnically diverse and included six Māori warriors, one Sandwich Islander (Hawaiian) and a man from Cartagena, Spain, who was brought up in North America and was described as having copper-coloured skin, black woolly hair and whiskers, a broad visage and hazel eyes. [3] Amongst those transported were 51 currently serving or discharged British soldiers, some of whom had run away from Māori in fear, deserting their regiments during armed altercations. The rest – including one female – were civilians. Amongst these were emancipated convicts who fled the Australian penal colonies to seek refuge, anonymity and a fresh start in New Zealand but instead ended up being transported again.

In reading the trial records of those transported, and other contextual information, it became obvious that rather than transportation being imposed as a punishment by British mandate or external forces, there was an impetus from within New Zealand to cleanse and purify the nascent colony. For example, by 1842, Wellingtonians were noticing an upsurge in ‘the frequency of petty thefts in the streets of Wellington’. A key strategy in curbing crime was to round up alleged offenders, many of whom were viewed as vagrants, and put them on trial. It was hoped that ‘the trials before the court, together with the punishment awarded in each case, will … if not put a stop to, at least check the frequency of such proceedings’.[4]

Transportation to Van Diemen’s Land was intended as a deterrent to others. For example, Māori men who resisted the colonial advance were handed down exemplary punishments – several were hanged and others were exiled to demonstrate the British Empire’s strength and reach. Transportation had the added advantage that many of those sent to a penal colony were unlikely, at least legally, to be able to return to New Zealand. There were of course some exceptions. White-collar criminal Pickering is an obvious example: he returned to New Zealand where he accrued businesses as well as urban residential and rural properties. His post-sentence success demonstrates how the convict stain did not necessarily attach itself to men from middle-class backgrounds.

One striking statistic is that only one woman, Margaret Reardon, was transported from New Zealand. This can be explained through the ways in which women’s and men’s actions were viewed and criminalised differently in colonial society. As Megan Simpson has observed, ‘women were indicted for fewer serious crimes than men’ in the early years of the colony. She has pointed out how only seven female defendants were brought before the Supreme Court in the 1840s, following ‘a trend that can be observed in other jurisdictions in the British Empire’. The Supreme Court heard cases of a more serious nature such as murder, fraud and so on, while ‘cases which were more generally associated with female defendants, such as small theft, prostitution and drunkenness, were heard by the Resident Magistrate’s Court’. [5] These types of crime were far less likely to result in a sentence to transportation from New Zealand.

Despite the cessation of convict transportation to Van Diemen’s Land in 1853, New Zealand judges continued to sentence prisoners to transportation until 1854. Justice Sidney Stephen sentenced five men to transportation in March 1853, including Ngāti Apa rangatira Panapa (Barnaby) Huru te Rangi, who was found guilty of robbing Mr W.H. Constable as well as stealing from Captain Daniell’s station at Rangitikei. When Panapa petitioned Governor George Grey to be allowed to remain in New Zealand the governor conceded to his request, yet Grey did not tell Panapa that convict transportation to Van Diemen’s Land had ended and, moreover, that the British had in any case banned any more Māori from being sent there.[6]

Another Māori prisoner, Taraiwaru, died in custody in New Zealand in 1855 while under sentence to transportation. He was found guilty of murdering William Smally or Smalley, a man ‘who so mysteriously disappeared while trading with the natives on the Thames’. Tellingly, Taraiwaru was described as ‘a strong hale man when taken into custody a few months ago’. The Maori Messenger: Te Karere Maori went on to explain how ‘a sense of his crimes, added to the loneliness of his situation, so affected him as to engender disease, and thus prematurely has he been ushered into the presence of the Great Judge’.[7] Unfortunately the death of indigenous people in custody was a phenomenon across Britain’s nineteenth-century empire wherever the rule of law was imposed by colonists.[8]

After the British Parliament passed legislation (16 & 17 Vic, c. 99) on 4 August 1853 that ended transportation from Britain for periods less than 14 years, New Zealand’s parliament formed a select committee to consider how best to replace transportation as a punishment for criminals convicted locally. Before this select committee could report its findings, a bill to replace transportation with penal servitude was introduced into the New Zealand Parliament. On 16 September 1854, Parliament passed ‘An Act to abolish the Punishment of Transportation, and to substitute Penal Servitude within the Colony in lieu thereof’. Its first clause, which read ‘On and after the first day of January, one thousand eight hundred and fifty-five, no person shall be sentenced to transportation’, officially ended more than a decade of convict transportation from New Zealand to Van Diemen’s Land.[9] New Zealand colonists were poised to experiment with new ways of curbing crime and reforming people as part of their agenda to build an ideal society. 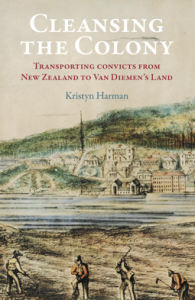 Dr Kristyn Harman is a Senior Lecturer in History in the School of the Humanities at the University of Tasmania who specialises in cross-cultural encounters across Britain’s nineteenth-century colonies, and twentieth-century Australasia. Her thematic interests cohere around socio-cultural frontiers, including: transportation to, and within, the British Empire’s penal colonies; frontier warfare; Indigenous incarceration; colonial domesticity; and the Australian and New Zealand home fronts during World War Two.

Author of Cleansing the Colony: Transporting Convicts from New Zealand to Van Diemen’s Land (2017) and winner of the 2014 Australian Historical Association Kay Daniels award for her first book Aboriginal Convicts, Kristyn’s work is represented in top tier journals including the Journal of Colonialism and Colonial History, and the Journal of Imperial and Commonwealth History.