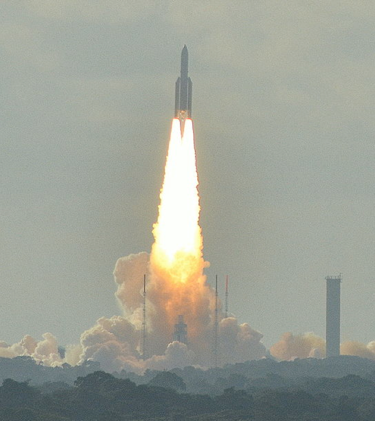 On April 18, 2008, Vietnamese journalist Danh Đức was standing in the rain at the Kourou Space Center, the European Space Agency’s spaceport in French Guiana, a territory that is, as an overseas département, still an integral part of France.[1]  Eyes heavenward, Danh Đức was eager to witness the launch of Vinasat-1, the first Vietnamese satellite. Vietnam’s Post and Telecommunications Ministry had previously rented space on other countries’ satellites, but Vinasat-1, an indication of the Socialist Republic of Vietnam’s growing economic strength, would not only save government money, but put “Vietnam in a more central role on the world stage.”[2] The economic restructuring polices of the Socialist Republic of Vietnam in the late 1980s changed the landscape of the Vietnamese economy from a centrally planned to a market economy and had turned Vietnam into one of Asia’s fastest growing economies.[3]

With the launch positioned as “a memorable landmark in the country’s development and integration [into the world community],”[4] Danh Đức had been sent to Kourou to write a firsthand account for Youth newspaper, a Hồ Chí Minh City-based paper with the largest circulation in Vietnam.  Given the dearth of interaction between French Guiana and the Socialist Republic of Vietnam, and their radically different trajectories in terms of French colonialism, a Vietnamese journalist appearing in French Guiana was an unusual occurrence in itself.

In his later description of this momentous day, Danh Đức narrated: “as I was standing in pouring rain watching the Ariane-5 rocket propelling the satellite into skies, I suddenly heard someone call out to me in French: “Are you Vietnamese?” Danh Đức turned to see an elderly security guard looking at him.  He described the guard “as having slightly dark skin but eyes sharp with joy. At that point the guard said to me in Vietnamese: ‘I’m Vietnamese too!  My name is Trần Văn Cân.” Danh Đức’s chance encounter with Trần Văn Cân was revelatory.  Initially unable to fathom how a Vietnamese man came to be working as a guard in the Kourou Space Center, Danh Đức remembered from cursory historical reading that during the colonial period political exiles were deported to French Guiana after an uprising in 1930. He assumed Trần Văn Cân was descended from one of those exiles.  However, when Danh Đức questioned him, Trần Văn Cân related that actually his father had been born in French Guiana in 1922 after his grandfather had been exiled there at the end of the 19th century.  He was the third generation of Vietnamese men all bearing the same name: Trần Văn Cân. Danh Đức had no idea that Vietnamese deportation to French Guiana pre-dated 1930.  In fact, Vietnamese prisoners being deported to different areas of the French empire dated from 1863 from lasted until 1941. Nearly ten thousand prisoners (both common law and political) were exiled to twelve different locales throughout the French empire.  Some were indeed political prisoners but the vast majority had committed common law crimes.  However, Danh Đức made no distinction in reclaiming these Vietnamese political prisoners.

As a result of this revelation, Danh Đức went on a tour of French Guiana to meet other descendants of Vietnamese prisoners.    He also visited Cirque Anguille, an area of French Guiana now referred to as the “Penal Colony of the Vietnamese” throughout the territory.   There Danh Đức lit incense for the ghosts of the dead convicts and claimed that the “heady smell of fragrant incense drove away the cold of the jungle which had been forgotten for nearly a century.” He also mentioned that he was keen to placate the spirits of the Vietnamese prisoners.  He presumed they were now “hungry ghosts” susceptible to the pain of, “a wandering fate,” (số phận lưu lạc).   Danh Đức’s reference to the prisoners being forgotten for nearly a century has a certain historical accuracy. These exiles have been completely omitted in texts published in Vietnam, except for one brief historical survey published in 1957.[5]

Exile in the Making of Vietnamese History

How did the history of the deportees from Vietnam become so neglected?  One reason is that unlike colonial prisons in Vietnam, the penal colony was not connected to the Indochinese Communist Party and its successor, the Vietnamese Communist Party.  The largest shipment of political prisoners to French Guiana was connected to the Vietnamese Nationalist Party a potential rival to the Indochinese Communist Party.[6]   After the closure of the penal colonies, prisoners could chose repatriation or to remain in the newly formed French dependency.  Many who had married locally chose to remain.   In the 1950s and 1960s, a perception existed that given the opportunity to return to Vietnam from these overseas locales, patriots would do so; those who did not, were subsequently viewed with suspicion. The last convoy of Vietnamese prisoners left French Guiana in 1963.

However, in the last few years, as Vietnam has become more economically powerful, interest in these diasporas has grown.  From prisoners of patriotism, to overseas entrepreneurial magnets, the polyvalent nature of exile is put to different uses, but often to show the ingenuity of how Vietnamese interacted with the globe in the past.   The complexity that characterized transportation, making it a fraught and unpredictable experience over temporal, spatial, and racial lines, does not appear. Instead, much of the current efforts to recapture and respect exilic contributions to global Vietnamese identity are collapsed into essentialized concepts of unequivocal Vietnamese heroism that, miraculously, endure over time.

On his return to Hồ Chí Minh City, Danh Đức held a meeting in the offices of the Youth newspaper for the “Descendants of Patriotic Prisoners of Guiana” which had been announced through the newspaper and on their internet website.  Approximately sixty people who were interested in the topic or were actually descendants of deportees attended. Various lecturers commented on the importance of these Vietnamese exiles, who were pioneers in a more global era of Vietnamese influence and experience: “We are coming together as those who love our country in exile everywhere; this also means that our blood has been pouring down in so many strange lands.”

After this meeting, Danh Đức chose not to write a book about the launch of the satellite Vinasat-1. Instead he edited a collection of essays about the Vietnamese in Guiana, [The Vietnamese Prison in Guiana].  Part travelogue and interviews, as well as short historical articles by various professors, Danh Đức recounted meeting Trần Văn Cân and other descendants, as well as traveling to sites connected to the Vietnamese around French Guiana. In the foreword to the book he suggested that without the satellite launch, these Vietnamese in French Guiana might have remained forgotten, implicitly linking Vietnam’s emergent economic status with this reclaimed history.

In his contribution to the volume, historian and professor, Đinh Xuân Lâm, professor at the National University of Hanoi, concentrated on a comparison between the prison conditions in Guiana and those imposed by the Americans during the Vietnam War, mentioning how important he felt “it was for the newspaper to explain the history of what should be a shared yet personal emotion.” Danh Đức paraphrased the comments of other participants of this meeting, taking excerpts from their written comments.  One participant wrote:  “The French who invaded our country, exploited our resources, also sought to destroy the bravest, most elite of our nation, by pushing them to the most remote and dangerous areas of the world.  There they continued to exploit their labor force until they were exhausted and tried to destroy them both mentally and physically.” Another participant was quoted as stating: “We understand more fully and deeply the stages of the heroic struggle for the independence of the nation, our forefathers, the sacrifices, the great losses in the patriotic movement of our ancestors which textbooks did not address fully when teaching.”

In such descriptions the deportees are “designated as the most brilliant and intelligent people that the French had to deport and work to the bone to destroy.”  For one reader, the stories emerging from book show: “[t]he idea of inspiring patriotism which is practical and meaningful, not just pages full of dry facts”—an implicit criticism of state-sponsored patriotism.  The descriptions of where the prisoners were sent are lyrically written. They conjure deportation and exile sites as peripheries to Vietnam’s new core, one person noting that it was “the islands in the middle of thousands of seas, this is there the French chose to place in captivity the most resilient and brave people.” One reader wrote in to the newspaper to list some of the geographical locales— not just Guiana but also Madagascar and Tahiti, even Algeria. The reader’s account then says that “the footprints of the Vietnamese revolutionaries are in strange lands, their blood and bones are located there.  The Vietnamese today have a right and a need to know about them.”

Such a vision of what being Vietnamese is, is notable as a departure from past eras in which such efforts were always inscribed within carefully controlled government-constructed nationalism. The center of which is the Vietnamese Communist Party.   In both the media surrounding the launch of Danh Đức’s book and its aftermath, the satellite serves as a metaphor; it is the opposite of containment, and instead symbolizes a newly powerful Vietnam celebrating longstanding and even neglected accomplishments as portents of more to come.  Instead of Vietnamese prisoners being forcibly shipped to French Guiana and contained there, Vietnamese satellites dominate the Guianan sky. Not merely the new horizons of nationalism, nor simply the demise of a more controlling Vietnamese state, it represents a reassertion of Vietnamese identity worldwide, and a claiming of that potential for contemporary audiences.

[1] Only five territories are still officially départements et territoires d’outre-mer [overseas departments of metroplitian France]. The other four are Reunion Island, Martinique, Guadeloupe, and Mayotte. All of the territories use the Euro and are considered part of France.

[3]There is an extensive literature on these economic changes. For example, Socioeconomic Renovation in Viet Nam: The Origin, Evolution and Impact of đổi mới ed. Peter Boothroyd and Pham Xuan Nam, Singapore: Institute of Southeast Asian Studies, 2000.

Danh Đức’s text is titled Nhà Lao Annam ở Guyane, [The Vietnamese Prison in Guiana] T.P.Hồ Chí Mịnh: Nhà Bản Trẻ, 2008, Xuât. All the passages were translated by the author.    Some responses to the text come from the reader response websites of Tuoi Tre newspaper.

Dr Lorraine M. Paterson has done extensive research on penal flows from French Indochina to other parts of the French empire. She is a Research Associate on the Carceral Archipelago Project. Her contact e-mail is: lp283@leicester.ac.uk