The small sandstone island of Cockatoo Island in Sydney Harbour is best known as a convict stockade which held the ‘worst’ of the convict system: former-Norfolk Islanders and bushrangers are its most famous inhabitants. However, from the 1850s onwards Cockatoo Island acted primarily as a local prison for those convicted in the colony of New South Wales. This included a relatively large cohort of Chinese prisoners, reflecting the changing demographics of colonial society in the mid-nineteenth century.

Between 1853 and 1869, at least 37 prisoners on Cockatoo Island were listed as ‘Chinese’ or ‘Chinamen’ in Cockatoo Island’s registers, though it is possible they came from other parts of South-East Asia.[1] Of the third who had a ‘place of origin’ listed all, bar one, came from Amoy (Xiamen). As one of the five treaty ports forcibly opened to trade by the Treaty of Nanjing in 1842, Amoy was a harbour of Chinese emigration. After the discovery of gold deposits in New South Wales in late-1840s, the gold-rush attracted waves of Chinese emigrants, whose passages were paid upfront by brokers to be paid off by digging (a form of indentured ‘coolie’ labour). Most of these emigrants came from the province of Fuijian (where Amoy is located) and Guandong. After taxes on entry of Chinese immigrants were introduced in Victoria (1855) and South Australia (1857), Sydney became the main port of entry for those seeking to make their fortunes in goldfields across Australia, resulting in more than 20,000 Chinese people arriving in New South Wales between 1858 and 1860. [2] 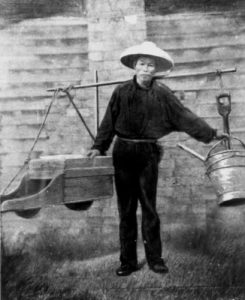 R. Daintree, ‘Chinese gold digger, with his mining tools suspended from a yoke across his shoulders, starting for work in the 1860s’, John Oxley Library, image no. 60526.

Many of the Chinese prisoners on Cockatoo Island were convicted of crimes while working on the goldfields in New South Wales. A typical case was the six Chinese prisoners who arrived on Cockatoo Island in May 1858, after being found guilt at the Maitland Quarter Sessions of ‘violent robbery’ on the goldfields of Bingarra.[3] Their names were Devan, Dick, Tommy, Tain, May and Harry. The prosecution asserted that the prisoners had held a Chinese digger named Tom at knifepoint and robbed him of all his possessions. The defence argued, based on testimony by a digger named Shang Hoe, that Tom had forfeited his possessions during a game of ‘Chinese cards’. On the basis of two Chinese witnesses’ testimony (relayed through an interpreter), the all-white jury returned a guilty verdict without retiring to discuss. All six of the accused who shared a tent were found guilty, because Tom’s possessions were spread across their berths in their cramped  living quarters. This case demonstrates that Chinese men on the goldfields lived and socialised together, with easy access to money, alcohol and cards. As a result, it was common for groups of Chinese diggers to be convicted and arrive on Cockatoo Island together, where they would continue to live as part of a tight-knit community. These convicts’ tickets-of-leave tended also specify regions with enclaves of Chinese diggers, like Ipswich or Goulburn, as places they could be released to. 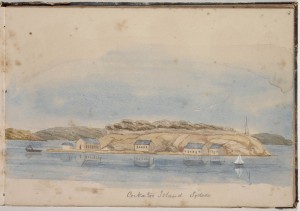 Once incarcerated on Cockatoo Island there is evidence that Chinese prisoners worked and socialised together.  Chinese prisoners were likely to be chosen to work as convict servants, and share certain benefits as a result. In June 1865, for example, four out of sixteen servants were Chinese.[4] It is possible that racial stereotypes were at play about Chinese people as subservient, though, in reality they resisted the labour regimes they found themselves in. For example, a 35-year old prisoner named ‘Loy’ spent a full month out of his first two on the island in solitary confinement as punishment for refusing to work; he was eventually committed to the lunatic asylum at Parramatta in March 1860.[5]

Another convict named Tan refused to work as a way of protesting the validity of his sentence. Tan would  regularly throw down his tools and demand an interpreter. When the interpreter arrived, Tan  asserted his innocence and claimed that his former master owed him money. These protests usually coincided with times when other Chinese prisoners were leaving the island, having completed their sentences. As the chief warder, Mr. Brown, testified to a board of inquiry in 1857:

“I remember Tan refusing to work…when other Chinamen where leaving the island, with whom he wished to go. He asked for an interpreter, and he went to work. On the third occasion he declined to work, because he was not allowed to go with four other Chinamen who had been sent on the island with him”[6]

This suggests that Tan both felt kinship with other Chinese people on the island, but also struggled with language skills needed to make a formal written ‘petition’ to the governor. It seems that then that many Chinese prisoners experienced their lives leading up to conviction, while imprisoned and after release as part of segregated Chinese communities but that their ethnicity also caused them to be ill-served by the colonial justice system at large.

[2] A. Curthoys, ‘ “Men of All Nations, except Chinamen”: Europeans and Chinese on the Goldfields of New South Wales’, Gold: Forgotten Histories and Lost Objects of Australia, ed. by I. McCalman, A. Cook and A. Reeves (pp. 104-106.

[4]  ‘A Return of Prisoners on Cockatoo Island employed as servants by the Civil Officers on the [island]’, Goether Kerr Mann to Under-Secretary, 1 August 1865, Cockatoo Island, CSIL, 65/3574.