Posted by Christian De Vito in Carceral Archipelago on March 2, 2015

In her last blog (https://staffblogs.le.ac.uk/carchipelago/2015/02/05/the-politics-of-comparison-writing-a-global-history-of-punishment/), Clare Anderson points to the challenges the Carceral Archipelago Project faces in writing the history of punishment as global history. Indeed, addressing the singularity of each site and connection of convict transportation and proposing broader interpretations is a complex task, which requires a high degree of self-reflexivity regarding our methodological approach.

One of the priorities is finding methodologies that suit our double focus on comparisons and connections: on the one hand we want to compare aspects and patterns of convict transportations within and across polities, and across time; on the other, we fully acknowledge the multiple and diverse connections that existed among those sites, created by penal transportation and by the circulation of other people, ideas, commodities, practices and technologies. The need to maintain this double focus makes us unsatisfied with traditional comparative methodologies, which tend to compare predefined patterns across pre-defined spatial units (usually overlapping with political and administrative territories). The history of convict transportation requires other types of comparisons, in order to foreground the high level of spatial mobility, the greater porosity of borders, and the intensive degree of inter-connectedness that characterise this historical phenomenon.

In this blog I seek to point to the potentials of seven methodologies that, in different ways, bring together comparisons and connections. For each, I include a visualisation of the core concept (regarding exclusively my own subproject on convict transportation in the Spanish empire), note the key publications where the methodology is explained in detail, provide a brief description how the methodology works, and give one example of application to contents related to the Carceral Archipelago Project.

This is the first part of the blog, including information on four methodologies. 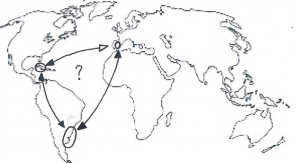 This methodology was first proposed in Kenneth Pomeranz’ The Great Divergence: China, Europe, and the Making of the Modern World Economy (Princeton, 2000). Its most complete description can be found in: Gareth Austin, “Reciprocal Comparison and African History: Tackling Conceptual Eurocentrism in the Study of Africa’s Economic Past”, African Studies Review, 50 (3), 2007, pp. 1-28.

In reciprocal comparisons “both sides of the comparison are viewed as ‘deviations’ when seen through the expectations of the other, rather than leaving one as always the norm” (Austin, 2007: 3). This approach foregrounds two aspects: first, it allows for interpretations by asking common questions in distinct contexts; second, it avoids Eurocentrism (indeed, any kind of ethnocentrism) by asking questions that do not stem from one of the two contexts that are being compared, but are related to both. For example, in addressing the issue of the “making of the modern world economy” both in Europe and China, by using the reciprocal comparison approach, Pomeranz avoided considering the European path as the standard against which the Chinese economic development should be measured.

Reciprocal comparisons have been made so far mainly between macro-regions, as in the cases of Europe and China. This creates the risk of flattening significant internal differences within each unit of comparison. Moreover, scholars using this approach tend to be less interested in connections, and run the risk of picturing the regions they compare as isolated one from another and from other territories. However, both Pomeranz and Austin have highlighted the need for reciprocal comparisons “at a more disaggregated level of geography” (Austin, 2007: 10), and Austin has mentioned the example of Dylan Penningroth’s The Claims of Kinfolk (2003), where the reciprocal comparison of slavery and abolition in Fantes (Gold Coast) and the African Americans in the U.S. South entails the study of the social ties of the (former) slaves on both side of the Atlantic.

This more connected and spatially disaggregated variant of reciprocal comparisons seems especially promising for the research we do in the Carceral Archipelago Project. For example, we may ask ourselves which factors shaped the relationships between the colonists and the native populations by comparing reciprocally the penal settlements in Hokkaido and Sakhalin, or the penal colonies in Western Australia and the Spanish American presidios (military outposts), and addressing the connections produced by the circulation of knowledge and the politics of comparison established by the historical actors, as I discuss below. 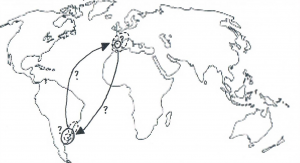 Michael Werner and Bénédicte Zimmermann’s article, “Beyond Comparison: Histoire croisée and the Challenge of Reflexivity”, History and Theory, 45 (February 2006), pp. 30-50 is the most detailed presentation of this approach.

Histoire croisée was especially designed to overcome the fracture between comparisons and transfers through pragmatic and reflexive induction. As such, it is an important tool for making scholars aware of the constructed nature of the categories, spatial units and periodizations we work with. Regarding comparisons, this approach warns us that we need to pay attention to the way we choose the scale and object of comparison, our conceptualisation of the interaction among the objects of the comparisons, and our own position as external observers of the phenomena we are comparing. Regarding transfers, the histoire croisée approach alerts us to the need to avoid reification of the categories of analysis we use, and the spatial units we seek to connect.

As I see it, the sophisticated yet rather abstract character of this approach makes it especially suitable for those phases when a research project is (re-)designed according to the insights received from new secondary literature and archival sources. In this sense, in the Carceral Archipelago Project it may help us to make strategic choices regarding the localities/regions and the connections we wish to address, the sources we use and the questions we ask of them, and the categories we use to describe certain phenomena vis-à-vis those that were used by the historical actors. 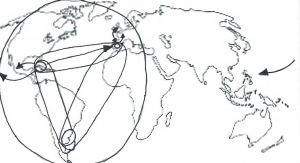 Sanjay Subrahmanyam has made the clearest argument in favour of this approach in his article “Connected Histories: Notes towards a Reconfiguration of Early Modern Eurasia”, Modern Asian Studies, 31 (3, Jul 1997), Special Issue: The Eurasian Context of the Early Modern History of Mainland South East Asia, 1400-1800, pp. 735-762.

With connected histories, the key idea is that scholars should not compare different areas of the world as if they were separate one from another. Rather, we should study the connected, yet distinct nature of these regions, and address both the problems of “translation” this poses, and the strategies created by the historical actors to overcome them. Different from the reciprocal comparisons approach, which pays special attention to structural patterns, the focus here lies especially in the cultural implications of cross-cultural connections. The result is not simply a juxtaposition of fixed identities, but the formation of fluid and shifting identities from the interaction and active re-elaboration of multiple cultural perspectives. This “ethnographic” approach proposed by Subrahmanyam leads itself particularly well to studying the cultural impacts of convict transportation both within single polities, e.g. the experiences and imagination of convicts transported from India to the Andaman Islands or from Cadiz to Havana, and in a cross-imperial perspective, as in the case of the British POWs forced to work as convicts in the Spanish dominions.

At another level, the connected histories approach suggests that major historical concepts and cultural phenomena usually seen as stemming uniquely from the history of Western Europe, such as the Renaissance, the Enlightenment and “the Modern”, were produced through innumerable local and regional interactions between individuals, groups and ideas that originated in many and various parts of the world (and not always including Europe). Regarding the Carceral Archipelago Project, it is especially tempting to ask how the multi-sited practices of, and the cross-imperial ideas on, penal transportation shaped the concepts of “colonization” and “modernity”. 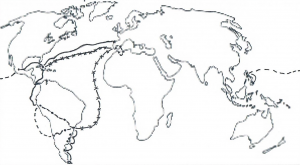 Originally developed in ethnography, geography, sociology of migration and archaeology, the concept of “translocality” has been introduced in historical studies by Ulrike Freitag and Achim von Oppen (Translocality. The Study of Globalising Processes from a Southern Perspective. Brill, 2010, esp. their insightful introduction).

In general terms, as a methodological approach translocality points to the need to locate historical phenomena in specific places. Thus, for example, it invites us to study the circulation of ideas regarding penal transportation not as an abstract relationship between, say, France and Russia, but as an historical process involving specific universities, clubs or laboratories within both countries and beyond, characterised by diverse types of connections and favoured by multiple vectors (individuals, journals, books, etc.). At the same time, translocality insists on the constructed nature of places and regions, and consequently invites us to think carefully about the spatial units we address and assume. Moreover, it points to the need to overcome the divide between “places of origin” and “places of destination” by also attending to other relevant localities. In the case of the Carceral Archipelago Project for example, it promotes our understanding of both the singularity and the connectedness of each place involved in, and produced by, convict transportation. Finally, translocality implies the possibility of addressing both material and symbolic connections. It highlights, therefore, the need to look closely at the materiality of transportation (the sea- and land-routes that were concretely walked; the trade ships that were actually used; the multiple interests that existed around it; etc.) and at the way the historical actors constructed, perceived, imagined carceral spaces.

(to be continued next week…)

2 responses to “Comparisons and Connections (part 1)”