Unveiling Women’s History at the University of Leicester

Posted by Sarah Wood in Library Special Collections on January 3, 2019

About the University of Leicester

Established in 1921 as a memorial to those who served in the First World War, Leicester, Leicestershire and Rutland College had humble origins. Higher education was provided for 15 students during the first year, in one building, and with a small number of subjects offered. In our first decade, women made up the majority of students. In the first academic year, three out of eight members of staff mentioned in the 1921-22 Annual Report were women.

Across the decades, significant achievements have been made in many areas of research and teaching, where female academics have demonstrated their commitment, passion and expertise in their subject. Watershed moments within the University’s history such as our first female professor (1973), or the first black woman President of the Student’s Union (1975), all reflect moments of significant cultural change within the University.

The role of Archives & Special Collections

The last year has seen a drive within the Archives & Special Collections team to research, identify and celebrate the contributions and achievements of women in the University of Leicester’s history. Activities have included: graduate internships, exhibitions, drop-ins events, blog posts, oral history interviews and new content for the website. These activities have not only promoted new findings about our history, but also encouraged new areas of interest amongst staff, students and alumni.

As part of the University’s Accelerate Your Career Graduate Programme a two week work placement based in Archives & Special Collections was offered to graduates. This placement enabled a graduate to gain skills in document handling, preservation and collections care, and conducting archival research. Part of the placement activities included the identification and collation of key individuals in the University’s history. Statistics such as the appointment of female staff and key events, were compiled through using the University Archives (specifically the Annual Reports and Bulletins). The placement highlighted new names that were previously unknown. For example, founder of the School of German Mariette Soman (in 1933) and the first female lecturer in Botany Dr Miles Thomas (appointed 1923).

This was important preparatory work with helped support our development of an event for International Women’s Day later in the term. You can learn more about the placement here: https://staffblogs.le.ac.uk/specialcollections/2018/01/19/graduate-placement/ Building on the work of the graduate placement, for the University’s celebration of International Women’s Day 2018 Archives & Special Collections hosted an open drop-in event over lunch time, which encouraged staff and students to explore our collections through a curated display on the involvement of women in the University’s history. Three themes were explored as part of the event: philanthropic women involved in the foundation of the College, the student experience during the 1950s – 1970s and ‘female firsts’. 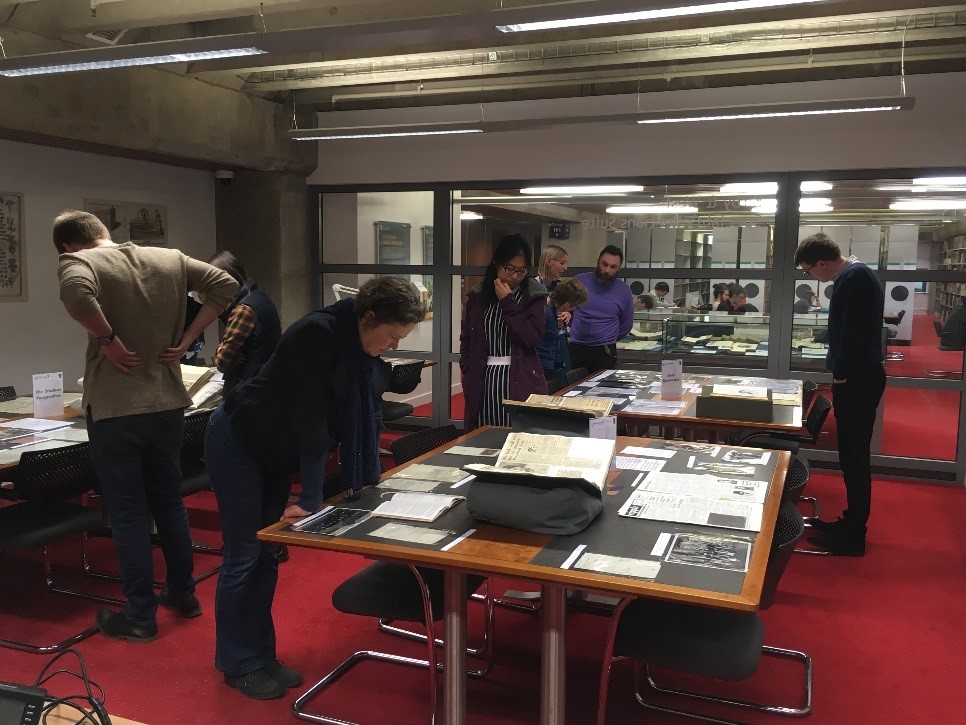 Attendees at the drop-in event for International Women’s Day 2018.

The University History project has been encouraging a collaborative rediscovery of the institution’s past, as well as critical engagement with the University’s archives. Women (and minorities) are underrepresented in the known history of our institution and also in the archive holdings. As a result, the project has been keen to capture oral and written histories relating to women’s experiences of living, working and studying at the University of Leicester. A showcase of material relating to women is being compiled, and active outreach to women for submissions of archive material is ongoing. Written biographies and publication lists for the first female staff at the University, including Miss Charlotte Elizabeth Cowper Measham (Botany), Dr Ethel Nancy Miles-Thomas (Botany), and Dr Mariette Soman (French and German).

The project has also been following up on the lives of our first female students to tell their stories, too, including that of Miss Nellie Bonsor, who was the first president of any Students’ Union at the University, from 1923-26. The project is also supporting initiatives to increase the recognition of women’s contributions at the University, such as renaming study rooms and adding interpretation to buildings that are named after female figures from our history. In summer 2018, the project recorded an oral history interview with Jean Humphries, the widow of our first Chair of English, Arthur Humphries, who came to Leicester in 1947. Over time, the project aims to explore women’s experiences through the post-war years and up to the present. Throughout the year, blog posts written by members of the team have explored the foundation story of the University of Leicester and, in particular, the role of philanthropic women in helping to establish an institute of higher education. Read about early supporter Miss Florence Rich, our First Students and the role of the Belmont House Society in the founding of the College.

Our Archives & Special Collections exhibition for the summer term focused on showcasing the discoveries made by the team over the past year, as well as highlighting the new research undertaken into women’s involvement in the University’s history.

Using four display cases, the exhibition themes highlighted the important achievements women had made in overcoming stereotypes, social boundaries and growing opposition. Archival material from both the University Archives and donations from alumni enabled their stories to be brought to life.

Visitors to the exhibition were encouraged to:

The display was complimented by an online exhibition that ensured the continuation of the project.

The research undertaken and events organised by the Archives & Special Collections team has played a significant role in raising awareness of women within the University’s history across campus. One example of its impact can be found in the University Library, which will have a new study room named after the University’s first Librarian, Rhoda Bennett. Thanks to the research conducted over the past year this will be accompanied by information panels telling Miss Bennett’s story.

Over the forthcoming year the team will continue to conduct archival research, strive to challenge preconceptions of women’s role within the University, and reveal new stories and experiences.

This post was written by Sarah Wood and Elizabeth Blood (Research Associate: University History Project). It is part of a series of posts on the theme of Women’s History to tie in with History Day 2018.