Who owned the Wicked Bible?

Posted by Simon Dixon in Library Special Collections on October 23, 2015

It’s been reported in the news this week that a copy of the so called “Wicked Bible” is to be auctioned at Bonhams in November. This edition of the King James Version was printed in 1631 and then hastily withdrawn after a printing error was discovered in the Ten Commandments. A crucial word was omitted from Exodus XX.14 so that it read ‘Thou shalt commit adultery’ rather than ‘Thou shalt not’.

SCS 03550: “Wicked Bible” Exodus XX.14. One of the most notorious misprints in history.

When the error was discovered, the printers Robert Barker and Martin Lucas were fined and all copies were recalled and most were destroyed. For many years it was believed that the mistake was a simple printing error, but more recently academics such as our own Prof Gordon Campbell have suggested that it was an act of sabotage perpetrated by Barker’s rival, Bonham Norton, in order to embarrass Barker. If this was the intention it was certainly successful, as Barker spent much of the rest of his life in the King’s Bench Prison.

There are 10 copies of the edition known to exist in research libraries around the world. The English Short Title Catalogue lists just four copies in the UK, including one held in Special Collections here at Leicester. Given the rarity and notoriety of the volume, it’s interesting to find that our copy bears some evidence of use and ownership across the centuries. It came to the University as part of the Robjohns bequest, mentioned in an earlier blog post. I’m no expert when it comes to dating binding, but the leather binding with (now worn) gold tooling appears to be roughly contemporary with the volume. 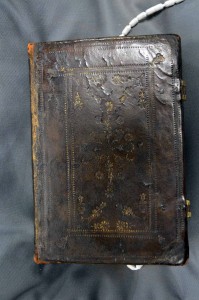 SCS 03550: The Robjohns copy of the “Wicked Bible”, with gold tooling on leather. 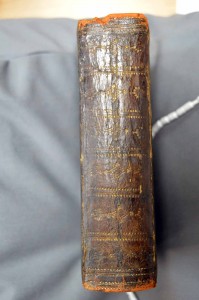 A pencil note on the front pastedown reads ‘A very valuable edition B. Halliday’, indicating that Robjohns bought the book, as he did many others, from Bernard Halliday. Halliday was a Leicester second-hand bookseller who had shops in Silver Street and then Highcross Street in the early decades of the 20th century. The Bible is bound with The Booke of Common Prayer (London: Robert Barker, 1631), The Genealogies Recorded in the Sacred Scriptures . . . by J. S. (1631) and the The Whole Book of Psalmes: Collected into English meeter by Thomas Sternhold, John Hopkins, and others (London, 1631). 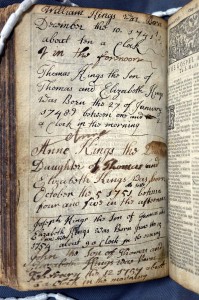 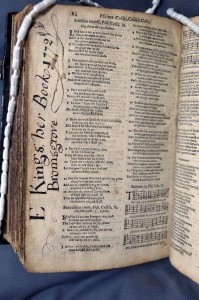 For several decades during the mid-eighteenth century the book was in the possession of the Kings family of Bromsgrove, Worcestershire. Evidence for this is provided by the recording of the births of a number of children of Thomas and Elizabeth Kings between 1741 and 1759 on the reverse of the New Testament title page and elsewhere in the volume. Towards the end of the Book of Psalms can be found the inscription ‘E Kings Bromsgrove her book 1772’.Based on the FamilySearch database < https://familysearch.org/ark:/61903/1:1:NPPL-1Y8> the Kings family were members of the Upper Meeting (Independent) in Bromsgrove. It appears, therefore, that the Robjohns copy of the ‘Wicked Bible’ was used as a family Bible by a nonconformist family from Worcestershire from at least c. 1741-1772. This raises the interesting question of whether they knew the history of the volume in their possession, and the fact that it should have been destroyed during the previous century. Where the Bible had been for 110 years before the birth of William Kings at 10 in the afternoon on 10 December 1741 will probably never be known, although I would be delighted to hear from anyone with information about the Kings family from Bromsgrove. It would also be interesting to know whether the other surviving copies bear any evidence of ownership and use that might contribute to a broader picture of how a dozen or so Wicked Bibles have managed to survive, nearly 400 years after they should have been destroyed.