Posted by Colin Hyde in Library Special Collections on May 1, 2019

A few years ago, when I was working at the East Midlands Oral History Archive, I planned an oral history project that would record people’s memories of the immediate post-war years in Leicester. During preliminary work for the project, I discovered a collection of high quality, large, mounted black and white photos of Leicester taken in 1945 by Harold White for the British Council and kept at the Record Office for Leicestershire, Leicester & Rutland (ROLLR). There are around 170 photographs stored in wooden boxes and they offer a fascinating glimpse of the City at the end of the war. I decided I would like to digitise these photos and use them in the project. Now, thanks to funding from the National Lottery Heritage Fund, and the expertise of the ROLLR staff, this has happened. 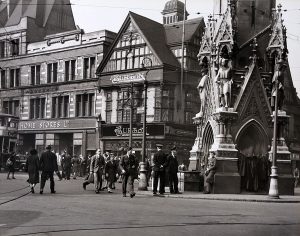 For further information about the collection I contacted Stephen Witkowski, the Information Governance Advisor (Archives and Disclosure), at the British Council. He was able not only to send me more details about the collection, but also to put me in touch with Harold White’s great grandson, who had contacted the British Council asking for information about his great grandfather’s work.

The British Council’s report of 1945/46 described the situation at the end of World War Two:  there was a huge demand from across Europe and beyond for information about Britain. The British Council found itself distributing libraries of records and sheet music to schools in the Middle East and responding to requests from Czechoslovakia for English Church music, and from Italy, Hungary and Cairo for madrigals. 314,870 prints and 172,485 plastic stereos were issued to illustrate Overseas Press articles and features, while the Council’s dark-room produced over 220,000 prints for Press and exhibition use during the year. Duplicates of 7,000 pictures were sent to Council offices in Ankara, Brussels and Rome, while existing libraries at Lagos, Buenos Aires and Cairo were supplied with an additional 4,000 pictures to bring them up to date. 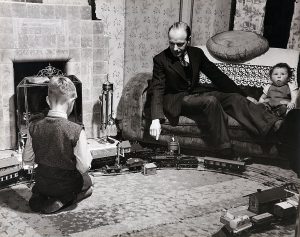 The photographer chosen for Leicester was Harold White, who had already worked for the British Council when he visited the village of Lacock in 1944 to take photographs for a pamphlet about English village life. The pamphlet and photos became very well-known and White had a celebrated career as a photographer, scholar, collector, and restorer.

White’s skill was evident in the composition and technical quality of the Leicester photographs. The main subjects covered were education, leisure and sport, civic administration, health provision, industry, the police, domestic life, transport, utilities, and a few pictures covering shops and housing. The one obvious omission was photos of poor quality housing and families living in poverty, but this may not have been an image Leicester City Council or the British Council were keen to project.

While some of the photos were labelled, the level of information about the photos varies. Saying that a picture of a pub interior is ‘A city public house’ is of limited use (see below) and over 70 years later it is very difficult to identify some of the people and places featured in the images. If a more detailed list existed it doesn’t appear to have survived. The ROLLR’s cataloguing team have made a valiant effort but many of the locations remain unknown. 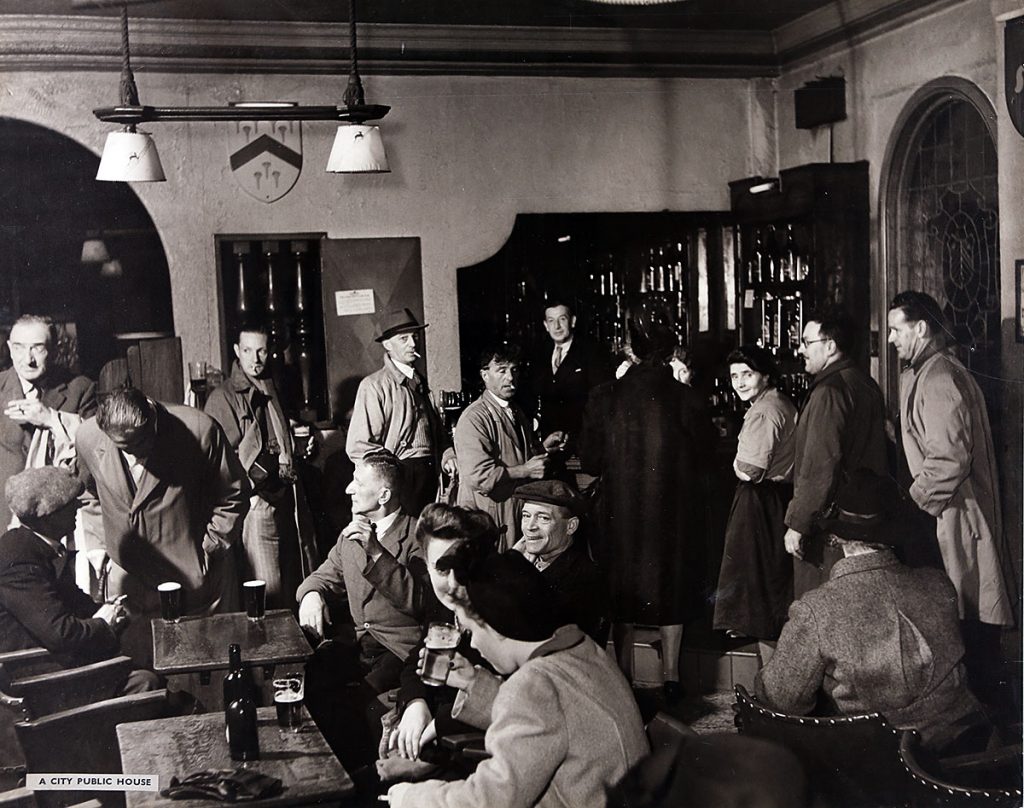 A City public house in 1945 (click on photo to enlarge)

Having said this, I made a breakthrough when I managed to identify a man who appears in several of the photos. He was Mr SJ Peshall, who was chairman of the Chamber of Commerce in 1945 and a director of the huge hosiery firm, Corah. This immediately gives a clue as to the location of the many shots of hosiery workers, board meetings, and trade union meetings. It seems likely that Mr Peshall gave help and advice to Harold White, and he was photographed by White at his home at Quorn Grange.

Obviously, these are not the only photos of Leicester taken in 1945, but they are special. It is not often that a celebrated photographer has been charged with the task of documenting life in Leicester, and the fact that these high quality photographs have survived and are available all these years later makes them a fascinating resource. Some of the photos can be seen on the Post-War Leicester website (see below), but many more are waiting to be added. The ROLLR has all the prints and they can be viewed by appointment.

Harold White and the Talbots – https://talbot.bodleian.ox.ac.uk/2016/05/20/harold-white-photographer-scholar-collector-restorer/

Colin Hyde is currently managing the Sounds for the Future project, which is based in Special Collections. He has run the East Midlands Oral History Archive for many years.