Posted by Sarah Wood in Library Special Collections on April 25, 2019

Working in the archives, I often roll my eyes at newspaper headlines which report on archive material being ‘newly discovered’, suddenly ‘unearthed’, and ‘never before seen’ – as quite often the document has been sitting in the archive store for years, has a catalogue entry and is quite familiar to staff who work there.

I am therefore going to have to eat some humble pie as I write about a research enquiry received this term.

It began on a cold day in January…

In January we were contacted by a member of the public asking for our advice on dating a page from Sue Townsend’s manuscript, bought at auction nearly 16 years ago. The manuscript in question was page one of the draft manuscript of The Secret Diary of Adrian Mole Aged 13 ¾, bought at a RNIB

charity auction in November 2003. This takes the form of a diary entry, dated 1st January 1980. Alongside the diary entry was a letter from Sue 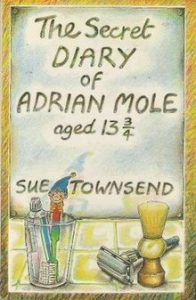 Townsend authenticating the page as the original.

The University Library holds the complete draft manuscript of the novel which also has a 1st January diary entry. This was placed on long term loan with the Library along with the archives of Sue Townsend in 2005. The two diary entries differ slightly, and after spotting a photograph of our 1st January page on the Library’s website, the member of the public asked:

‘Does my [first page] predate the one in your archive?’

A simple question, one might think. However, I was soon to discover that there would be a far from simple answer.

How do you define a first draft?

Whilst we can be reasonably certain that the Library holds the complete first draft of the novel, earlier ideas of its inception, written during its development phase, do appear in the archive.

One such document is dated April 1978, but this takes the form of rough notes rather than a complete draft manuscript.

N.B. It is worth mentioning at this point the motivation behind The Secret Diary’s creation. In an interview with BBC Radio 5 live Sue Townsend recalled the moment she was challenged by her eldest son who asked:

‘Why can’t we go to safari parks like other families do?’

Sue regarded this as the first ‘mini criticism’ of the family and from this moment ‘heard Adrian’s voice’, prompting her to write the first three months of The Secret Diary. The story was later adapted for radio to form a 30 minute radio play, titled ‘The Diary of Nigel Molesworth’. After a successful seven episodes, Sue was encouraged to develop this into a novel, changing the name of the protagonist and lowering the age from 14 to 13.

A frequent challenge which arises when cataloguing literary collections is trying to date manuscripts, or establish the order in which early drafts were written. Sometimes authors will date their pages or title them (e.g. draft1, version1, insert 1a) which makes things easier for archivists at the cataloguing stage. The difficulty comes when rough drafts are written simultaneously, with the imaginative flow of the author spilling over several notebooks, and plot lines varying from minute to minute.

These rough notes, records of the author’s ideas, are difficult to date and classify. Do they count as ‘early drafts’ or are they simply the ‘jottings’ that form part of the composition stage of the writing process? This is another blogpost in itself, and I would be interested in hearing the views from any creative writers out there.

Back to the mystery

Musings aside, the mystery still remains. If both 1st January diary entries were believed to be taken from the first draft manuscript of Adrian Mole, then how did the University Library end up with another 1st January page when the ‘original’ page was auctioned off in November 2003?

As you can see below, the two diary entries are very similar, with the difference in content quite subtle (for example, the third New Year’s resolution). Due to light exposure over the years both diary entries have experienced (at different levels) fading to both the paper and ink, giving one a slightly darker tinge than the other. Sue Townsend often used felt tips rather than biro to write her drafts, and unfortunately these are more prone to fading. Despite this discrepancy I am certain that both pages were taken from the same notebook, as what the photographs do not show is that both diary entries were written on A4, lined paper, and hole-punched on the left hand side. 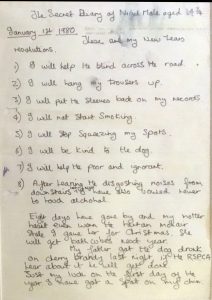 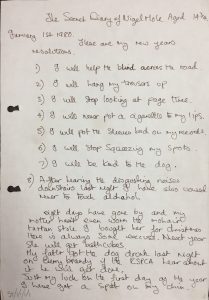 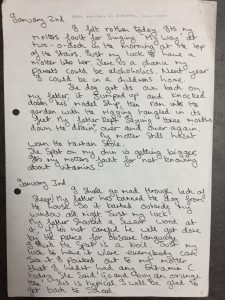 The 2nd page of the original manuscript

Through looking at the original catalogue entry created when the collection was first loaned to the University Library in 2005, I could determine where the manuscript had been kept previously (its ‘custodial history’ in archive terminology). We have in our records that the first complete manuscript – which in its original packaging was entitled ‘Secret Diary of Adrian Mole Original Manuscript’ – was kept in Sue’s solicitor’s office, and that it was opened in October 2003 (a month before the RNIB auction). It was at this point, I would assume, that the pages to be auctioned were removed from the complete manuscript.

As part of my research, I found a photocopy of the auctioned 1st January page in a folder containing photocopies of rough material in the archive. I can only imagine that when the first page was removed from the complete draft manuscript, a photocopy of it was taken to keep for Sue’s record. Why was this kept separately when it went through the cataloguing process? Well, one of the age old principles of cataloguing is the act of retaining the ‘original order’ – which means keeping together the papers which were originally filed in a folder together, rather than dividing these out and mixing with the content of other folders to create an arrangement. This principle is particularly useful for literary archives, as through maintaining the original order of the folders (and their contents) researchers are able to understand how the author went about organising and structuring their work. Very helpful, therefore, in understanding their creative writing process. This, I hope, explains why the photocopied page was kept in a separate folder all these years (a discovery only made through this enquiry!) 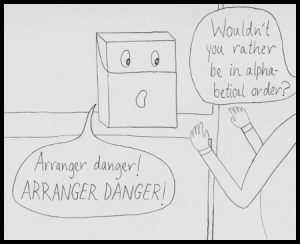 Also within the archive is correspondence between Sue Townsend and a number of charity organisations which Sue actively supported. What is interesting is that in the correspondence folder originally titled ‘RNIB’, there lies just one letter relating to the charity auction in 2003. The letter is written by the event organiser, who thanks Sue for:

‘…agreeing to donate…entries from The Secret Diary of Adrian Mole aged 13 3/4. Framed and accompanied by your letter of authenticity is a very unusual auction lot’

What the letter doesn’t tell us however is which page/s from the diary were chosen to be auctioned! This is an example of how archive research can prove problematic for researchers, as sometimes the full story is not represented in the archive.

What has come to light when looking into this enquiry is that our first page doesn’t match up with the subsequent pages in the draft (i.e. its missing pencil annotations). After much searching I discovered that an additional 5 pages of manuscript which match very closely to our 1st January entry had been filtered (by Sue) into a folder containing rough notes and jottings. The mystery does remain as to why our first page was kept with the complete manuscript when it was donated to the University. Perhaps this was included to substitute the first page removed for the auction. I don’t think we’ll ever know the answer to this question.

From my ‘digging’, I would deduce that Sue wrote both 1st January entries in the same sitting. Similarities can be seen in the handwriting and the observation that both first pages have the same tear around the hole-punch where it appears to have been pulled out of a ring binder folder (or something similar). It’s most likely that Sue decided that the content and ideas in the auctioned diary entry would be taken forward as the book progressed. For example, resolution number 3 (appearing in our version) ‘I will stop looking at page three’ doesn’t appear in any later drafts of the novel.

I would regard both diary entries to be have been written at the same time. However, the content which appears on the auctioned page was taken forward to form the complete manuscript submitted to the solicitor’s office. So to avoid sitting on the fence, I would say it is the auctioned diary entry which should be classed as the ‘original’.

Exploring an author’s archive is a fascinating way of understanding their creative writing process. To see for yourself, why not visit the Library’s Archives & Special Collections to view the Townsend Collection? The archive is open to students, staff and members of the public with a library card (obtainable for free) and operates on an appointment based system (Mon-Friday, 1-5pm).

For more information or to arrange an appointment please contact: specialcollections@le.ac.uk