Posted by Colin Hyde in Library Special Collections on January 28, 2020

In 1974 John Kirby and Geoff Smith started ‘Platform’, a BBC Radio Leicester series about transport. Kirby was already making educational programmes for BBC Radio Leicester as part of a teaching secondment. He met John Cole while visiting the Rev. Teddy Boston’s model railway in Cadeby, Leicestershire, and Cole joined the programme in 1975. The ‘Platform’ team, largely anchored by Kirby and Cole, went on to produce 285 episodes between 1974-1989 and we at the UOSH Midlands Hub are delighted that we have been able to preserve 268 surviving episodes.

The series covered all modes of transport but concentrated mostly on railways. As the two Johns were teachers, much of the work had to be done in the summer holidays, or occasionally at Christmas. The equipment they borrowed from Radio Leicester consisted of UHER tape recorders, tapes, microphones and up to eight batteries – a heavy load! The criteria for whether a story was worth covering was whether the team were interested in it. There were regular updates on the City of Leicester bus fleet, visits to the British Rail research centre at Derby each year, aviation at East Midlands Airport, and visits across the UK to see interesting events and projects. Gradually, the presenters established a reputation for good journalism that gained them interviews with many interesting figures in the industries. 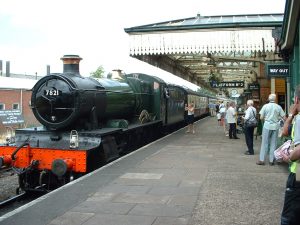 The Great Central Railway (GCR) featured in many Platform programmes.

When we interviewed John Cole in 2019 it was this recognition of the programme’s professionalism and expertise that had stayed in his memory; he and the Platform team respected the people they interviewed and those people respected them.

John Kirby died unexpectedly at an early age in 1985 and this, along with tightened security in the late-1980s, took the wind out of the programme’s sails. It carried on for another three years but wound down with half a dozen ‘greatest hits’ shows in 1990. The final show described how the reel-to-reel tapes were to be copied onto cassettes with the intention that the public would be able to listen to them in Leicester’s central library. Although this happened, the collection ended up in the county archives and, many years later, few people know of its existence.

We hope we can change this situation. Now the programmes have been digitised and catalogued, in the near future they will be available to be listened to by appointment at the University of Leicester. We shall advertise their existence and hope that people with an interest in transport history will find them interesting and useful.

We have been fortunate to enlist the services of knowledgeable volunteers to summarise the Platform programmes and we would like to record our thanks to everyone who helped. John Swanwick offers these reflections on the material he summarised:

Hi. I’m John Swanwick, a volunteer on the Unlocking Our Sound Heritage project (UOSH), making summaries of the ‘Platform’ series of local radio programmes. This amounted to twenty-seven 30 minute programmes in my case and what sounds like a chore, proved far from it! I am retired now but retain a life-long interest in railway history, particularly the railways of the East Midlands. The recordings I listened to mostly cover the early 1980s when I was working away from the East Midlands and away from railways generally, so they fill an important gap in my own experiences, bridging across from my memories of the final days of steam traction on British Railways in my boyhood to railways as they have become in the twenty first century. 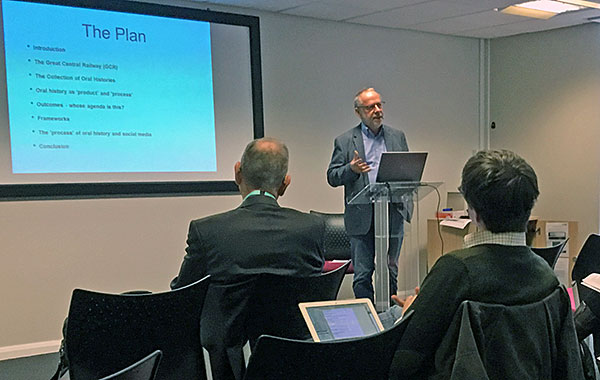 John Swanwick giving a presentation at the National Railway Museum, 2019.

As befits a magazine programme I came across readings of accounts of railway careers from long ago, mixed with interviews of railway managers working on projects as diverse as the re-signalling of the Leicester area, the changing and modernising of the Midland Mainline through Leicester, the redevelopment of Snow Hill station in Birmingham and Liverpool Street station in London. Buses got a mention, as well as coverage of the then emerging railway preservation movement.

By the 1980s British Railways had largely emerged from the ‘Beeching era’ of swingeing cuts and rationalisation of the rail network and was concentrating on rationalisation and redevelopment – as some of the project titles above suggest. In the light of 2020 it’s interesting to hear managers almost boasting about how much track they had rationalised and mileage cut, how they were working on new routes and making use of older and redeployed coaching stock. Hindsight is a wonderful thing but several times I found myself thinking about false economies as well as important and successful reconstructions.

I was helped in my task by my own recollections of the period, enabling me to create a context in my mind for what I was listening to. On the other hand, it is my context and I found it important to remain vigilant and factual in summarising what I heard – even if I was bursting to add a comment or two! I reminded myself many times that I was listening to a version of history – one to be faithfully summarised but not classed as the history of the period.

I confess I got a bit bored on occasions (usually technical discussions about signalling!) but also sometimes inspired. In fact, my time ended on an inspirational note with the last programme I summarised. It began with an account of a woman who, in the 1930s, managed to get a ride on the footplate of an express steam locomotive from Kings Cross to Hitchin. Then there was an interview with a famous railway photographer who had set out to photograph the last days of steam all over the world. It ended with a short sound clip from the BBC archive, of a steam train passing a signal box at Reading just before midnight on 31st December 1947. The following day the railways were nationalised and so the recording was of the last train operated by the Great Western Railway after 112 years’ existence. Why was the whole programme inspiring? Well, because I was listening to history, the sounds of its people and its trains. Just for a moment it felt like the past was really resting on the desk beside me.

Maxwell Taylor and the last GWR train to pass through Reading, close to midnight on 31st December 1947. From Platform 182.

As a railway historian, the summaries offer several case studies on the management of British Railways at that time and I have drawn on several for my own research. I can imagine others will find plenty to refer to in their own research. As a volunteer, overall, my UOSH experience was enjoyable and stimulating and if you ever get the chance to volunteer to take part in something like it, I would say ‘do it’. Oral histories bring the past much closer than you think.

Colin Hyde is currently managing the Sounds for the Future project, which is based in Special Collections. He has run the East Midlands Oral History Archive for many years.

One response to “The Platform recordings – trains, planes, automobiles and volunteers.”