Posted by Colin Hyde in Library Special Collections on January 27, 2020 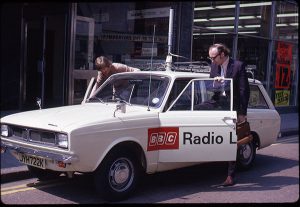 There have always been strong links between the University of Leicester and the UK’s first local BBC station, Radio Leicester – https://le.ac.uk/news/2017/november/radio-leicester-and-the-university-of-leicester-2013-50-years-of-collaboration2019. As part of the Unlocking Our Sound Heritage (UOSH) project we have been digitising a large number of Radio Leicester programmes and we were delighted when we were given some boxes of slides that were taken in the 1970s and feature many of the station’s presenters at the time. The slides also feature the station’s studios at Epic House and shots of Leicester in the early ‘70s. Coincidentally, the photos were taken by Bob Smith, who was assistant engineer at Radio Leicester from  1970-1975, and who has been servicing our Studer tape machines for the UOSH project! 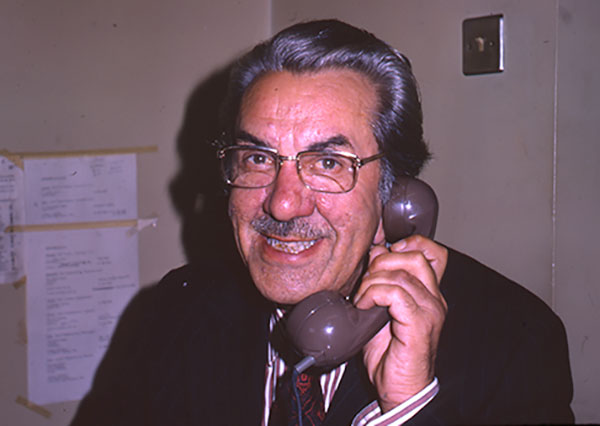 The images, that have now been digitised, enable us to put faces to some of the voices that we hear as we preserve the radio programmes. Roland Orton produced and presented many of the early programmes; many of us remember Dave Kirkwood hosting the county quiz, or John Florence using recordings from the Leicester Oral History Archive for local history programmes in the 1980s. 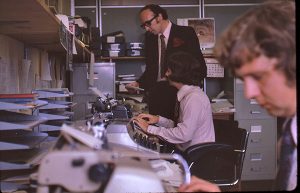 These slides will be added to the Maurice Ennals Collection in the East Midlands Oral History Archive (EMOHA). Ennals was the station’s first controller and his huge collection of scrapbooks and correspondence is a valuable resource. Also, the University of Leicester’s Special Collections has the archives of Prof. Jack Simmons who was an early champion of Radio Leicester and who sat on the first listeners’ panel. Together, these resources constitute a great starting point for anyone who would like to research the history of Radio Leicester and the early days of regional broadcasting in the UK. Are there any takers?