John Evelyn and the war with the Dutch

Posted by Margaret Maclean in Library Special Collections on October 20, 2015 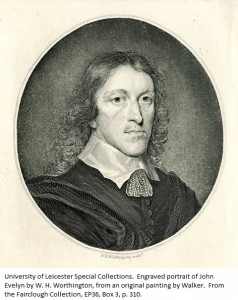 Engraved portrait of John Evelyn by W. H. Worthington, from an original painting by Walker. From the Fairclough Collection, EP36, Box 3, p. 310.

On 27 October 1664, John Evelyn was appointed one of four Commissioners charged with the care of the sick and wounded and prisoners of the Dutch War. One of his core beliefs was that it was the obligation of a gentleman to participate directly in public life, to be ‘usefull to the publique’* and he carried out his duties with great conscientiousness and dedication, even staying behind in London to do so, when the city was ravaged by the Plague and many fled.

The second Anglo-Dutch War, sparked by rivalry over trade in the East Indies and West Africa, began well for the English Navy, with a victory at Lowestoft in June 1665, under the command of the Duke of York, later James II. Evelyn judged that this victory ‘should have ben a complete one, and at once ended ye war, had it ben pursued, but the cowardice of some, or treachery, or both, frustrated that’+. But he was able to witness the ‘bonfires, bells and rejoicing’ in London, before hurrying off to Kent to make arrangements for tending the wounded. Always one with an eye for memorable details, he notes that, at his meeting with James a couple of weeks later, ‘the Duke of Yorke told us that when they were in fight, his dog sought out absolutely ye very securest place in all ye vessell’**.

Evelyn’s nature was humane and compassionate and his concern for the wounded from the Dutch War ran much deeper than duty. In March 1672, he witnessed the amputation of a wounded sailor’s leg, ‘the stout and gallant man enduring it with incredible patience, without being bound to his chaire … I had hardly courage enough to be present.’ ++ 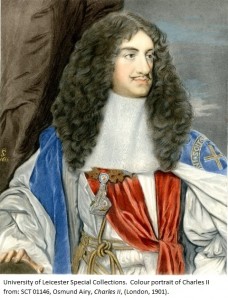 As far back as February 1666, Evelyn proposed to the King that an infirmary for the care of the sick and wounded should be set up. He judged this would have been cheaper and, crucially, would have provided better care than quartering patients in various private houses. Charles listened encouragingly, ‘but I saw no mony’#. Evelyn’s idea, however, was eventually realised in the foundation of the Royal Hospitals at Chelsea and Greenwich and, characteristically, he retained his enthusiasm for the project to the end of his life, serving from 1695 on the Commission for endowing a Hospital for Seamen at Greenwich. 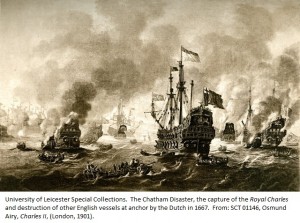 The Chatham Disaster, the capture of the Royal Charles and destruction of other English vessels at anchor by the Dutch in 1667. From: SCT 01146, Osmund Airy, Charles II, (London, 1901).

After the victory at Lowestoft, things went downhill. Louis XIV’s declaration of war on England in 1666, together with the problems of Plague and the Great Fire of London at home and poor strategy and leadership by Charles II and his naval commanders, all culminated in the humiliating destruction by the Dutch of the docked fleet at Chatham in June 1667, dramatically described by Evelyn:

‘The alarme was so greate that it put both Country and Citty into a paniq feare and consternation, such as I hope as I shall never see more; every body was flying, none knew why or whither.’##

Even the level-headed Evelyn was sufficiently worried that the enemy might ‘venture up ye Thames, even to London (which they might have done with ease …)’, that he sent away ‘my best goods, plate, &c’## to a place of safety. 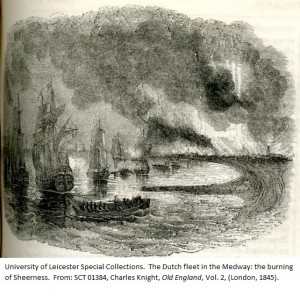 This ignominious episode was soon followed by the Treaty of Breda, which ended the war.

Our current exhibition salutes Evelyn’s commitment to public service – and the extraordinary variety of his many other interests and talents.  The exhibition runs until 29 January 2016. Entry to the library is free but controlled, so if you are not a student or member of University staff, please ask to be let through the barrier. Details of staffed opening hours are available on the library website.