Posted by Simon Dixon in Library Special Collections on May 22, 2018 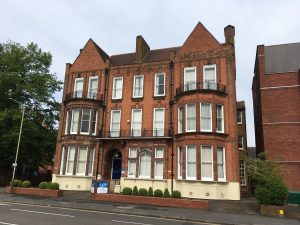 On 14 November 1917 The Leicester Daily Post, edited by W. G. Gibbs, published a leader article proposing the foundation of a University College as a war memorial for Leicester and Leicestershire (University of Leicester Archives, ULA/PCB1, p. 1).  Among the first to respond in support of the proposal was Miss Florence Rich, the Principal of Granville School, Granville Road, Leicester, who wrote to the paper stating that:

A revival of university life is one of the most urgent needs of the time; not only to help men and women to rise to the full height of their spiritual possibilities, but also that they may learn through discourse with the best minds, and mutual understanding to compose their discords. (Scrapbook on the foundation and early development of University College, Leicester, ULA/D2/1, f. 5v.)

When a meeting was called by the town’s Mayor, Sir Jonathan North, the following March, Miss Rich was one of two women present along with eighteen men (ULA/D2/1, f. 4v). She went on to become a subscriber to Leicester, Leicestershire and Rutland College (predecessor to the University), and a member of the Court of Governors and the Botanical Gardens Committee. As part of a Research Commission supported by Leicestershire County Council’s Heritage Lottery Fund project, Century of Stories, I am investigating the lives of founding donors to the University of Leicester.

This post brings together my findings about Florence Rich and Granville School for Girls. A brief account of Florence’s life is provided by Marlene and Geoffrey Rayner-Canham in Chemistry Was Their Life: Pioneering Women Chemists, 1880-1949 (2008). This has been supplemented with information gleaned from census records, newspapers, and trade directories accessed via Ancestry Institution, Gale Primary Sources, and our Special Collections Online. I am grateful to Katie Bridger, who worked as Research Assistant on the project until February 2018, for her contribution to the research on which the post is based.

Born in 1865 in Weston-super-Mare, Mary Florence Rich was the daughter of a chemist, Thomas Rich. Educated at Haberdasher Aske’s Hatcham School for Girls, in 1884 she entered Somerville Hall, Oxford as a Clothworkers’ Scholar. Here, she was mentored by her more celebrated contemporary, Margaret Seward. After completing an Honours in Natural Science in 1887, she held teaching posts at first Llandaff then Grantham, before spending 13 years as a science mistress at Roedean. In 1906 she moved to Leicester to become Principal of Granville School, where she remained until 1922. From then until her death in 1939, she was a Research Assistant at Queen Mary College, London, working with Felix Eugene Fritsch. Her principle research interest was in the study of freshwater algae, particularly of Africa. Brief obituary notices appeared in Nature (20 May 1939) and The Times (27 April 1939). Nature described her as ‘an active and enthusiastic’ contributor to her field, and The Times noted her ‘happy influence over her pupils’ many of whom she inspired with her love of Natural Science.

In a marked degree she possessed originality, the power of making friends, and of enjoying life’s highest pleasures. (The Times, 27 April 1939, p. 31)

After leaving Leicester she settled in Ruislip, Middlesex, where she founded a branch of the National Council of Women. 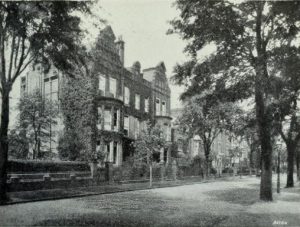 By the time Florence Rich arrived in Leicester, Granville School (originally Granville College) was well established at 11 Granville Road. Based on trade directory evidence, the property was built as a private dwelling around 1880. Its first occupant was William Stanyon, boot and shoe manufacturer, who is recorded as resident in the 1881 census with his wife, six children, and two servants. By April 1892 the Stanyon family had left, and newspaper advertisements were appearing for ‘Granville College for Girls’, under Miss Sarah Elizabeth Roberts (Stamford Mercury, 8 April 1892, p.1). She had previously run a girls’ school a short distance away at 98 Regent Road, suggesting the relocation of an existing establishment. Miss Roberts was still in post in 1899, but by the time of the 1901 census had retired to live with her sister at 84 Regent Road. Granville College was run for the next few years by Miss Mary Hampton, and something of the character of the school can be gleaned from press advertisements:

When the school was taken over by Florence Rich in 1906, the name was changed from Granville College to Granville School. Judging from the 1911 census, it was a fairly substantial establishment with the names of four additional teachers recorded as resident. These included Florence’s sister, Muriel Constance Rich, and a young French woman named Julia Albertine Chevalier. The names of eight boarders are provided, aged between 12 and 19, and four domestic servants. Paton’s List of Schools and Tutors for 1911 advertised fees of 25 guineas a term, the equivalent of around £2,000 today (p. 887).  Under Miss Rich the school’s aim was to provide a rounded education, as expressed in Whitakers Peerage, Baronetege, Knightage and Companionage (1916), p. lii:

Aim. – To impart knowledge by systematic teaching on approved lines, arouse an interest in reading, cultivate taste, encourage self-reliance, and generally develop faculties of the girls and fit them for the duties of everyday life.

The pupils were prepared for any examinations desired by their parents, and some went on to study at a higher level. Two were admitted to Rich’s alma mater, Somerville: Hilda Rockliffe Gibbs and Muriel Murray. In 1920 Edith Alleen Webb passed the University of London matriculation examination and the following year was among the first cohort of students admitted to Leicester, Leicestershire and Rutland College. (Nottingham Evening Post, 6 Nov. 1920, p. 2)

Trade directories in the Library’s collection record that Florence Rich was succeeded as Principal of Granville School by a Miss A. Fawcus, who remained in post into the 1930s. By 1935, the school had closed and 11 Granville Road was purchased by the First Church of Christ, Scientist, which had been established in Leicester in 1911. Building work required to make a new auditorium was postponed owing to the outbreak of war, and finally completed in 1952 with the dedication taking place in 1956. The building is now occupied by Mark J. Rees, Chartered Accountants, founded on Granby Street in 1938 by former Wyggeston Grammar School pupil Mark Jacob Rees.

To find out more about the role of women in the history of the University of Leicester, visit the Women in our History exhibition in the Library Basement, running until 31 August 2018.

With many thanks to Dr Anne Manuel and Kate O’Donnell of Sommerville College, Oxford, for providing information about Granville School pupils admitted to Somerville Hall.

2 responses to “Florence Rich and Granville School for Girls”