Posted by Sarah Wood in Library Special Collections on January 19, 2018

As a recent graduate of Contemporary History from the University of Leicester, I have had to consider what to do with my degree – a somewhat arduous task that befalls many a graduate. After, debating my career path, I set my sights on what I enjoyed most whilst completing my degree – researching and delving through old books, newspapers and articles to uncover titbits of information from our history. The opportunity to work in such an environment, therefore, could not be refused when the Careers Office put such an enticing offer forward.

Within the first few days it became apparent that I had missed out a fair chunk of the University when I studied here as an undergrad – entire parts of the library I had either been unaware of or had failed to visit. I had, rather naively, been complacent of the vast network of people it took to keep the library up and running. My first morning introduced me to a variety of people who work, quite literally, behind the scenes of the library, hidden away in offices in part of the library out of student access. After this I ventured down to the basement for the first time to the Special Collections Office, before being taken on a tour of the archives store; I was fortunate enough to be shown the contents of some of the collections, for example the many and varied papers and illustrations of the internationally famous Engineering Building (a building I later discovered has been listed as Grade II*). I also looked at some of the more colourful archives, specifically the literally vibrant children’s books. I was also shown some items that were more directed to my interests to flatter my undergraduate dissertation research into Leicestershire in the First World War, namely the history of the Fifth Northern General Hospital Leicester (HIS/PH/2/1), the hospital that was adapted for the treatment of soldiers during the War. Spending close to an hour in the archive store being an interesting, but rather chilly experience, I was then treated to a cup of tea with the Special Collections team – the tea break, I was overjoyed to learn, was a daily venture! 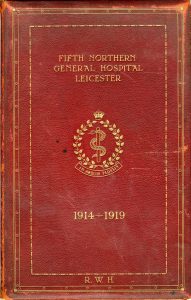 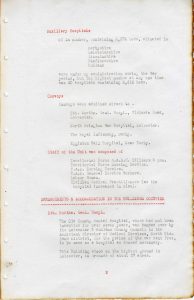 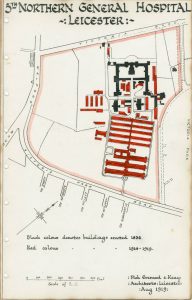 In the afternoon I was set my first task of indexing the annual reports, which would occupy me throughout the entirety of my placement. This was part of the University History Project I worked on, gathering names, dates, positions and other notes about the staff from the early days of the University College. To get an overview of the origins of the University, I skimmed through New University by Jack Simmons as despite having studied, (and, of course, partied) within these buildings for three years, I had little to no understanding of the history of my own university. During my studies I was quite content to walk amongst these grandiose buildings, not questioning why they have been named as they have or who the people were. In fact, should I have been asked who Charles Wilson, Percy Gee or Fielding Johnson were, my honest reply would have been simply, “I don’t know”. This placement has, at the very least, taught me all about my university and its history, and the more items I go through in the archives and books, the more flickers of recognition occur. Indeed, upon a couple of visitors’ trips to the Special Collections Office to discuss previous faculty members, I was able to follow the conversation and contribute my own findings to the discussion. Continuing with this project, I assisted in the 100 Images Workshop – (for the University History Project, 100 images are being collected that represent the past 100 years of the College/University). This involved learning how to correctly sign out the archives from the store, in this case, the photographs of the University, and preparing them for visitors to look through. Pleasantly, the workshop was a big success, with far more nominations of photographs than had initially been projected. I set about creating an online database for these nominations, then began the next step to digitise the photos. For this I had to learn the correct procedure of scanning photographs and slides in the best format, the highest resolution, and without causing damage to the items themselves. 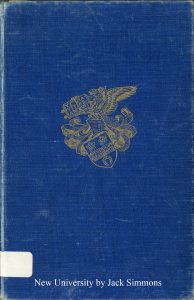 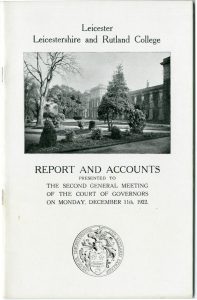 The University’s history is something I feel is not necessarily well-known amongst the current student population. As such, the importance of the University History Project should not be understated, and I am proud to have played a small part in promoting this great University’s history, as this project will enable not just the current students but all those who wish to easily uncover the roots of the university and learn of the journey it has gone on.

The second week was dominated by my second project for International Women’s Day 2018, in which I researched women of the University. Much of my findings have come from one of my tasks, that of repackaging archive material. Looking through this material I read biographies, obituaries, retirement messages, and staff files, discovering some of the quirks and personalities of previous staff. I have also gone through the online archives in order to add more depth to the women I have come across, for example by adding a photograph or document of the women. In doing this, I have come across far more women, and in far greater detail, than are mentioned in the overviews of the history of the College/University.

There have been so many great women at the University of Leicester, but sadly they have not been as high profile as the men – to see this in effect you only have to look around the University and you will notice that not one building has been named after a woman. It would appear that many of the women I have come across have been overlooked, despite their incredible achievements. Mr Rattray and Mr Attenborough and all of the men who have been honoured were indeed brilliantly accomplished men, but there should also be recognition of the women, without whom the University would not be as it is today. For example, Miss Rhoda Bennett, one of the first nine students and the first full-time librarian who dedicated over thirty years of her life to the University and transformed the library. She had assistants throughout her years working there, but it was she who spent so much time and energy to make the library a success. She dealt with difficult circumstances, (a lack of funding, a lack of staff, inadequate premises, and the problems caused by the Second World War), and oversaw big changes to the library to enhance the learning of students, including students of both the University of Leicester and King’s College, London, who shared the premises during the War. When put into context with the great number of people who work in the library that I met on my first day, Miss Bennett’s achievements ought to be more public than they are currently. 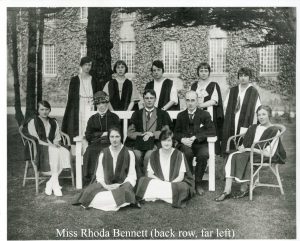 The University College was also home to women who had performed excellent work during both World Wars. Miss Mariette Soman, (later Mrs Leon) helped decode German wireless messages by working in Room 40 at the Admiralty, a service for which she was later awarded an MBE. Miss Soman also attended the Paris Peace Conference in 1919 as the Secretary to the Director of Naval Intelligence. Joan Thirsk, a pioneer in agrarian history and lecturer in the Department of History at the University College, spent a period working at Bletchley Park. Yet before this project, I knew nothing about these incredible accomplishments. 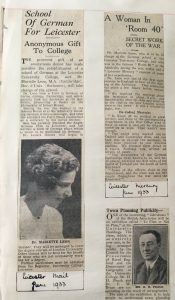 This is why this project is so important, as it highlights the contributions by women here not just to the University, but to the nation, their academic fields, and society. All that they achieved should be acknowledged and celebrated, and this project should encourage more women’s endeavours to be unearthed and celebrated.

My experience here, though only the short time of two weeks, has taught me a lot about my University, and importantly has introduced me to archives and what can be achieved by preserving our history. The Special Collections Department has introduced me to a variety of tasks that archivists undertake and the placement has confirmed my desire to work where I can continue to uncover or preserve items to give history a future.