Posted by Helen Ward in Library Special Collections on January 22, 2018

Among the items held in the University of Leicester Institutional Archives are a series of Press Cuttings. Compiled from 1922 to the present day they consist of articles taken from the local press, mainly the Leicester Mercury, though articles from national newspapers and occasionally journals are included.

As Library Assistant in Archives and Special Collections one of my tasks has been continuing to add to the name index for these Press Cutting Books. This is being created to help us access more easily the rich information within the books when we receive enquiries about people connected to the university or locality. The index, as you would expect, includes prominent people holding high office within the university or local community but also other staff (academic and non-academic) and students. The task provided a much needed introduction to some of the history of the University from the late 1940s onwards and continues to be fascinating in a number of ways.

Many of the cuttings include opinions alongside the biographic details of the people they are about, giving an insight into their personalities which fills out what we are able to discover about them in other institutional documents. Particularly striking characters include environmentalist Professor P G Sylvester Bradley, shown in the article, and Professor Hans L. Kornberg. We gain information about Professor Kornberg’s social life through a news story about him narrowly avoiding an earthquake that hit Los Angeles in March 1971. Also missing his dinner date at the “Hollywood home of an old friend, film star Julie Andrews” because he was called back “for some urgent government business” a few hours before the earthquake struck. (ULA/PCB 15 p66 3 Mar 1971 Leicester Mercury) 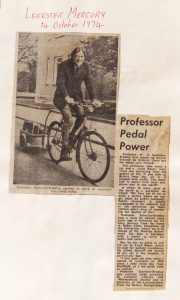 Professor P G Sylvester Bradley cycling to work in 1974. “Cars are detracting from the quality of life. If you look at Britain from the air it is clogged with traffic”.

There is ample coverage of the relationship between the University, its students and the local community. Inevitably occasionally fractious (though a student’s complaint about noise from community celebrations was a surprise) but more often positive. The desire to increase awareness of the university’s work and to co-operate for good in the local community is apparent, shown in particular by the successful student led project to provide an adventure playground for children in Spinney Hill Park. 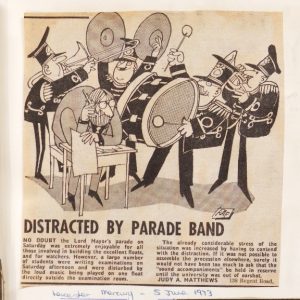 Student Judy A Matthews’ complaint to the Leicester Mercury in 1973 having had her exams disrupted by the “Sound accompaniments” on a float taking part in the Lord Mayor’s Parade. Alongside local residents’ concerns about noise from Villiers Hall students in 1970. 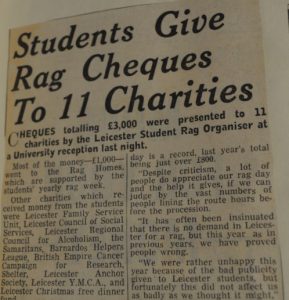 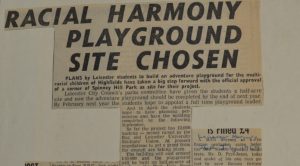 Funds raised during Rag Week in 1968 were donated to 11 local charities. Student volunteers were involved in the planning and creation of a half-acre adventure playground in Spinney Hill Park. Chairman of the student committee, Cecil Gutzmore, spoke about his vision for it: “In the playground we envisage there will be an atmosphere where children can break things, or create things as they please. It will also be a place where children can learn to live together.”

The cuttings also provide a snapshot of the social, cultural and technological change undergone at the university and in society more widely. Developments in equality and diversity are a good illustration. Many firsts for the university, including the appointment of the female professor, Doctor Olive Banks, in 1971 and the Students Union’s creation of a Gay and Lesbian Equality Officer post in 1988, are recorded. (ULA/ PCB 27 p38 1988 Leicester Mercury) 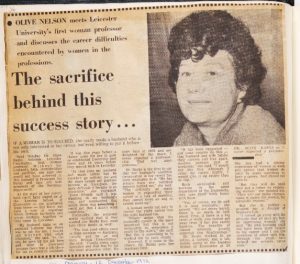 Dr Olive Banks being interviewed about her career on her appointment as the first female professor at Leicester University. “A woman needs not only choose the right career but the right husband too.”

Press reporting about the successfully elected Student Union President over the years can be especially revealing. When Wilf Dillon a second year social science student won the vote in 1971 the coverage seemed preoccupied with his age. The headline read “Grandad is students’ choice – Lovely” but Wilf himself was unfazed saying “Age does not matter. If people vote for me they obviously see no generation gap. Consequently I don’t see any problems.” (ULA/PCB 15p22 26 Feb 1971 Leicester Mercury).

Similarly, when Jane Goldsmith became president in 1975, she was “Leicester’s first women president for 40 years”, much of the focus was initially on her gender and was met with equal aplomb. When asked by journalist Joan Stephens about her ambitions for the future she replied “Secretary General of the United Nations perhaps …Seriously though I feel the sky’s the limit.” (ULA/PCB 17 p9 6 May 1975 Leicester Mercury)

Having the benefit of hindsight, or knowledge of how the stories reported on ultimately played out, does sometimes lend the cuttings an air of nostalgia. One example is an article in January 1989 headlined “‘Smart card hits a snag” which reports on ‘teething troubles’ with an experimental payment card (“a possible alternative to cheque and money”) being trialled by Midland Bank with their student customers. A student comment “(T) he novelty has worn off. They are not as useful as they might be” suggests there were improvements before they ultimately became ubiquitous. (ULA/PCB 31 p61 26 Jan 1989 Leicester Mercury) Similarly, an article in 1984 reminding readers about the practice of arranging dates via post card before telephones (landlines) were commonplace could not have forecast further change brought about by mobile technology or social media. 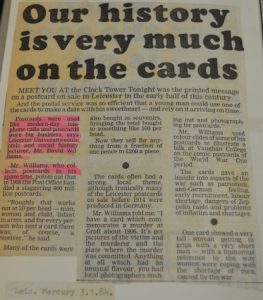 David Williams, Economic and Social History Professor, discussing the use of postcards to communicate in the early half of the Twentieth century “In 1908 the Post Office delivered a staggering 800 million postcards. Roughly that works out at 20 per head.”

Seeing the initial press coverage a discovery or breakthrough generated is a good reminder of how significant some of the knowledge or technologies we now take for granted were and remain. There are numerous examples, only two of which are illustrated in the following articles. 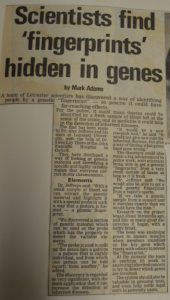 A press report on the genetic fingerprinting and its application. “Professor Jeffreys’ methods were first used to solve the Colin Pitchfork murder cases in Leicestershire and were even mentioned recently on the EastEnders programme by police trying to solve the “Dirty Den” case. “You know you’ve arrived when your work gets on a soap”, Prof Jeffreys said.”(ULA/PCB 31 p124 10 Apr 1989 Leicester Mercury) 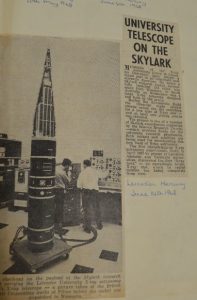 The Skylark Research Rocket aboard which the Leicester University X-ray astronomy group’s X-ray telescope was carried 115 miles into space in search of “X-ray Novas”, “a new type or X-ray star – and at least one strong source was revealed.”

I look forward to uncovering more interesting articles as I continue indexing the Press Cuttings Books and being able to make use of the index in the future to assist researchers when they make enquiries.