Posted by Simon Dixon in Library Special Collections on September 13, 2017

This post draws on early research carried out as part of a research commission from A Century of Stories, a Heritage Lottery Funded project exploring the individual and shared legacy of the First World War in Leicestershire, run by Leicestershire County Council. The research, which will be completed during the next year, explores the role of philanthropic giving in the founding of Leicester, Leicestershire and Rutland College (forerunner to the University of Leicester) as a memorial to World War I. It focuses on donors to the college named in the University’s Golden Book, held in the University Archives. I am very grateful to Katie Bridger of the Centre for English Local History for conducting archival research at the Record Office for Leicestershire, Leicester and Rutland, on which much of the following is based. 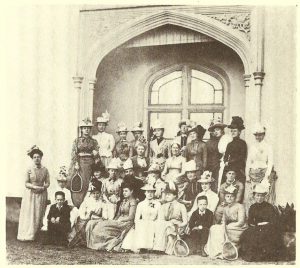 Among the list of individuals and organisations contained in The Golden Book as giving money to found our University is the Belmont House Society. This Society was founded in 1886 for former pupils at Belmont House, a girls’ school located in what is now the Belmont Hotel. The school had originally occupied premises in the Newarke, where it was run by the Quaker Stringer sisters. By the time it moved to Belmont House, it was under the management of Catharine Stringer, who became Mrs Schneider after marrying Augustus Schneider, a teacher of music and languages. From Mrs Schneider it passed to another Quaker, Katharine Amos, who ran the school until 1876 when it was taken over by Anna Beale, the sister of Dorothea Beale, Headmistress of Cheltenham Ladies College.

There was no room for ‘adoration’ of Miss Beale; she was unattractive in person, in obviously poor health, and wore a great woollen shawl. She was very strict in discipline, and with a code of manners that emanating from Cheltenham College,  was entirely alien to Leicester. [Isabel C. Ellis, Records of Nineteenth Century Leicester (n.p., 1935), p. 261.]

While she may not have been blessed with a very warm character, Miss Beale introduced a number of pedagogical innovations to the school. She invited visiting science lecturers, introduced examinations, and was the first Headmistress in Leicester to prepare pupils for the London University Matriculation exams. A number of her pupils went on to University, with one going to Newnham College, Cambridge, four to Mason Science College (now Birmingham University), and one to Holloway College. In 1882 she was joined by her friend from Cheltenham, Agnes Kilgour (later Agnes Evans), who took over the school on Beale’s retirement through ill-health the following year. 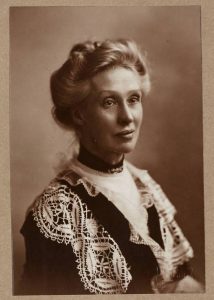 Agnes Archer Evans played an active role in local life, and was a member of the Council of Vaughan College, co-founder of the Leicester branch of the National Council of Women, and served on the Leicester School Board. In 1913 she became the first female President of the Leicester Literary and Philosophical Society, delivering her Presidential Address on the subject of ‘Finland and its Kalevala’.

The Belmont House Society was originally established for ex-pupils of the school. In July 1886 Miss Beale wrote to her former students extolling the virtues of such assocational activity:

. . . .I am sure you will all agree that the aim of all should be that thus uniting yourselves together you may become more worthy citizens, ready to further in your town and country all that would improve yourselves and your neighbours. [Quoted in S. E. Francis, ‘”Worthy Citizens” Middle Class Women in the Public Sphere in Leicester c. 1850-1900’ (MPhil thesis, University of Leicester, 2013), p. 158

After the school closed in 1893, membership was opened up to other local women. Isabel Ellis described the Society’s meetings as held for ‘social and intellectual intercourse’, stating that:

The real value of membership has proved to consist in the fact that everyone is expected to contribute in some way to the corporate life. [Ellis, Records, p. 268]

A look at the detailed records of meetings in the Society’s Minute Books, held at the Record Office for Leicestershire, Leicester and Rutland (ROLLR), indicates that the membership comprised members of many well-known local middle-class families, with the names Gee, Ellis, Gimson, and Wykes appearing regularly. [ROLLR, 18D57, Records of the Belmont House Society] One especially active and prominent member was Ethel (Poppy) Clarke [née Gee], wife of Dr Astley Clarke. The Society engaged in a range of activities, including philanthropic work, arts and crafts, and amateur dramatics. Among its early initiatives was a Girls’ Evening Home for working girls aged under fifteen, intended to complement a similar institution for older girls at 30 Gallowtree Gate. The Girls’ Evening Home movement emphasised reading, music and cooking, in an effort to draw factory girls away from ‘aimless street saunters’ and the attractions of the ‘fancy fair’. [Judith R. Walkovitz, Prostitution and Victorian Society: Women, Class and the State (Cambridge, New York & Melbourne, 1980), p. 244.] The women of the Belmont House Society gained a particularly strong reputation for their dramatic productions, which were regarded as the best in Leicester. [Francis, ‘”Worthy Citizens”‘, p. 159]

At the September meeting of the Society in 1921 a letter was read from Gertrude Vincent, appealing for help towards the funds of the soon to open University College. It was agreed that the proceeds of their next play should be put to this cause, and the following month Ethel Clarke was asked to stage manage the production with the option to choose her own committee. By November, it had been agreed that a production of Prunella, a romantic fantasy by Laurence Housman and Harley Granville Baker, would be performed the following February at the Knighton Church Rooms, stage management duties having passed to Mrs H. Thompson. The performance was considered a success, with £87 1s handed over by Ethel Clarke to the University College funds. When the Society met in March, it was recorded that if the amount could be increased to £100 members would be invited to nominate one of their number to serve on the College committee. It was proposed to raise the balance through members all bringing an item worth 1s to the next Arts and Crafts Exhibition, and each buying a 1s item from the event. Unfortunately, this didn’t quite achieve the desired aims, with £6 2s 10d raised and gifted to the College.

The next references to the University College in the Belmont House Society records appear in 1924, with the March meeting held at the College. A tour of the buildings by the Principal, Dr Rattray, was followed by ‘a very good tea’ in the Domestic Science Department. It was minuted that,

Members present very much regretted that there was such a poor attendance at this meeting as it was felt that the Belmont House Society ought to be more closely linked with the College than they are at present & that this was one way of doing it. [ROLLR, 18D57/3, Belmont House Society Minutes, 12 Mar. 1924]

Although it seems that the close formal links hoped for in 1922 never materialised, there were a number of individual Society members who made significant contributions to the life of the College during its early years. Agnes Archer Evans, the last Headmistress of Belmont House, was a strong early supporter and Governor of the College. Ethel Clarke, as well as organising the production of Prunella, made a major fundraising contribution to the College as Chair of the organising committee of the highly successful Bazaar and Fete in 1922, which raised over £15,000. A former pupil at Belmont House, she was Chairwoman of the Society in 1900 and served as secretary during the war years.

Another link came through Isabel Clara Ellis (nee Evans, 1863-1936). Educated at Belmont House, she went on to study physical and life sciences at Mason College, Birmingham, passing the London University Intermediate Science exam in 1883 before leaving without completing her studies. From there, she seems to have made efforts to become a medical doctor, but was unable to fulfil this ambition. In 1891 she married Bernard Ellis, with whom she had four children. One of them, Oliver, was killed in action during the First World War, and the subject of an in memoriam donation of £1,000 by his parents towards Leicester, Leicestershire and Rutland College. Isabel became the first Chairwoman of the Belmont House Society in 1886, a position she held again in 1888 and 1897. Her contribution to College life was substantial. She served on Court of Governors from 1921-29, the College Council, and the Academic Advisory,  Finance, General Purposes, and Botanical Garden committees. She was particularly interested in the Botany Department, and was instrumental in the creation of a rock garden on the south-west front of the College. [Shirley Aucott, Women of Courage, Vision and Talent: Lives in Leicester 1780 to 1925 (Leicester, 2008), pp. 84-88]

The connections between the Belmont House Society and Leicester, Leicestershire and Rutland College highlight a number of important points about the origins of the University. The first of these is the importance of existing local networks and voluntary forms of association in galvanising support for the scheme to found a University as a war memorial. The Society was one of a number of organisations, which also included the Literary and Philosophical Society, Rotary Club, and West End Association, to make made meaningful contributions to the College. Individual members of these organisations also made financial donations in a personal capacity, some in memory of loved ones they had lost such as Mr and Mrs Ellis. Many of those listed in The Golden Book and annual reports as donors and subscribers were connected to one another in some way: through family networks, business associations, social networks, and shared interests. But the involvement of the Belmont House Society also highlights another important point, which has been overlooked in published accounts of the University’s origins. This is the active role of women such as Ethel Clarke, Agnes Evans, and Isabel Ellis in the founding of the original College and in shaping its early development. In the case of the Belmont House Society, this provides a direct link with developments in girls’ education during the nineteenth- and early twentieth-centuries, and advances such as those pioneered by Anna Beale, the first Headmistress in Leicester to prepare her pupils for the London Matriculation exams. As we approach the centenary of the University over the next few years, it will be important to look beyond established sources, and the University’s own archives, in order to fully understand these connections and the role of the local community in the development of higher education in Leicester.