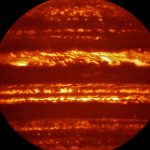 Posted by Physics & Astronomy in Leicester to Jupiter: The Juno Mission on June 29, 2016

This article was released by the European Southern Observatory, Royal Astronomical Society and University of Leicester press office on Monday June 27th to coincide with the UK National Astronomy Meeting.   Stunning new images and the highest-resolution maps to date of Jupiter at thermal infrared wavelengths give a glowing view of Juno’s target, a week ahead […]

During Juno’s time at Jupiter, we will have the fantastic opportunity to study the most powerful aurora in the solar system. An aurora is light emitted by atoms and molecules that have been excited through collisions with very energetic particles that enter a planet’s atmosphere along the planet’s magnetic field lines. The generation of Jupiter’s […]