Posted by Leigh Fletcher in Leicester to Jupiter: The Juno Mission on June 29, 2016

This article was released by the European Southern Observatory, Royal Astronomical Society and University of Leicester press office on Monday June 27th to coincide with the UK National Astronomy Meeting.

Stunning new images and the highest-resolution maps to date of Jupiter at thermal infrared wavelengths give a glowing view of Juno’s target, a week ahead of the NASA mission’s arrival at the giant planet. The maps reveal the present-day temperatures, composition and cloud coverage within Jupiter’s dynamic atmosphere, and show how giant storms, vortices and wave patterns shape the appearance of the giant planet. The observations will be presented on Monday 27 June at the National Astronomy Meeting in Nottingham by Dr Leigh Fletcher of the University of Leicester. 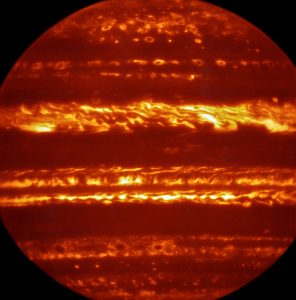 In preparation for the imminent arrival of NASA’s Juno spacecraft in July 2016, astronomers used ESO’s Very Large Telescope to obtain spectacular new infrared images of Jupiter using the VISIR instrument. They are part of a campaign to create high-resolution maps of the giant planet to inform the work to be undertaken by Juno over the following months, helping astronomers to better understand the gas giant. This false-colour image was created by selecting and combining the best images obtained from many short VISIR exposures at a wavelength of 5 micrometres. Credit: ESO/L. Fletcher

The high-resolution maps and images were created from observations with the European Southern Observatory’s Very Large Telescope (VLT) in Chile, using a newly-upgraded thermal imager called VISIR. The observations were taken between February and June 2016 to characterise Jupiter’s atmosphere ahead of Juno’s arrival.

“We used a technique called ‘lucky imaging’, whereby individual sharp frames are extracted from short movies of Jupiter to ‘freeze’ the turbulent motions of our own atmosphere, to create a stunning new image of Jupiter’s cloud layers,” explained Dr Fletcher. “At this wavelength, Jupiter’s clouds appear in silhouette against the deep internal glows of the planet. Images of this quality will provide the global context for Juno’s close-up views of the planet at the same wavelength.”

Dr Fletcher and his team have also used the TEXES spectrograph on NASA’s Infrared Telescope Facility (IRTF) in Hawaii regularly to map Jupiter’s changing appearance. The team made observations at many different wavelengths, optimised for different features and cloud layers in Jupiter’s atmosphere, to create the first global spectral maps of Jupiter taken from Earth. 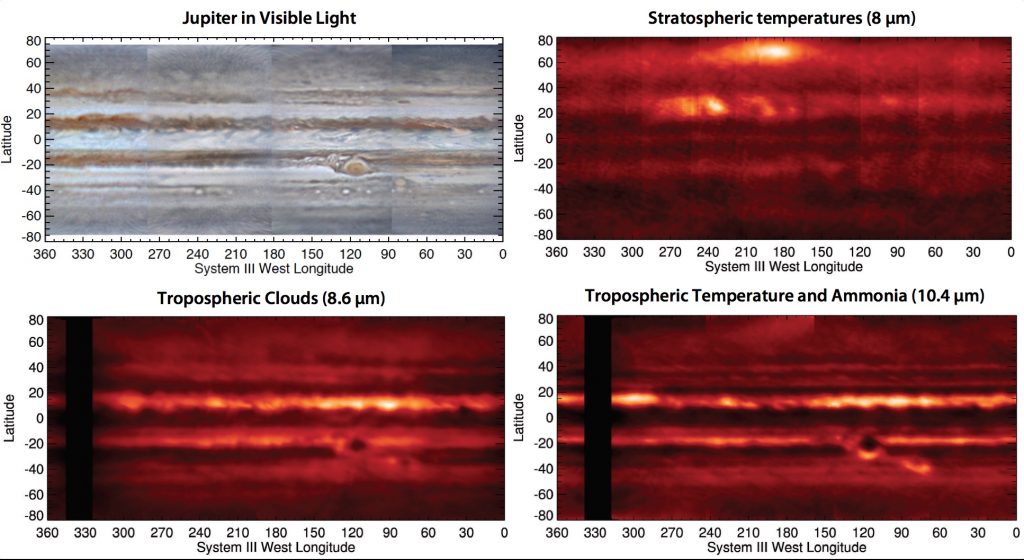 “These maps will help set the scene for what Juno will witness in the coming months. We have seen new weather phenomena that have been active on Jupiter throughout 2016. 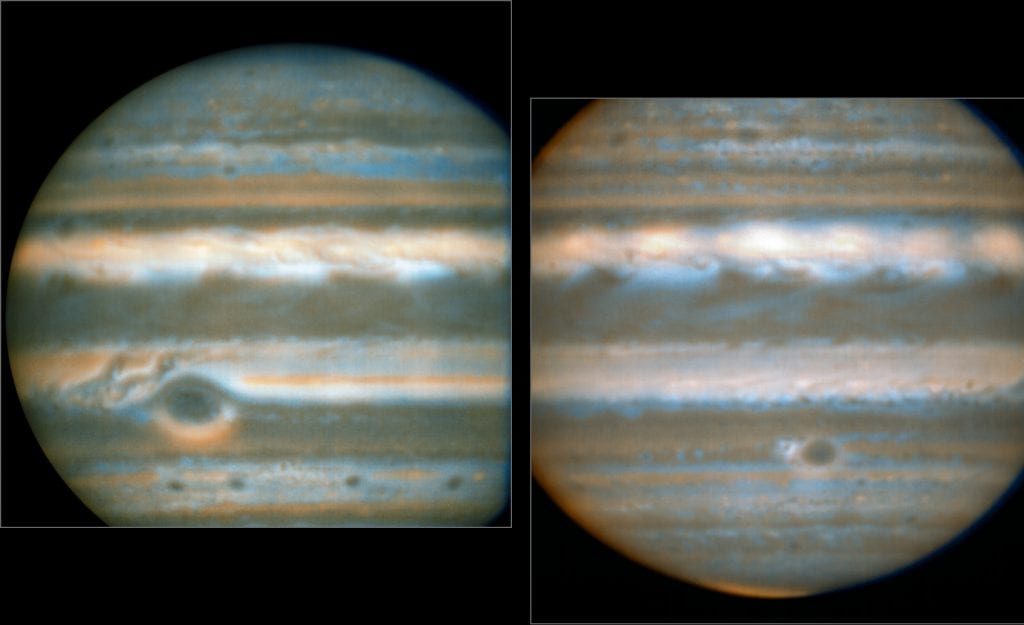 False colour images generated from VLT observations in February and March, showing two different faces of Jupiter. The bluer areas are cold and cloud-free, the orangey areas are warm and cloudy, more colourless bright regions are warm and cloud-free, and dark regions are cold and cloudy (such as the Great Red Spot and the prominent ovals). The wave pattern over the North Equatorial Band shows up in red. This view was created by combining VLT/VISIR infrared images from February 2016 (left) and March 2016 (right). The orange images were obtained at 10.7 micrometres wavelength and highlight the different temperatures and presence of ammonia. The blue images at 8.6 micrometres highlight variations in cloud opacity.

These include a widening of one of the brown belts just north of the equator, which has spawned wave patterns throughout the northern hemisphere, both in the cloud layers and high above in the planet’s stratosphere,” said Dr Fletcher from the University of Leicester’s Department of Physics and Astronomy. “Observations at different wavelengths across the infrared spectrum allow us to piece together a three dimensional picture of how energy and material are transported upwards through the atmosphere.”

Both sets of observations were made as part of a campaign using several telescopes in Hawaii and Chile, as well as contributions from amateur astronomers around the world, to understand Jupiter’s climate ahead of Juno’s arrival. The ground-based campaign in support of Juno is led by Dr Glenn Orton of NASA’s Jet Propulsion Laboratory. Once in orbit around Jupiter, Juno will skim just 5000 km above Jupiter’s clouds once a fortnight – too close to provide global coverage in a single image. The Earth-based observations supplement the suite of advanced instrumentation on the Juno spacecraft, filling in the gaps in Juno’s spectral coverage and providing the wider global and temporal context to Juno’s close-in observations.

“The combined efforts of an international team of amateur and professional astronomers have provided us with an incredibly rich dataset over the past eight months,” said Dr Orton. “Together with the new results from Juno, this dataset will allow researchers to characterise Jupiter’s global thermal structure, cloud cover and distribution of gaseous species. We can then hope to answer questions like what drives Jupiter’s atmospheric changes, and how the weather we see is connected to processes hidden deep within the planet.”