Posted by Physics & Astronomy in Leicester to Jupiter: The Juno Mission on August 24, 2020

Long-term infrared monitoring of Jupiter’s equatorial stratosphere over three decades revealed a natural cycle of variable winds and temperatures. New research in Nature Astronomy by Antuñano et al. (2020,  https://www.nature.com/articles/s41550-020-1165-5) has found that this stratospheric cycle can be spectacularly disrupted by global upheavals happening far below.

Jupiter, the largest planet of our Solar System, displays some of the most complex atmospheric dynamics of any known world, leading to dramatic planetwide weather changes. Exploring this variability is essential to uncover connections between the mysterious deeper layers of giant planets (including Saturn, Uranus and Neptune) and their visible atmospheres.  What we learn serves as a paradigm for giant planets throughout the cosmos, and might even shed new light on the Earth’s atmospheric physics.

Jupiter’s equatorial stratosphere displays a remarkable phenomenon – a periodic oscillation of temperatures and winds that was first discovered (by one of our coauthors) in 1991. The oscillation shows up as a band of equatorial air that shifts from being warmer than neighbouring latitudes to being cooler after several years, a result of vertical variations of stratospheric temperatures in bands that descend over time. This phenomenon is not unique to Jupiter and analogies are present on Earth (the 28-month Quasi-Biennial Oscillation, QBO) and Saturn (the ~15-year Quasi-Periodic equatorial Oscillation, QPO).

Earth’s QBO and Saturn’s QPO undergo significant disruptions in their regular patterns. These are thought to be the result of large amounts of stratospheric wave activity originating far from the equator, which propagate and interact to alter the equatorial stratospheric winds and temperatures. But could Jupiter’s ~4-4.5-year oscillation periodicity from 1980-2001 observations also be prone to similar significant disruptions, considering it hosts some of the most impressive weather in our Solar System?

To answer this question, we reanalysed all the data used in previous studies, increased the temporal sampling by adding new observations and included an additional decade of Jupiter infrared observations (sensing temperatures at the equatorial stratosphere) to cover a full three decades. With more data at our disposal we found that a constant period could not fit the 1980-2011 observations. Instead, we found two different periods – a 5.7-year period in 1980-1990, and a 3.9-year period in 1996-2006 and renamed the phenomenon Jupiter’s Equatorial Stratospheric Oscillation (JESO). We could not fit observations in 1990-1996 or 2007-2011, indicating that Jupiter’s equatorial oscillation is prone to significant disruptions, just like Earth and Saturn.  But Jupiter’s oscillation was not only disrupted, it also assumed a completely different period after 1990, unlike anything we have seen on Earth and Saturn. So what is different between the disruptions observed on Jupiter and those on Earth and Saturn?

A careful analysis of Jupiter’s stratospheric temperatures at higher latitudes showed the absence of any stratospheric perturbations that could have disrupted the equatorial oscillation between 1990-1996 and 2007-2011, suggesting that their nature is different from those on Earth and Saturn. Instead we found that JESO disruptions coincided with planetary-scale disturbances, known as ‘Global Upheavals’, much deeper in Jupiter’s atmosphere in 1990-1992 and 2007-2009. This suggests that vertically propagating waves from extreme meteorological events in the deep atmosphere can alter regular cycles of atmospheric variability higher up in the stratosphere.

Will the period change again following future global upheaval events?  Will it shift into a new period, or remain locked into the current one, like  Earth and Saturn? Continual monitoring of the Jovian atmosphere will help us answer these questions.

Acknowledgement:  This work was funded by a European Research Council Consolidator Grant, GIANTCLIMES (number 723890), which aims to study natural climate cycles on the four giant planets of our solar system.  Acquisition of the images was supported in part by NASA with funds to the Jet Propulsion Laboratory, California Institute of Technology. 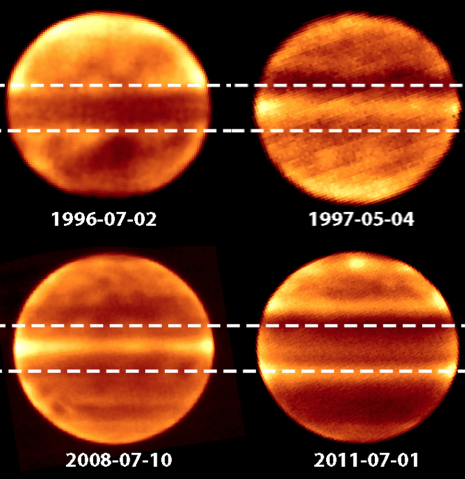 This figure shows Jupiter’s stratospheric brightness temperature at ±1° latitude within the equator  between 1980 and late 2011. The red solid line and the green dashed line represent the fittings of the observations and correspond to 5.7-year and 3.9-year periods, respectively. The black arrows indicate when the temperature deviates from the predicted periodicity, showing that Jupiter’s equatorial stratospheric oscillation was disrupted during these epochs.

Colour (RGB) images of Jupiter captured by Anthony Wesley (Australia) from 2 March 2007, and by Tiziano Olivetti (Thailand) from 2 January 2016, showing Jupiter’s cloud tops at the weather layer located at the troposphere, deeper than the stratosphere. The image on the left corresponds to the epoch at which Jupiter was undergoing one of the rare Global Upheavals, with the equatorial latitudes strongly disturbed compared to the image on the right (corresponding to an undisturbed epoch).