Posted by Physics & Astronomy in Leicester to Jupiter: The Juno Mission on May 26, 2017

Last month, planetary scientists from around the world met at the European Geophysical Union (EGU) conference in Vienna, and were treated to the first glimpse of long-awaited results from NASA’s Juno spacecraft. The atmosphere was one of surprise, excitement, and elation that this mission was starting to deliver new insights into the Solar System’s largest planet, ten months after its nerve-wracking arrival. But the main message was one of confusion: Juno is forcing scientists to re-evaluate their understanding of Jupiter, throwing out old theories, and making way for something new. It certainly makes this an exciting time to be a Jupiter scientist! 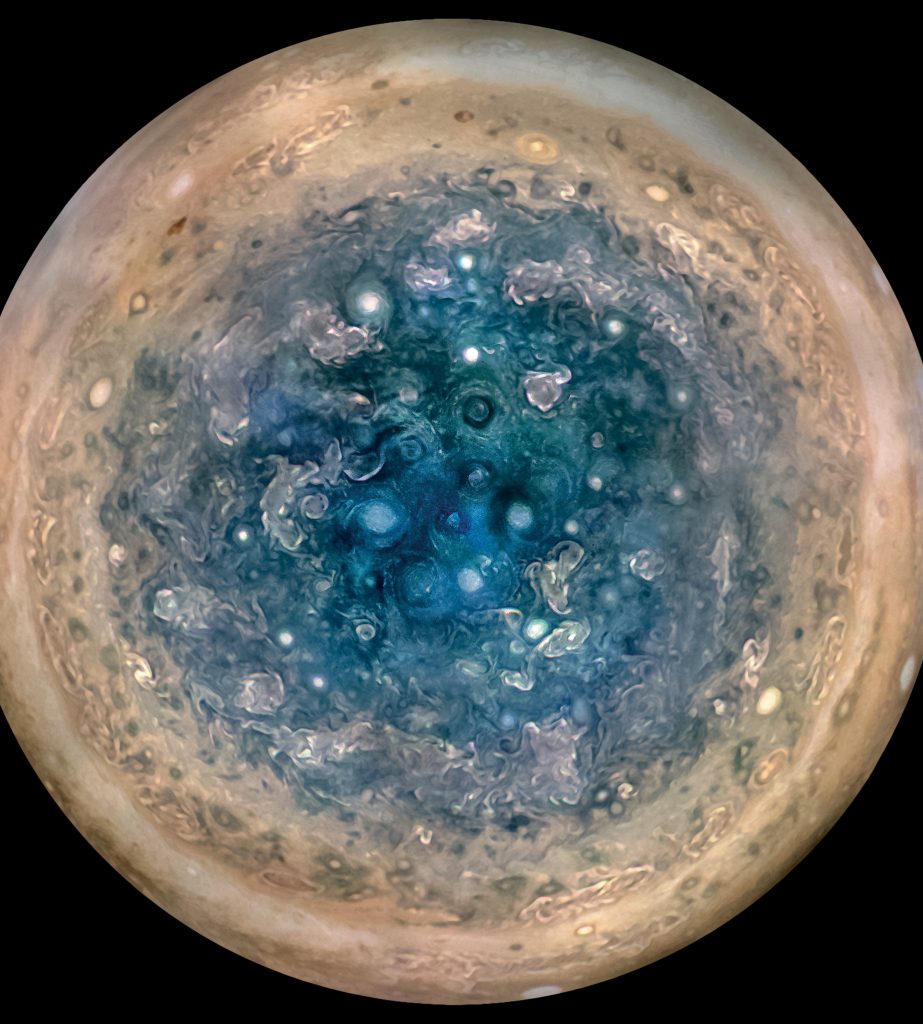 These first findings from Juno are published today in Science, and are supported by a whole host of new Jupiter papers published in a special collection of Geophysical Research Letters. Juno arrived at Jupiter in July 2016, and began a long, looping first orbit that took it far out from the planet before zipping back in for its first scientific close-up on August 27th. These close encounters are called ‘perijoves’, and last a short few hours as the solar-powered spacecraft flies from the north pole to the south pole, zipping within 4000 km of the equatorial clouds and beneath Jupiter’s most intense and damaging radiation belts. The challenge presented by Jupiter is extreme – Juno detected impacts and the resulting clouds of plasma from fast dust grains hitting the spacecraft, making the solar panels into enormous dust detectors. Despite this, it seems that the radiation damage so far is less than expected, meaning that Juno’s instruments might survive much longer than we’d hoped. Today, despite initial problems with Juno’s engine and spacecraft software, the mission has settled into a regular pattern of close perijoves every 53.5 days – the sixth such flyby happened on May 19th, the seventh will be on July 11th. But the new findings reported today are from that very first glimpse on August 27th, and everywhere we look, we find a planet that is defying our expectations.

Chaos at the poles

If you’ve ever been lucky enough to see Jupiter through a telescope, you’ll be familiar with the organised, striped structure of whiter zones and dark brown belts. These colourful bands are bordered by powerful jet streams whizzing east and west around the planet. On Saturn, the Cassini spacecraft has shown that this organised, banded structure persists all the way to the poles, with one of the most poleward jets showing a strange hexagonal wave pattern encircling a hurricane-like polar cyclone. But Jupiter’s poles are different. Gone is the organised structure of jets. There’s no evidence for hexagons or any other polygonal waves. And instead of one cyclone, we see multitudes, surrounded by a whole host of chaotic and turbulent features. With the ability to see structures as small as 50km, Juno’s camera has revealed numerous bright cyclones of a variety of appearances – some appear sharp, some have clear spirals, some are fluffy and diffuse, and the largest is some 1400 km across. That’s about the same distance between London and Majorca. These bright storms sit on top of dark background clouds, giving the appearance of ‘floating’ on a dark sea, and it’ll be some time until we understand the lifetimes and motions of these storms. But it is clear that our Earth-based view of striped Jupiter is biased, and that chaos reigns at Jupiter’s poles.

One particular feature stands out in those images – a polar cloud so high that is it catching the dying rays of sunlight at dusk. Standing some 60 km above the surrounding clouds (that’s the distance from London to Reading, for context), the icy particles comprising this cloud are still reflecting sunlight despite being on Jupiter’s nightside. This points to the strong forces at work shaping Jupiter’s atmosphere, and hints at three-dimensional structure that is hard to see from Earth.

Mysteries in the deep 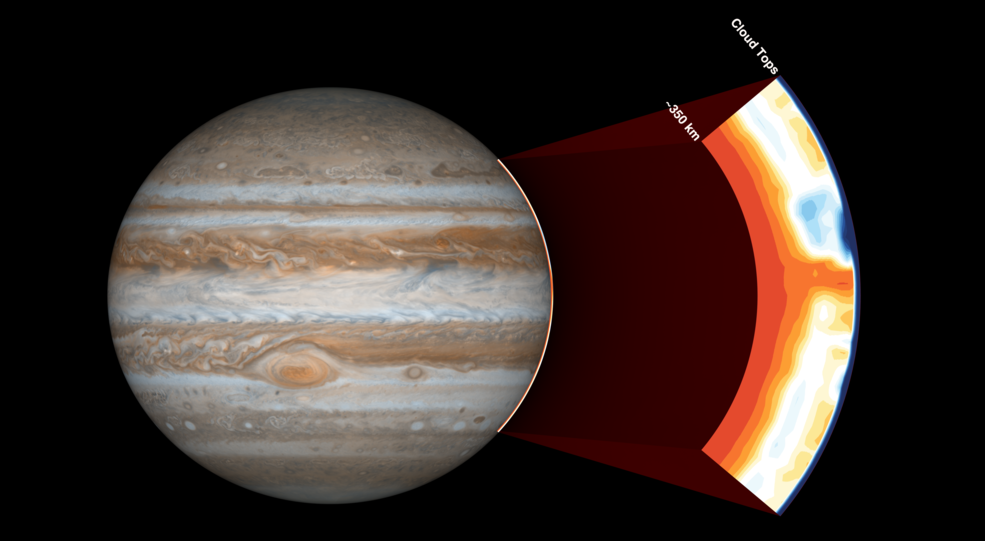 Initial results from Juno’s microwave radiometer, showing a plume of ammonia over the equator: Credits: NASA/JPL-Caltech/SwRI

One of Juno’s key strengths is the ability to peer through the overlying shroud of ammonia clouds, to probe the deep atmosphere down to ~350 km or so for the first time. We’ve never been able to see this deep before, so even the first observations from Juno’s microwave instrument provide a treasure trove of new insights. These show that the banded structure that we see at the cloud-tops is really just the tip of the iceberg – Jupiter exhibits banding all the way down to ~350km, much deeper than what we’ve generally thought of as Jupiter’s ‘weather layer’ in the upper few tens of kilometres. What’s more, that structure isn’t the same all the way down – it varies with depth, indicating a large, complex circulation pattern.

Another surprise came when scientists tried to replicate the brightness they observed in the microwave – these observations reveal the distribution of ammonia gas, one of Jupiter’s key cloud-forming species, and which was expected to be well mixed (i.e., drenched) below the topmost clouds. That idea has been turned on its head – the ammonia concentration is much less than expected. Intriguingly, much of the ammonia is concentrated into an equatorial plume, rising from the depths of Jupiter to the cloud-tops due to some powerful upwelling force. We’ve known that ammonia is enhanced at Jupiter’s equator for some time (we can measure this from Earth), but we never knew how deep this column went. It’s important to remember that this is only one location on Jupiter, and that Earth-based infrared observations suggest that the plume may not be this strong elsewhere around Jupiter’s equator, but could be ‘patchy’. Only with more perijove passes will we begin to understand the strange dynamics of Jupiter’s tropics.

Exploring the Gravity and Magnetic Fields

The surprises didn’t stop here. Juno can probe even deeper into the planet by monitoring small tweaks to the spacecraft’s orbit by the gravity field of Jupiter’s interior. Ultimately, these will be used to assess whether Jupiter possesses a well-defined core, but that cannot be done from a single perijove pass – at the moment, the measurements are inconsistent with any previous model, and possibly hint at a ‘fluffy’ core dispersed out to half of Jupiter’s radius, rather than being a well-defined core. Jupiter’s interior appears to be anything but uniform. We have to remember that scientists have spent years developing models of the interior of Jupiter based on sparse data taken from great distances – Juno is now testing these models to the extreme because it is flying so close, sampling the gravity field in a region that we’ve never been able to access before.

The same is true of the magnetic field measurements. Jupiter’s dynamo generates the most intense planetary magnetic field in the solar system causing a pile-up where the solar wind is slowed down (known as the bow shock). Juno first passed through the bow shock and into the jovian magnetospheric domain on June 24th. At closest approach, the strength of Jupiter’s magnetic field was twice as strong as any model predicted and much more irregular than expected. That’s important, because it hints that the magnetic field could be being generated at shallower depths than expected, above the ‘metallic hydrogen’ layer that is thought to exist at very high depths and pressures. If proven, this has substantial implications for studies of magnetic fields at all of the giant planets.

Out with the old

You might imagine that, faced with throwing out models that have taken careers to develop, scientists might be a little glum. But the exact opposite is true. A mission like Juno, accessing regions that no robotic spacecraft has ever probed before, is designed to test the models to the extreme. If they break, then the search to find the missing pieces of the puzzle will provide deeper insights into the physics of the jovian system. All these surprises have come from just the first perijove encounter, and from whispered words at that science conference in Vienna, I’m sure there are plenty more revelations to come.