The Birth of Giants

Posted by Physics & Astronomy in Leicester to Jupiter: The Juno Mission on July 20, 2016

Dr. Leigh Fletcher discusses how Juno could revolutionise our understanding of the origins of Jupiter via gravitational mapping of its internal structure.

The presence of Jupiter has had a profound influence on the architecture of our solar system, shaping the conditions that have led to the stable, habitable environment that exist here on Earth.  But it didn’t have to be this way.  Maybe the young Jupiter could have wandered in too far to the inner solar system, scattering all the young terrestrial worlds so that Earth never formed properly.  Or maybe Jupiter’s interaction with other giants could have ejected it completely, to be a free floating planet.  This might have meant that Jupiter never shaped the population of icy comets and watery asteroids that delivered key species – water, and maybe even the ingredients for life – to our forming home planet.  And maybe, without Jupiter’s stabilising presence, cataclysmic impacts could be going on to this day, never allowing intelligent life to develop on Earth? 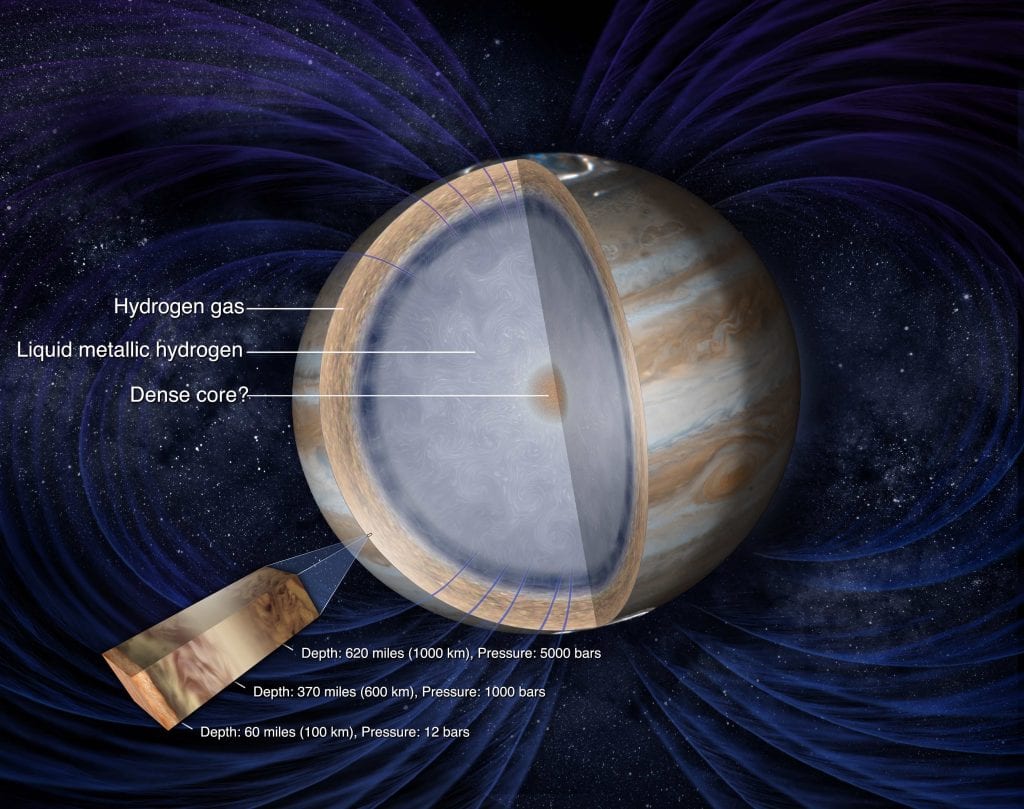 Probing the unknown interior of Jupiter with the Juno spacecraft, and the possible presence of a core. Credit: NASA

It’s likely that all of these scenarios have played out somewhere in our universe.  But Jupiter’s formation and influence on the other planets is key to the question of how our Solar System came to be.  And yet, there remains a surprisingly large gap in our understanding of how Jupiter first formed and how it evolved.  Three key questions remain unanswered – did Jupiter form with a massive protoplanetary core, is that core still present today (or are the heavy materials mixed throughout the planetary interior), and did accretion of icy materials massively enrich the water content of Jupiter?  Indeed, Jupiter can be thought of as a time capsule, its massive gravity being so powerful that the proto-planetary material from the birth of our solar system never managed to escape.  Resolve these mysteries and we’ll have a much better idea of how giant planets form, both in our Solar System and around other stars.

Two prevailing theories exist for the formation of Jupiter.  The favoured model is known as the core accretion theory, where a massive rocky core (a protoplanet, or planetary embryo) is formed first in the young solar system, and when it attains a high enough mass (somewhere around 10 Earth masses) it begins to suck in all the surrounding hydrogen and helium gas from the forming solar system, growing to become the giant we see today.  If that’s true, then the presence of the original core material will serve to enrich Jupiter’s chemical abundances over and above that found in the nebula.  The composition of our own Sun is a good measure of the composition of the original solar nebula, so we have a good point of comparison.  On the other hand, if no planetary core was required, then the planet could begin to form by gravitational collapse (just like a star). In this case, there’d be no significant enrichment in the planetary chemical abundances.  So, was a core required to form Jupiter, and is the planet’s chemical inventory enriched relative to the Sun?

NASA’s Juno mission is tantalisingly close to providing those answers via two techniques – precision mapping of the gravitational field, and microwave mapping to determine the composition of this time capsule far below the clouds.  We’ll look at the second point in a later blog post, but for now let’s look at Juno’s gravity mapping. 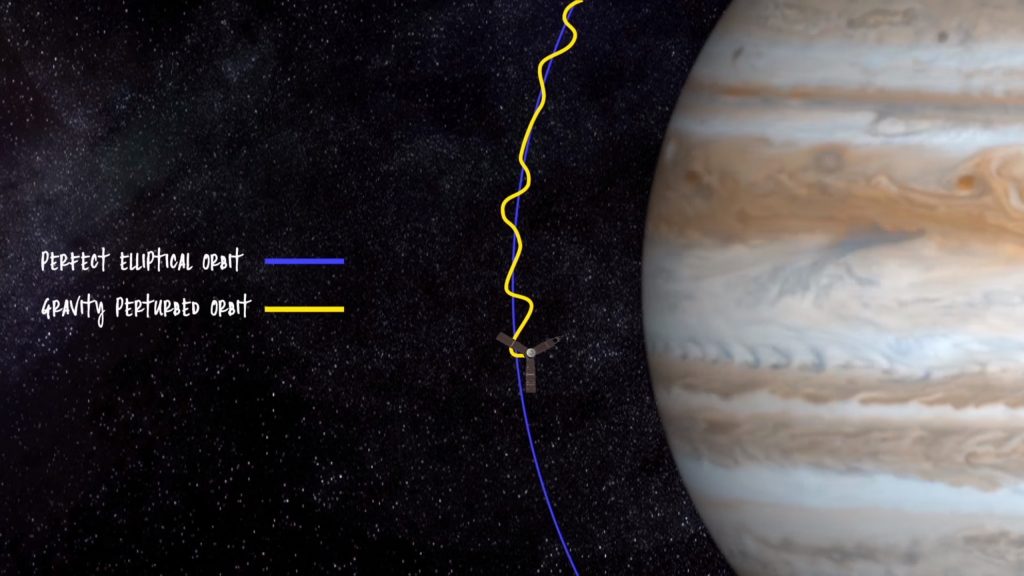 Juno’s close-in orbit is specifically designed to map the gravity field, as small changes in the interior distribution of densities will pull and tweak Juno’s orbit around Jupiter over its 37 orbits.    By monitoring the Doppler shift in Juno’s radio signal, Juno will be able to map those perturbations to assemble a 3D map of the insides of Jupiter.  If there are discrete layers, then the gravity mapping should be able to reveal their depth and the density changes.  For example, if a rock/metal core exists – the remnant of the protoplanet that initiated Jupiter’s formation – then maybe Juno will be able to detect its gravitational signal.  At the very least, Juno will probe the exotic transitions in Jupiter’s hydrogen-helium mixture as it is compressed by crushing pressures (up to 30-50 million bar) and temperatures (tens of thousands of degrees) at the planet’s centre.

The main expected phase transition is to a bizarre state called metallic hydrogen – at high pressures, hydrogen’s single electron can be detached from its proton and allows it to become electrically conducting.  Droplets of helium and neon might rain out in this strange fluid.  The properties of metallic hydrogen are poorly understood, given that it might only be produced for fleeting instances between diamond anvils in labs on Earth (and this is highly contested), so this could all add a lot of complexities to interpreting Jupiter’s gravity field.  We think the metallic hydrogen layer might start about 25% of the way down, where temperatures exceed 10000 degrees and pressures exceed 2 million bar, but this is highly uncertain.  To put that in perspective, the pressure of the Earth’s core is around 3-4 million bar.  Furthermore, convective motions in this fluid might have served to erode any original protoplanetary core away, redistributing its materials over the aeons since the planet first formed.  Nevertheless, if Juno detects the presence of a core it would be a smoking gun for the core accretion theory of planetary formation.

One response to “The Birth of Giants”