After finishing my PhD at the Carceral Archipelago project in September 2017, I became the Pearsall Fellow in Naval and Maritime History at the Institute of Historical Research. This involved not only a move to London, but a move into a new discipline. As a historian of punishment, I was interested in the way that histories of convict transportation overlapped with dockyards.  Six months into my research project, investigating convict labour on the British imperial dockyard at Gibraltar, it’s becoming clear that convicts lives were very much shaped by their proximity to seamen, including their labour, their clothing and the discipline they were subjected to.

Arthur Griffiths, brigade-major at Gibraltar and Comptroller of Convicts in 1869, described his first sighting of the prison gang in distinctly maritime terms. He wrote: ‘They might have been a pirate’s or a slaver’s crew; their costume was nautical, a tarpaulin hat, round jacket, wide duck trousers and low shoes.’[i] Tarpaulin hats were made of canvas and waterproofed with paint or tar and were standard waterproof headgear for seamen. [ii] Round jackets and duck trousers were naval regulation standard by the mid-nineteenth century, and the convicts seemed to be wearing cast off naval slops.[iii] It seems logical that at least some of the convict gangs would wear mariners’ waterproofed attire, since dredging bays, ferrying rocks in rowboats, and placing heavy stones for the New Mole Breakwater ‘with their bodies half way up in water’ were liable to keep convicts ‘wet through for much of the day’. [iv] 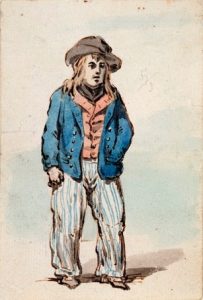 As convicts worked together with free men on the dockyards, lines between them became blurred. Convicts, like seamen, were ‘easily recognised’ by ‘their swarthy, weather beaten complexions…[and] muscular well-knit frames’.[v] In the 1889 novel Ticket of Leave Man, convict Jem Dalton’s time in Gibraltar allows him to ‘pass’ as a ‘seaman on a cattle steamer’, after he escapes the convict establishment, and return to England ‘disguised by his sunburnt skin and seafarer’s manner’ to exact revenge on our hero. [vi] This fictional portrayal speaks to wider fears about that released convicts could hide in plain sight, thanks in part by the trades learnt on the dockyard. 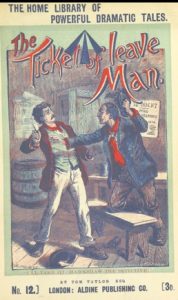 The discipline on the penal settlement was also influenced by the naval department, who superintended part of the works. In the 1840s, for example, convicts were provided ‘a half gill of rum’ at 11 AM and 5PM, which they drank from a trough. [vii] This mirrored the daily allowance of diluted rum, known as grog, to Royal Naval seamen in the Victorian era.[viii] Convicts were also allowed to use part of their earnings, to buy goods, usually tobacco, which they were allowed to smoke in the evening in the barracks. Though official correspondence cited health reasons for grog allowance, it seems likely that the convict authorities feared insubordination if they were banned from drinking and smoking, which were provided to the sappers and dockyard workers whom they worked alongside.

Stoppage of grog was the most common form of punishment for minor offences, yet drunkenness caused more disciplinary refractions than it prevented. In 1854, the acting overseer, stated that he “half of the offences were committed when the men were excited by rum”.[ix] For more serious offences, convicts were flogged with a ‘cat o’nine tails’ whip against the ‘flogging mast’, and during an investigation Dr William Baly concluded that the whip which was used was an old naval cat, which was ‘much heavier than any now used in the government prison and hulks at home, or in the army.’[x] As the project continues, I will continue to investigate how the naval and military influence of the Gibraltar garrison effected how convicts experienced penal servitude on Gibraltar in the mid nineteenth century.

[iii] Seems to be stipulated in 1891 regulations – mentioned in Simon Wills, tracing your seafaring ancestors: A guide to maritime photographs for family historians (Barnsley: Pen and Sword, 2016).