In this blog post I review the documentary ‘A Secret History of my Family: Gadbury Sisters’, which aired in 2016, and discuss how it reflects changing attitudes to convict ancestry amongst British and Australian descendants. It is re-blogged from the the wonderful History on the Box in which postgraduate students from the School of History, Politics and IR at the University of Leicester write about the representation of history in TV and film. It uses the vast archive of broadcast material in Box of Broadcasts, maintained by the British Universities Film & Video Council. Please do check out both the History on the Box blog, and watch the documentary on BOB too (your university must subscribe)!

This hour-long documentary  takes an unusual approach to tell its story. Rather than relying on historians and archivists ‘talking heads’, it’s narrated by descendants. It tells the story of the three Gadbury sisters: Caroline, Sarah and Mary Ann, who roamed East London in gangs of child pickpockets in the 1830s. When the youngest sister Mary Anne was caught smuggling 20 yards of linen under her skirts from a haberdashery shop: she was arrested along with her accomplice sister, Caroline. Not long after, the eldest sister, Sarah was also arrested for theft. Sarah and Caroline were sentenced to transportation to different colonies in Australia: Van Diemen’s Land (now Tasmania) and New South Wales respectively. Their linen-smuggling sister, Mary Anne, on the other, received only six months in prison, probably because she had less priors than her elder sisters. From here the narrative splits to follow the life-stories of each sibling, and the lives of their respective lines of descendants. 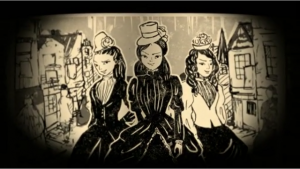 The story is not just told by descendants, they become protagonists in it as they reflect on their feelings towards their convict ancestry. From the start of transportation to the late-twentieth century, convicts and their descendants tried to hide their unlawful past: changing their names, destroying records and keeping it secret from friends and family. Caroline’s ancestor admits that he did not know growing up that he was descended from a convict, and Sarah’s ancestor describes being bullied on the playground with taunts of ‘convict’. In this sense, it is indeed the titular ‘Secret History of My Family’. Since the 1970s, there has been a huge shift in attitudes towards convict ancestry, driven by and reinforced by family historians and genealogists (now numbering 4 million in Australia and 9 million in the UK). Where convict records were formerly restricted, digitisation and databasing of convict records mean you can now trace a convict from their trial, to prison or hulks, on the voyage and up till they earn their ticket-of-leave in Australia (through websites like: Old Bailey Online, Ancestry.com, Founders and Survivors, Convict Records). This has its own set of ethical issues: discovering an ancestor who was transported for petty theft (as the Gadbury sisters, and indeed the majority of Australian convicts were) is much more palatable than those who were convicted of sexual assault or violent crimes.

The Australian convict descendants are not just accepting of their felonious roots, they are proud of them. The documentary opens with actors portraying juvenile convicts in interviews conducted by the criminologist William Miles as he attempted to theorise if criminality was inherited from parent to child. The Australian descendants of Sarah and Caroline Gadbury also place a strong emphasis on inherited traits. But instead they see their convict ancestors as particularly resilient, innovative and strong-willed. Sarah Gadbury’s misdemeanours against her employer after being assigned as a convict servant in Van Diemen’s Land is taken by her ancestors as an inter-generational legacy, saying: ‘Her personality has flowed through the family to make us who we are…her strength is running through my veins, my blood’. In stark contrast, the descendants of Mary Ann, who remained in the vicinity of Shoreditch, take pride in generations of lawfulness. The Wardleys stress that Mary never re-offended after her six-month stint in prison, and that her descendants also steered clear of crime. Her great-great-great grandson says of his (grand)children: ‘All around ‘em, their mates getting nicked…not one of them, ever ended up in court. Through one person going straight and altering her life, made my life’.

The idea that psychological values – whether resilience or lawfulness – are inherited are common tropes of popular history documentaries. Programmes like Who Do You Think You Are? imply that genealogies are essential parts of our identity, even if we have not been aware of them. The vast and detailed record-sets relating to convict transportation (that were described above) have enabled academics to research what the inter-generational legacies of conviction are. The records for convicts like Sarah who were transported to Van Diemen’s Land were the most detailed for a population anywhere in the world in the nineteenth century. Registers include convicts’ place of birth, details of conviction, past employment, literacy and – most richly of all – physical characteristics including weight, height, eye and hair colour, complexion and tattoos. Research projects like Founders and Survivors and Digital Panopticon trace the economic opportunities and biometric impact of being transported to Australia versus people that stayed behind. When a society is made up only of convicts, the opportunity to own land and fill numerous jobs are given to people who had been trapped in cycles of poverty at home: within a few decades their diets and living conditions outstripped their counterparts in Britain, resulting in taller and healthier children. As the programme traces the family-trees of each sister it becomes clear that inter-generational effect falls broadly in favour of those that were transported. The programme calls the Australian penal colony ‘a great social experiment’ and encourages us to see the effects of historical events as they reverberate across generations.

One response to “Attitudes to Convict Ancestry: Documentary Review”