Protection for Whom? Aboriginal rights in the Swan River Colony

Posted by Carrie Crockett in Carceral Archipelago on May 15, 2016 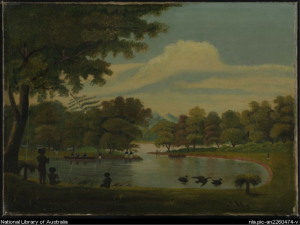 In June 1829, Governor James Stirling founded the Swan River Colony on the mainland of Western Australia. Whilst the hype surrounding the new colony attracted almost 2000 people to Swan River in the first year, few of these initial settlers concerned themselves with the rights of those they were dispossessing. Furthermore, although Stirling had initially been intrigued by the qualities of these ‘warlike people’ during an expedition in 1827, he later adopted a more unforgiving view, believing the ‘natives’ would not hesitate to attack the colonists if an opportunity presented itself. [1] As a result, official reports from this period are filled with damning descriptions of their behaviour, as the Colonial government sought to justify its increasingly hostile stance towards the Aboriginal tribes of Western Australia.

The establishment of Australia’s first free colony coincided with a humanitarian movement that sought to protect the interests of native populations in the wake of the abolition of the slave trade. [2] Which eventually culminated in the report of Britain’s Select Committee on Aborigines in 1837. However, despite these concerns the founding documents produced by the British government for Swan River contained no specific instructions on the rights of the Aboriginal people. [3] In an attempt to resolve this omission and define the Aborigines status within the colony one of Stirling’s first acts as governor was to highlight their right to protection under the British Law.

‘I do hereby give notice that if any Person or Persons shall be convicted of behaving in a   fraudulent, cruel or felonious manner towards the Aborigines of the country, such person or persons will be liable to be prosecuted and tried for the offence’. [4]

Whilst much of the settlers’ time and emotions were initially consumed by the difficulties inherent in establishing a new colony, their continued ignorance of Aboriginal culture soon turned interest in the ways of their new neighbours into outright hostility. The colonists rarely recognised how Aboriginal culture, spirituality and ways of knowing were all constituted through their relationship to land, this non-recognition allowed them to deny Nyoongar’s claim to sovereignty over their own lands. This denial of sovereignty is evidenced by the transition from diplomacy between Governor Stirling’s administration and the leaders of the Nyoongar community in the early years of settlement, to their persecution and execution. [5] Community leader Yagan was incarcerated along with his father Midgegooroo in 1832, having been charged (under British Law) with ‘murdering’ a settler. After their escape they became wanted criminals and were killed, by the government and a settler respectively, in circumstances, which Stirling later felt the need to justify in his correspondence with the Secretary of State for War and the Colonies, Lord Glenelg.

‘By these persons, although they were severe, the natives learnt practically to respect the power and fear the vengeance of the whites, two points on which it may seem strange to assert that they were beforehand incredulous or ignorant.’ [6]

The feeling of superiority this produced amongst the British soon led to the customs of Aborigines being dismissed as the traditions of ‘simple savages’. Similarly, while the Aboriginal people had initially been accepting of the Europeans settlers, they too became increasingly resistant to the dispossession of their lands.

Evidence of this deterioration can be seen in the frequent acts of violence that arose within the colony, as both the colonists and Aborigines sought to establish their possession. As a result of these incidents Stirling came under increased pressure to provide the settlers with protection from the ‘depredation of the natives’. [7] Despite many of these ‘attacks’ having been the result of the Aborigines being forced to defend themselves, Stirling repeatedly refers to their ‘hostile conduct’ and tendency to ‘commit robbery or murder’. [8] Consequently, one of the first measures implemented by Stirling to ensure Aboriginal ‘protection’ was the establishment of a police force that would assist in ‘keeping the peace’ and ‘maintaining order’. [9] However, an examination of the regulations and instructions provided for the guidance of the police demonstrates their presence was mainly concerned with preventing native attacks.

‘There is reason to apprehend that outrage and violence may occasionally be committed by the native tribes on the property and persons of the colonists, these acts it will be the duty of the superintendent to prevent to the utmost of their power.’ [10]

In addition, the police were also required to keep a ‘register’ of the native tribes, and present a monthly report of their movements to the governor. [11] Contrary, to Stirling’s hopes, close monitoring of the natives did not cause them to comply with the colonist’s wants, as complaints concerning their behaviour continued to plague the colonial office.

Demonstrating his concern over these ‘ruptures’ Stirling alerted Lord Glenelg, to the implausibility of explaining the principles of law ‘under which white men lived’ without the establishment of more intimate communications with local tribes. [12] As he notes, the ignorance which existed between the natives and colonists precluded this possibility. As a result of this ‘imperfect intercourse’ Stirling recognised the urgency in acquainting the Aborigines with the British Law. But, whilst he was keen to enforce peace Stirling was also aware of the injustice of ‘imposing municipal regulations of an invading people’ upon indigenous subjects. However, this doubt was dismissed when compared with the ‘benefits’, namely protection, the proposed measures would bring to the ‘less civilised’ party. [13] In line with this belief a decision was made to place the tribes closest to Perth under his ‘protection’. This ‘protection’ was to be accomplished by giving an ‘intelligent and competent person’ the general superintendence of the natives, to instruct them by acts, as well as by words in the general principles of the British law. In consequence of these proceedings the natives quickly came to understand that any transgressions would result ‘sooner or later’ in the ‘severest penalties’. Whilst acts committed upon the Aborigines by the settlers were often overlooked, or if brought before a magistrate, were, for the most part, found not-guilty.

As well as trying to bring the Aboriginal people within the bounds of the law, Stirling’s strategy also encouraged the natives to make themselves useful to the colonists, mainly as guides or labourers. [14] In the hope that this would ‘recompense’ the settlers for any previous ‘depredations’ they had committed, thus, encouraging the Aborigines to become reliant on the settlers for food, and other commodities. [15] Ending any pretence that the natives were equal in status, as these measures gradually achieved their oppressive aim.

As the decade wore on contempt for the natives continued to increase following Stirling’s decision to publish a government notice on ‘Native Behaviour’, under the guise that this would enable them to be better ‘understood by the community’. Published in 1837, the notice discussed the increased ‘audacity’ of the natives, and provided the colonists with specific instructions on how to protect themselves.

‘by keeping his arms in order, by associating with his neighbours in mutual support, by withdrawing in the way of the natives any temptation to robbery, by not exposing himself to attack through going about unarmed and alone as this will tend to discourage offensive acts on the part of the natives’. [16]

This insistence on portraying the Aborigines as a child-like race, in need of a firm-hand, provided the colonists with a readymade defence for the atrocities they later went onto commit. Ultimately, the measures which were put into place during the colony’s first decade were inevitably more concerned with protecting the colonists, than the colony’s native inhabitants. The eventual outcome therefore of this attitude put in place a structural inequality in favour of the colonisers that would continue to plague society throughout Western Australia’s colonial period, and beyond.

[16] SROWA: AU WA S1180 Cons 42/3, Government Notice Regarding Native Behaviour, Colonial Secretary’s Office, July 21st 1837
Kellie Moss
After graduating in Modern History at De Montfort University in 2012 and completing an MA in history at the University of Leicester, Kellie Moss was awarded a Graduate Teaching Position with the School of History in 2013. Her research centres on the global integrations of convicts in Western Australia between the years 1850-1868, addressing the circulation and utilization of convicts from within the British Empire. Kellie is also currently an affiliated researcher on the ERC Carceral Archipelago project (2013-2018) coordinated by Prof. Clare Anderson.