Dating the Social Death of the Eighteenth Century Criminal. By Rachel Bennett

Posted by Emma Battell Lowman in Carceral Archipelago on June 23, 2015

In April 2015 I presented a paper at a conference held at the University of Leicester entitled ‘When is Death?’ The conference was organised by members of the Wellcome Trust funded project, Harnessing the Power of the Criminal Corpse. My PhD has been conducted as part of this project. The conference sought to investigate the areas of legal, medical and social death across vast geographical and chronological parameters. An overarching theme that connected the extensive range of papers was that death is better understood as a process rather than an instantaneous occurrence and, to quote Thomas Laqueur, becoming really dead takes time. In this blog I want to further explore the issue of social death in relation to the criminals of the eighteenth century.

My research is focused upon the use of capital punishment in Scotland between 1740 and 1834. It charts the journey of the criminal from their committing the crime and standing trial through to the scene of their public execution and the enacting of any post-mortem punishment upon the corpse. Within this, as my research has developed what has become increasingly apparent is that the death of the criminal did not necessarily occur upon the scaffold and is a more complex process subject to an indeterminate chronology.

When a person was apprehended on suspicion of their having committed a crime the evidence against them would be gathered and the witnesses in the case called to appear before the superior criminal courts of Georgian Britain. The criminal would be tried by the jury and, if found guilty, would hear their fate when the judges pronounced their sentence to the court. In my research I have argued that the passing of a death sentence for crimes of a capital nature signalled the beginning of a criminal’s legal and social death. In his scaffold speech Hugh McLeod, who was to be executed for murder and robbery in Inverness in 1831, told the spectators “I am as a dead man addressing you; I am dead by the law since my sentence was passed”. In this sense comparisons can be drawn with those who received the sentence of transportation who were to be sent across the seas to Britain’s American and later Australian colonies. Receiving the sentence of transportation in court signified the initial stage of social death and their removal from the realm continued the process.

For those who received a capital punishment, on the day scheduled for their public execution they would be taken via a procession from the place of confinement to the place of execution. Once upon the scaffold they would be allowed to give their last dying speeches to the spectators gathered and receive their final religious instruction before taking their place at the end of the hangman’s rope. Contemporary accounts often described what happened next as the offender being “launched into eternity”. After the obligatory hour or so the body would then be cut down and, if sentenced to receive some further mark of infamy through the enacting of a post-mortem punishment, they would be taken to a specified location. My research argues that even after all of this was complete, and a criminal was physically dead, for some the point of their social death remained indeterminate.

One case I would like to focus upon in particular is that of James Stewart. He was executed after he was found guilty ‘art and part’ of the murder of Colin Campbell in 1752. The case occurred during the political tensions that were still evident in parts of Scotland following the 1745 Jacobite Rebellion. It garnered much contemporary debate, especially over Stewart’s guilt. Despite the circumstantial nature of the evidence against him he was capitally convicted and subsequently executed at the south end of Ballachulish, near Lochaber in Scotland. His body was then hung in chains for a further eighteenth months as a stark deterrent to all who encountered it. However, even after the completion of his physical death and the post-mortem punishment of his corpse, he was still not socially dead. 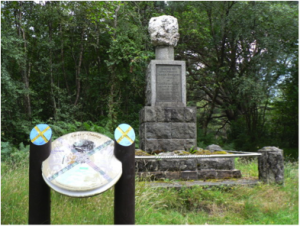 The above monument was erected in 1911 to commemorate James Stewart and states that he had been executed “for a crime of which he was not guilty”. Previous blogs by members of the Carceral Archipelago project have highlighted the challenges the project faces in reconciling the histories and heritage of convict transportation as well as indigenous peoples and other settler histories. To an extent, comparisons and contradictions over social death can thus be drawn beyond the history of capital punishment to the histories and legacies of the punishment of transportation in the wider British Empire. In the case of James Stewart, his social death continues to be fraught with contentions two and a half centuries on from his physical death. The almost universal belief that he was innocent of the crime for which he suffered led to a movement, beginning in 2008 that is ongoing, to obtain a pardon for him in order to finally clear his name. This again demonstrates that he is yet to become socially dead.

In addition to the indeterminate point of social death for some of Scotland’s most infamous criminals, we can also question the commemoration of the country’s capital punishment history in Edinburgh. The common place of public execution between 1660 and 1784 was the Grassmarket, in the city’s ‘Old Town’. Today visitors to the site can have a drink in the aptly named Last Drop pub and listen to the gruesome tales of Scotland’s bloody criminal history on one of the many walking tours of the area. As well as commemorating their history of punishment, the city also offers the opportunity to show your distaste for such. The Heart of Midlothian stone is located next to St Giles on the famous Royal Mile. It marks the spot where the door to the city’s old tolbooth used to be before it was taken down in the early nineteenth century. It is believed that people passing the tolbooth would spit at its door to show their contempt for the squalid conditions inside. Subsequently the custom of spitting on the heart for good look has developed and it has also become an emblem of Edinburgh’s Heart of Midlothian football club. 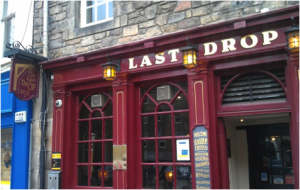 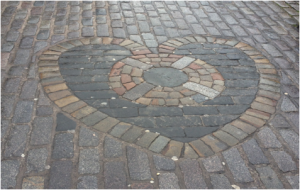 The Heart of Midlothian, located near St Giles, Edinburgh. Photographed by author 2013.

What is clear from the continuing pervasive attraction of historians and non-academics alike to the history of crime and punishment is that the criminals who suffered the full weight of the law may never be truly dead just as the sites of capital punishment, penal colonies and prisons act as continued, and sometimes even celebrated, reminders of our criminal past.

Rachel Bennett is currently in the final year of her PhD which has been conducted as part of the Wellcome Trust funded project, Harnessing the Power of the Criminal Corpse. Her thesis investigates the use of capital punishment in Scotland in the eighteenth and early nineteenth centuries. It examines various points of the journey of the criminal from the court to the public execution upon the scaffold. It then questions the uses, meanings and treatment of the criminal corpse beyond the point of physical death.