Posted by Clare Anderson in Carceral Archipelago on July 21, 2014

Having been aware of the work of The Clink Charity, an innovative and exciting initiative which establishes restaurants in prisons, I was thrilled to hear that the latest one to benefit was HMP Brixton, not far from where I live. The Clink has been established with the aim of “educating prisoners and equipping them with the skills and tools to secure employment upon their release”. Both being intrigued and wishing to support the charity’s work, fellow CArchipelago researcher, Eureka Henrich and I booked ourselves in for breakfast. 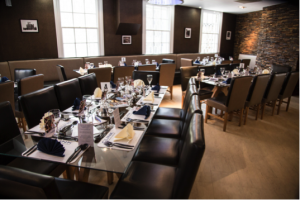 Inside The Clink, HMP Brixton. Image courtesy of The Clink Charity.

Both of us have had extensive experience of visiting prisons which have been opened as heritage sites. Eureka’s recent blogpost and work on CArchipelago has examined representations of sites of incarceration in Australia. I’m looking at the history of the prison buildings on the so-called Prison Island in Zanzibar, which now house a hotel and restaurant, as well as earlier research into the museum in Number Four, a notorious prison in Johannesburg. As such we were both familiar with the mediated heritage experience of stepping behind prison walls and the academic discourse surrounding prison heritage and memory.

I had previously once been into a working prison, as part of an outreach project through my job at the British Museum. On this occasion, I ran a session for inmates at HMP Holloway, using handling objects to instigate conversations about the significance of our personal possessions and identity. My focus on that occasion was on the workshop and engaging the female inmates – an experience at some times challenging and at others profoundly moving.

While it is fair to say that everyone is familiar with the symbol of the prison building and their physical features – high walls surmounted by barbed wire, bars on the windows and the basic accommodation of cell-life – in fact very few of us have stepped inside a working prison complex. Eureka and I were keen to seize this opportunity as well as to observe the way in which projects such as this are designed for prisoners to gain skills to increase their employability on release, ultimately to reduce the likelihood for re-offending.

We convened half an hour before our reservation to complete the security process. A special entrance has been set up to manage The Clink guests – existing entrances include those for the prison staff and visitors for family and friends of inmates. After our warm greeting and security briefing, passports, phones and other potentially dangerous items – including aerosols – had to be left in special lockers. We were then led through a series of large gates, each with their own guard and procedures.

Our arrival coincided with a change in the shift for the prison staff and we thus witnessed the large numbers dropping off and collecting keys, sharing stories from the previous shift. We were struck by the vast number of people employed by the prison. One naturally tends to focus upon the experience of the inmates, but a wide and varied constituency creates the institution’s daily life; not just warders but cleaners, caterers and teachers. While confinement, restriction and incarceration remain the purpose of the prison, there is in fact a constant flow of people entering and departing. The Clink restaurant was located within this porous zone.

The interior of the restaurant was beautifully arranged, a chic and clean design. Only small elements reminded us that we were in a prison – the plastic cutlery and the prints on the wall – including contemporary photographs of HMP Brixton and reproductions of 19th century prints. One of the latter, near our table, depicted hard labour imposed upon the prisoners. This form of punishment – a treadmill – was introduced at the house of correction in Brixton in 1822. In addition to being a gruelling disciplinary measure for 30 inmates at a time, it also drove a millstone to make grain for bread. It was designed to lead to the ‘improvement of discipline’.

The image served as a sobering reminder of the former practices which occurred on this site in the name of ‘improvement’ – a stark contrast to the positive and progressive opportunities offered by working within The Clink. But it also led us to discuss the types of displays seen in many prison museums, which emphasise the gruesome punishments of a distant past to the detriment of more problematic histories and connections to the present.

Our meal was delicious and elegantly presented, definitely on a par with fine dining available elsewhere in the capital. The waiters were attentive, efficient and informative. And clearly such training can transform lives – the current national reoffending rate is 46.9%; The Clink’s graduate rate is 12.5%.

Not only were we able to support this important work and enjoy a fantastic meal, but the setting stimulated conversations which have offered new perspectives on our analyses of the complexities of and interactions in prison spaces. While London’s restaurant scene buzzes outside with pop-ups and new openings, we would encourage people to visit The Clink to savour the food and experience another, often hidden, aspect of this complicated city.