At the weekend, I travel to the UAE to participate in ‘How Migration Makes Meaning: A Conference on Slavery in the Atlantic and Indian Ocean,’ an event hosted by NYU Abu Dhabi. I am looking forward to a productive few days, and the opportunity to work through collectively the intellectual trajectory of connections between Atlantic and Indian Ocean studies with respect to the transit of people, ideas, practices and objects across imperial space, and the experiential dimension of these complex mobilities. The organisers of the conference bring together a group of scholars from across academic disciplines, and have invited each of us to think about how we might compare, contextualize and represent the histories that we tell with respect to other methods and contexts. In my paper, I am going to talk about the imperial politics of comparison: the multiple overlaps and coalescences across apparently distinct migrations and labour regimes, stretching from the Caribbean to West Africa, and to Asia and Australia. My interests include enslavement, convictism, apprenticeship and indentured servitude; and my objective is to explore how people at the time experienced various kinds of forced migration, and how they thought about apparently distinct labour regimes.

Following Christian de Vito’s fascinating historical geography of the convict presidios of Spanish Empire in a previous Carceral Archipelago project blog, I spent some time mapping the imperial scope of my conference paper. Though I have been interested in the methods, practices and comparisons of global history for many years now, I was astonished at the striking visual representation of connected history that my map seems to represent. For in my paper I tell the story of the penal transportation of Bussa’s Rebels, the removal of the 1816 Barbados slave rebels to other Caribbean spaces and, ultimately, across the Atlantic to Sierra Leone, the principal imperial site for the forced settlement of black British loyalists from America, Jamaican maroons, and ‘liberated Africans,’ the illegally trafficked slaves captured by British patrols into so-called ‘freedom.’ Layered beneath my mapping of the Barbados slave rebels’ extraordinary journey, and a further focus of my paper, are the intersections between slave emancipation and the production of new types of coerced labour and, it seems to me, the vital question of whether and how imperial unfreedom took different forms across different imperial spaces.

I am mindful in my work of the need to decentre particular kinds of history: history that celebrates partial events as though they were universal (e.g. the abolition of slavery in the British Caribbean); history that celebrates benevolent Empire but refuses to engage with its often less-than-benevolent aftermath; history that lacks precision in its textual occlusion or elision of uncomfortable truths of exploitation. And so, in the second part of my paper, I look to connect my story of the Atlantic world with that of the Indian Ocean, to explore the texture of pan-imperial connection and variegation, and to draw out the complexities of other kinds of forced mobilities stretching from the Bay of Bengal to the Tasman Sea. Key to understanding my purpose in detailing various local contexts, is an appreciation of the relationship between the local and the global: particularly the globality and connectedness of various coerced migrations, and the ways in which they spanned metropolitan, Atlantic and Indian Ocean worlds and European Empires. 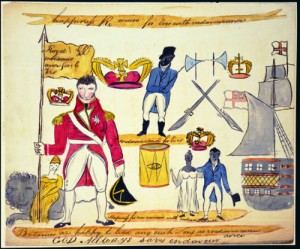