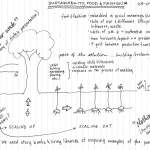 Scaling Out: Thinking About Sustainability, Food and Fashion

Posted by Jennifer Smith Maguire in School of Business Blog on November 11, 2015

Senior Lecturer in Cultural Production and Consumption at the School, Jennifer Smith Maguire, considers the outgrowths of a recent School based workshop Several years ago I bought a schizostylis coccinea ‘Jennifer’ plant. I was attracted by the promise of autumn colour, and — embarrassing to admit — the cultivar’s name. I hadn’t anticipated the astounding […]

Raising a Glass to the English Wine Industry: Why we will be cracking open the English Fizz this Christmas

Posted by Sarah Robinson in School of Business Blog on December 23, 2014

Senior Lecturers in Organisation Studies, Sarah Robinson and Elke Weik, get us in the seasonal spirit: Cheers! We are both wine lovers and organisational researchers, curious about the factors underpinning the growing success of English wine. How, we are interested in finding out, in the short space of 40 years, has this industry developed from […]

How to Sell Success, Failure and Fanaticism? Understand the Customer!

Posted by Georgios Patsiaouras in School of Business Blog on June 2, 2014

Georgios Patsiaouras, Lecturer in Marketing and Consumption at the School, draws sobering lessons from the popularity of the recent Hollywood Blockbuster, The Wolf of Wall Street.  Martin Scorsese’s latest film is an adaptation of Jordan Belfort’s memoir of the same name. Critics have lamented the film’s unachieved goal of thematically and stylistically suffusing the fast […]

Thoresby Colliery and the Art of Minecraft

Posted by James Fitchett in School of Business Blog on April 30, 2014

James Fitchett, Professor of Marketing and Consumer Research at the School, traces the historical evolution of socio-economic illness in a Midlands city UK Coal recently announced the closure of the last remaining coal mines in Britain. The proposal will see the pits face a phased shutdown, with UK Coal’s six surface mines being sold off […]